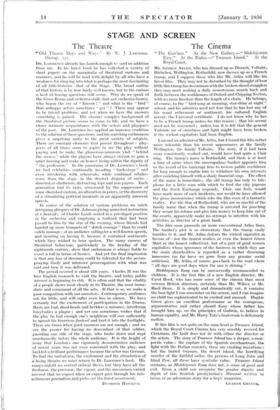 "The Guv'nor." At the New Gallery.—" Midshipman Easy." At the Rialto.—" Treasure Island." At the Royal Court.

Mn. GEORGE Aimss, who has dressed up as Disraeli, Voltaire, Richelieu, Wellington, Rothschild, now dresses up as a French tramp, and I suppose those who like Mr. Arliss will like his latest film. They may not be disturbed by the thought of how little this tramp has in common with the broken-shoed stragglers they may meet making a daily monotonous march back and forth between the workhouses of Oxford and Chipping Norton, with no more freedom than the length of a chain. He belongs, of course, to the bird-song at morning, star-shine at night" school, and his admirers need not fear that he has lost any of his usual refinement or sentiment, his cultured English

accent, the Universal certificate. I do not know why he has to be a French tramp unless for this reason : that his accent need not be coarsened ; unless too it is felt that the general Yuletide air of sweetness and light might have been broken if the wicked capitalists had been English.

I am not an admirer of Mr. Arliss, but I found this film rather more tolerable than his recent appearances as the family Wellington, the family Voltaire. The story, if it had been more consistently worked out, would have had quite a Clair ring. The tramp's name is Rothschild, and there is at least a hint of satire when the unscrupulous banker appoints him to the board of his bankrupt firm to restore public confidence for long enough to enable him to withdraw his own interests

after enriching himself with a shady financial coup. The effect

of the name is immediate ; the old tramp has only to tele- phone for a little corn with which to feed the city pigeons and the Stock Exchange responds. Clair, one feels, would have made more of such incidents, nor would he have allowed the gross inconsistency which robs the film even of a fantastic reality. For the firm of Rothschild, who are so careful of the family name that when the tramp is arrested for poaching they secure his release and give him money to keep him out of the courts, apparently make no attempt to interfere with his activities as director of a great bank.

The film soon proceeds on more conventional Arliss lines. The banker's plot is so elementary that the tramp easily tumbles to it, and Mr. Arliss defeats the wicked capitalist in favour of—not the honest worker, or even the honest Green Shirt or the honest collectivist, but of a pair of good women capitalists whose ignorance of the business in which they are the main shareholders is regarded as a rather disarming innocence (so far have we gone from any genuine social criticism). Mr. Arliss, of course, goes back to the road where "all days are good days when the sun is shining."

Midshipman Easy can be unreservedly recommended to children. It is the first film of a new English director, Mr. Carol Reed, who has more sense of the cinema than most veteran British directors, certainly than Mr. Wilcox or Mr. Basil Dean. It is simply and dramatically cut, it contains the best fight I can remember on the screen, and Jean imagine no child too sophisticated to be excited and amused. Hughie Green gives an excellent performance as the courageous, argumentative and rather absurd Easy whose father has brought him up, on the principles of Godwin, to believe in human equality, and Mr. Harry Tate's boatswain is deliciously mellow.

If this film is not quite on the same level as Treasure Island, which the Royal Court Cinema has very sensibly revived for Christmas, the fault does not lie with either the director or the actors. The story of Treasure Island has a deeper, a mon' poetic value : the capture of the Spanish merchantman, the, fight -with the Italian convicts, these are exciting inventions : but the buried treasure, the desert island, the horrifying murder of the faithful sailor, the persons of Long John and blind Pew, all these have symbolic value. Treasure Island contains, as Midshipman Easy does not, a sense of good and evil. Even a child can recognise the greater dignity and depth of this Scottish presbyterian's Mansoul written in terms of an adventure story for a bOys' magazine.