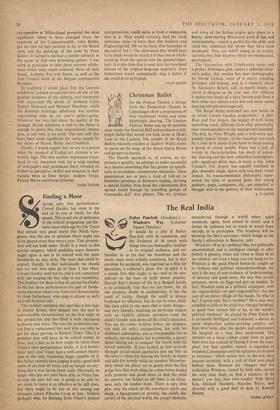 Pather Panchali. (Academy.) Windom's Way. (Leicester Square Theatre.) IT would be a pity if Pather Panchali, with its reputation, and the freshness of its touch with' things that are thoroughly familiar to its original audience, and un- familiar to us (so that the humdrum and the exotic seem most artfully combined, but in fact combine by accident), was regarded as a film for specialists, a collector's piece. For in spirit it is a simple film that ought to be—and to be con- sidered—in the best of both senses popular. Satyajit Ray's picture of life in a Bengali family is so artistically true that we can never, for all our distance, doubt its authenticity; it has the smell of reality, though the smell is always freshened by affection; but its eye is more child- like than adult in the sense that it views things— and very literally, touching on particular objects with an explicit, delicate precision—with the child's wonder and above all the child's tolerance. You see the rather feckless father, for instance, not with his wife's exasperation, but with his children's admiration; not as irresponsible but as unlucky, not as pathetic but as romantic, a jaunty figure setting out to conquer the world with his furled umbrella. If you looked at him severely through social-realist spectacles you see him as the story's villain for leaving the family in doubt and debt for months while he wanders Micawber- ishly about the place; yet so gently does the film judge him that even when he comes home loaded with -presents and good cheer. to find the child his poverty has helped to kill there is no bitter- ness, only the kindest irony. There is very little plot, only the events of life anywhere—birth and death, a background of poverty, the child's dis- covery of the physical world, the crone's fantastic

meandering through a world wherc adult standards, again, have ceased to count; and it invites its audience not so much to watch from outside, as to participate. The Academy will be showing the film's successor, which brings us the family's adventures in Benares, next.

Windom's Way is a political film, but politically uncommitted; and is intelligent enough to offer (which is gloomy, when you come to think of it) no solution, not even a hope you can hang on to. Windom is the good liberal humanist caught up in violence and political misunderstandings; his way is the way of non-violence, of understanding, of decency and good sense, the way that avoids extremes, waves no flags and gets no medals. In fact, Windom ends as a political scapegoat, with the responsibility—or part responsibility—for the ruin of an entire village on his hands. So what is he? A good man, but a meddler? Or a man who meddled as little as he could but who got involved, as good men cannot fail to be, in the world's political madness? As played by Peter Finch he is eminently intelligent and balanced, a doctor in some unspecified rubber-growing country out East who looks after the people and administers his hospital in a way they understand. The workers on a local rubber estate want to grow their own rice instead of buying it from the com- pany, but their modest request is regarded as incipient Communism and the agitators are treated as terrorists : which means that, in the end, they become terrorists, with a trail of their own dead behind them. Between his villagers and the authorities Windom, trusted by both sides, seems the only -man likely to find a solution. If he doesn't, you feel, then who would? With Mary Ure, Michael Hordern, Natasha Parry; and directed with a good deal of dash by Ronald Neame.