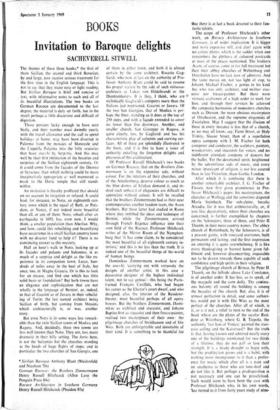 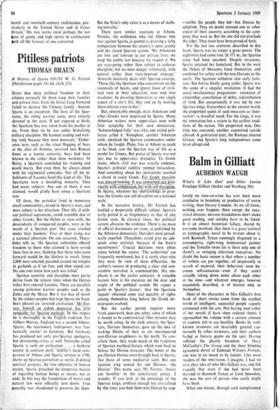 The themes of these three books,* the first of them Sicilian, the second and third Bavarian, by and large, now receive serious treatment for the first time in the English language. This is not to say that they make easy or light, reading. But Sicilian Baroque is brief and concise of text, with informative notes to each and all of its beautiful illustrations. The two books on German Rococo are documented to the last degree, the material is duly set forth, but in the result perhaps a little'discursive and difficult of digestion.

Those persons lucky enough to have. seen Sicily, and their number must dwindle yearly with the travel allowance and the call to spend holidays at home. may have been diverted in Palermo from the mosaics of Monreale and the Cappella Palatina into the little oratories that have stucchi by Serpotta. And this may well be their first intimation of the beauties and surprises of the Sicilian eighteenth century. Or it could come from the facades of the Duomo at Syracuse, than which nothing could be more imaginatively appropriate or well mannered as mask to the Doric temple that still stands within.

An invitation is thereby proffered that should on no account be forgotten or refused. It could lead, for instance, to Noto, an eighteenth cen- tury town which is the equal of Bath, or Pots- dam, or Nancy, if not indeed more beautiful than all, or any of them. Noto, rebuilt after an earthquake in 1693, has, even now, I would think, a smaller population than Aberfan. Why, and how, could this rebuilding and beautifying have occurrence in a small Sicilian country-town with no disaster fund to help it? There is no convincing answer to this mystery.

Half an hour's walk in Noto, looking up at its façades and palaces and balconies, is as much of a surprise and delight as the like ex- perience in its companion town, Lecce, hun- dreds of miles away in the heel of Italy, but once, too, in Magna Graecia. Or is this to look for an excuse, and find one which has little solid basis or foundation? But both towns have an elegance and sophistication that are not wholly in the language of Bernini: or, indeed, in that of Guarini or of Juvara in their rebuild- ing of Turin: the last named architect being Sicilian of birth, but coming from Messina which architecturally is, or was, another story.

But even Noto is in some ways less remark- able than the twin Sicilian towns of Modica and Ragusa. And, decidedly, these two -towns are less well known than Noto. They are, too, more dramatic in their hilly setting. The forte, here, is not the balconies but the churches standing at the heads of huge flights of steps; and in particular the two churches of San Giorgio, one * Sicilian Baroque Anthony Blunt (Weidenfeld and Nicolson 70s)

of them in either town, and both it is almost certain by the same architect, Rosario Gag- liardi. who now at last on the authority of Pro- fessor Anthony Blunt could be said to resume his proper stature by the side of such virtuoso- architects as Lukas von Hildebrandt or the Dientzenhofers. It is they, I think, who are stylistically Gagliardi's compeers more than the Italians just mentioned, Guarini or Juvara. Of the two San Giorgios, that of Modica is per- haps the finer, standing as it does at the top of 250 steps, and with a facade extended to cover no fewer than five doorways. Another, and smaller church, San Giuseppe in Ragusa, is quite clearly, too, by Gagliardi and has his characteristic play of columns and curving sur- faces. All of these are splendidly illustrated in the book, and it is fine to have a voice of authority extolling the forgotten delights and pleasures of this architecture.

Of Professor Russell Hitchcock's two books on German Rococo, that on the Brothers Zim- mermann is on the expensive side, without colour. For the interiors of their churches, and of the Amalienburg, deserve colour as much as the blue domes of Isfahan demand it. and in- deed such unheard of elegancies are difficult to appreciate without colour. It will be recalled that the brothers Zimmermann had as their near contemporaries another tandem team, the Asam brothers. But these latter had studied in Rome where they imbibed the ideas and technique of Bernini, while the Zimmermanns arrived through French Regence influence into their own field of the Rococo. Professor Hitchcock writes of the Mirror Room of the Nymphen- burg that 'it has some claim, to be considered the most beautiful of all eighteenth century in- teriors,' and this is no less than the truth. It is indeed one of the beautiful things of the-world of human beings.

Dominikus Zimmermann worked here on the stucchi, 'carrying out with virtuosity the designs of another artist, in this case a decorative designer of the highest individual talent, not to say genius'—this being the Paris- trained Francois Cuvillits, who had begun his career as the Elector's court dwarf, and who designed, also, the interior of the Residenz- theater, most beautiful perhaps of all opera houses. But the brothers Zimmermann, Domi- nikus as architect and stuccoist, and Johann Baptist first as stuccoist and then fresco-painter, realised two masterpieces of their own : the pilgrimage churches of Steinhausen and of Die Wies. Both are unforgettable and inimitable of their kind. It is something to be thankful for

that there is at last a book devoted to their fan- tastic talents.

The scope of Professor Hitchcock's other work, on Rococo Architecture in Southern Germany. is of wider implication. It is bigger and more expensive still, and alas! again with no colour plates. which is the sadder when one remembers the plethora of coloured postcards at most of the places mentioned. The brothers Asam, of course, come in for full treatment but then their abbey churches of Weltenburg and Osterhofen have no lack now of admirers. And the tome moves on, not too light of step, to Johann Michael Fischer. a genius in his kind

but who was only architect, and neither slue-

• coist nor fresco-painter. But there were virtuosi craftsmen of a high order to work for him, and through their services he achieved the composite harmonies of monastery churches such as Diessen, the more obvious masterpiece of Ottobeuren, and the supreme elegancies of Zwiefalten. May I suggest that the illusion of these in every instance is less that of a church, as we may all know, say, Farm Street, or Holy Trinity, Sloane Street, than of a superlative opera company with J. M. Fischer for both composer and conductor, the sculptors, painters, woodcarvers. and stuccoists for voices, and no indifferent attendant company of dancers for the ballet. Yet the devotional spirit, heightened by the adventitious aids of music, and every minor intoxicant of religion, is not less assured than in late Victorian, sham Gothic London.

After which it is confusing that there is another remarkable architect, J. G. Fischer of Risser', now first given prominence in Pro- fessor Hitchcock's pages; his masterpieces, the churches at Wolfegg and the sometime disputed Maria Steinbach. The sub-alpine, bucolic Arcadia, for it was that architecturally, or, if you like, decoratively, where their churches are concerned, is further exemplified by chapters on the Schmuzers, three of them, and Peter II Thumb, in their mere country names. The abbey church of Rottenbuch, by'the Schmuzers, is of a peasant gaiety, with vineyard overtones, built permanent and lasting. and the first impression on entering it is quite overwhelming. It is like every thanksgiving or harvest home given ful- filment and, however disconcerting, impossible not to be drawn towards those capable of such confidence and high spirits in their religion.

The pilgrimage church of Birnau, by Peter H Thumb, on the hillside above Lake Constance, is of another order. It has less, so to speak, of the maypole and the corn dolly. The continu- ous balcony all round the building is among the beauties of this church. But, also, it is of utmost perfection in detail, and some authori- ties would put it with Die Wies as the most perfect of the churches. After all of which, is it, or is it not, a relief to turn to the end of the book where are the plates of the secular Resi- denz at Wfirzburg, where G. B. Tiepolo, the authentic 'last lion of Venice,' painted the stair- case ceiling and the Kaisersaal? But the truth is that, having known and admired nearly every one of the buildings mentioned for two thirds of a lifetime, they do not pall or lose their strength. It is a heady draught to begin with, but the predilection grows and is a habit, with nothing more incongruous to it than a prefer- ence for music which after all is a pain and an anathema to those who are tone-deaf and do not like it. But perhaps a predisposition is not necessary and one can be proselytised. Such would seem to have been the case with Professor Hitchcock who, in his own words, 'has turned to it from forty years study of nine-

teenth and twentieth century architecture, par- ticularly in the United States and in Great Britain.' His two works extol perhaps the last $ime of gaiety and high spirits in architecture pith all the fervour of one converted.