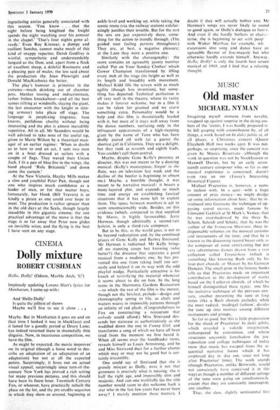 Hello, Dolly! (Odeon, Marble Arch, V') Impiously updating Lorenz Hart's lyrics for Manhattan, I came up with: And `Hello Dolly' Is quite the jolliest of shows Maybe we'll live to see it close .

Maybe. But in Manhattan it goes on and on (last time I looked it was in blackface) and it lasted for a goodly period at Drury Lane; has indeed returned there in shamefully thin disguise. Now, in incestuous competition, we have the film.

As might be expected, the movie improves' on its original (though a loose word to des- cribe an adaptation of an adaptation of an adaptation) but not at all the expected points. Surprisingly, it loses out on actual visual appeal; surprisingly since turn-of-the- century New York has proved a rich setting for many previous pictures, and this should have been its finest hour. Twentieth Century Fox. or whoever, have practically rebuilt the place on the lot, and the pre-credits sequence in which they show us around, beginning at ankle-level and working up, while taking the scenic route (via the railway station) exhilar- atingly justifies their trouble. But for the rest the sets are just expensively there, some- thing for the action to trundle through. (The guided tour feeling persists throughout.) They are, at best, a negative pleasure; at the Lane they were a positive one.

Similarly with the choreography: the score contains an agreeably jaunty number called Tut on Your Sunday Clothes' which Gower Champion transformed by filling every inch of the stage (its height as well as its length and breadth) with movement. Michael Kidd fills the screen with as much agility (though less invention), but some- thing has departed. Technical perfection is all very well in the theatre, where its rarity makes it forever welcome, but in a film it can be taken for granted and we crave something extra. Personality would be a help and this film is theoretically loaded with it, but most of it stays well away from the dance numbers, surfacing only in the infrequent appearances of a high-stepping giant by the name of Tune who has been drolly paired off with (at a guess) the shortest girl in California. They are a delight, but they rank as seventh and eighth leads. You couldn't call them central.

Maybe, despite Gene Kelly's presence as director, this was not meant to be a dancing musical. (Kelly's masterpiece, Singin' in the Rain, was on television last week and the decline of the hoofer is beginning to obsess me.) Maybe, a horrible thought, it was meant to be narrative musical: it boasts a many-layered plot, and expends so much time and energy on establishing farcical situations that it has none left to exploit them. The space between numbers is apt to seem unconscionably wide. Besides, on this evidence (which, compared to that supplied by Manic, is highly favourable), Jerry Herman, though admittedly a second-rate lyricist, is only a third-rate composer.

But to be this, as the world goes, is not to be beyond redemption and, by the combined graces of Gene Kelly and Barbra Streisand, Mr Herman is redeemed. Mr Kelly brings off no stunning coups but knowing (who better?) the distance that separates a good musical from a mediocre one, he has pre- vented this one from taking itself too seri- ously and helped it on its way with the odd playful nudge. Particularly attractive is his knack of revivifying the material whenever it seems about to die on him. In the long scene in the Harmonia Gardens Restaurant —to which the rest of the film is the merest, though not the briefest, prelude—design and choreography spring to life, as chefs and waiters weave in impossible patterns through an infinity of red plush. (Congratulations to Fox on constructing a restaurant that nobody could afford.) Miss Streisand des- cends her staircase as authoritatively as she waddled down the one in Funny Girl, and transforms a song of which we have all been tired from the moment we first heard it. When .all seems over the bandleader turns, reveals himself as Louis Armstrong, and he and Miss Streisand duet for a further chorus which may or may not be good but is cer- tainly irresistible.

One could say of Streisand that she is grossly miscast as Dolly, were it not that grossness is precisely what is missing; she is half the right age, and impossibly slim and majestic. And can one truthfully (as the title number would seem to do) welcome back a star who in the last few years has never been away? I merely mention these matters; I

doubt if they will actually bother you. Mr Herman's songs are never likely to sound so good again, or Dolly's dialogue so funi'v. And even if she hardly bothers to charac- terise, she is beginning to act with peop' with Walter Matthau for example, wh, excursions into song and dance have an agreeable flavour of lose-majeste but who otherwise hardly extends himself. Anyway. Hello, Dolly! is only the fourth best screen musical of 1969, and I find that a relaxing thought.