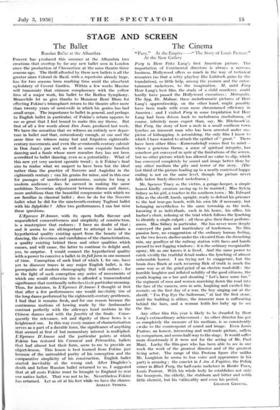 Fury is Herr Fritz Lang's first American picture. The importation of Continental directori is always a nervous business, Hollywood offers so much in the way of technical resources (so that a witty playboy like Lubitsch gains by the translation), so little help, among the yesmen and the enter- tainment racketeers, to the imagination. M, until Fury Herr Lang's best film, the study of a child murderer, could hardly have passed the Hollywood executives ; Metropolis, The Spy, Dr. Mabuse, these melodramatic pictures of Herr Lang's apprenticeship, on the other hand, might possibly have been made with even more chromiumed efficiency in America ; and I visited Fury in some trepidation lest Herr Lang had been driven back to melodrama (melodrama, of course, infinitely more expert than, say, Mr. Hitchcock's).

But Fury, the story of how a mob in a small southern town lynches an innocent man who has been arrested under sus- picion of kidnapping, is astonishing, the only film I know to which I have wanted to attach the epithet of " great." There have been other films—Kameradschaft comes first to mind— where a generous theme, a sense of spiritual integrity, has somehow got conveyed in spite of the limitations of the screen, but no other picture which has allowed no value to slip, which has conveyed completely by sound and image better than by any other medium the pity and terror of the story. (The last third of the picture leading up to a neatly contrived happy ending is not on the same level, though the picture never falls below finely-directed melodrama.) Mr. Spencer Tracy as the victim, a garage-keeper, a simple honest kindly creature saving up to be married ; Miss Sylvia Sidney as his girl, a teacher in the southern town ; Mr. Edward Ellis as the sheriff, harsh, upright, ready to defend his prisoner to the last tear-gas bomb, with his own life if necessary, but belonging nevertheless to the same township as the mob, knowing it as individuals, each in his home, his office, his barber's chair, refusing at the trial which follows the lynching to identify a single culprit : all these give their finest perform- ances. Miss Sidney in particular. She has never more deeply conveyed the pain and inarticulacy of tenderness. No film passion here, no exaggeration of the ordinary human feeling, as the two lovers shelter under the elevated from the drenching rain, say goodbye at the railway station with faces and hands pressed to wet fogging windows : it is the ordinary recognisable agony, life as one knows it is lived. And the same power to catch vividly the truthful detail makes the lynching of almost unbearable horror. I am trying not to exaggerate, but the brain does flinch at each recurring flick of truth in much the same way as at the grind-grind of an electric road-drill : the horrible laughter and inflated nobility of the good citizens, the youth leaping on a bar and shouting " Let's have some fun," the regiment of men and women marching down the road into the face of the camera, arm in arm, laughing and excited like recruits on the first day of a war, the boy singing out at the sheriff, " I'm Pop Eye the Sailorman," at last the first stone, until the building is ablaze, the innocent man is suffocating behind the bars, and a woman holds her baby up to see the fire.

Any other film this year is likely to be dwarfed by Herr Lang's extraordinary achievement : no other director has got so completely the measure of his medium, is so consistently r.wake to the counterpoint of sound and image. Even Louis Pasteur, an honest, interesting and well-made picture, suffers by comparison, and seems half-way to the stage. It would suffer more disastrously if it were not for the acting of Mr. Paul Mimi. Lucky the film-goer who has been able to see in one week the work of the greatest director and of the greatest living actor. The range of this Protean figure (for unlike Mr. Laughton he seems to lose voice and appearance in his part) is amazing : the convict in I Am A Fugitive, the Polish miner in Black Fury, the half-caste racketeer in Border Town, Louis Pasteur. With his whole body he establishes not only the bourgeois, the elderly, the stubborn and bitter and noble little chemist, but his rtatiozality and even his period.