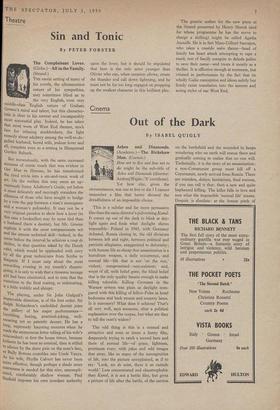 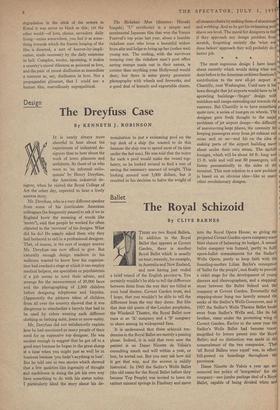 Out of the Dark

This is a subtler and far more persuasive film than the same director's pulverising Kanal. It comes up out of the dark to blink at day- light again and finds what daylight shows impossible: Poland in 1945, with Germany defeated, Russia closing in, the old divisions between left and right, between political and patriotic allegiance, exaggerated to deformity; with human life so cheap that assassination is a humdrum weapon, a daily occurrence, and normal life—life that is not 'on the run,' violent, compromised—non-existent; and, worst of all, with belief gone, the blind belief that is the only quality fanatic enough to make killing tolerable. Killing Germans in the Warsaw sewers was plain as daylight com- pared with this killing of fellow-Poles in hotel bedrooms and back streets and country lanes. Is it necessary? What does it achieve? That's all very well, says someone, after a political explanation over the corpse, but what are they to tell the man's widow?

The odd thing is this is a sensual and attractive and even at times a funny film, desperately trying to catch a second here and there of normal life—of grace, lightness, prettiness even; with jokes and odd images that stray, like so many of the incongruities of life, into the picture unexplained, as if to say: 'Look, we do exist, there is an outside world.' Less concentrated and claustrophobic than Kanal, it is not a battle film, but gives a picture of life after the battle, of the carrion on the battlefield and the wounded in heaps wondering who on earth will rescue them and gradually coming to realise that no one will. Technically, it is the story of an assassination: a non-Communist group must kill off a Communist, newly arrived from Russia. There are mistakes, delays, hesitations, final success, if you can call it that: then a new and quite haphazard killing. The killer falls in love and sees what the impossible 'normal life' means. Despair is absolute: at the lowest pitch of degradation in the stink of the sewers in Kanal it was never so black as this; yet the other world—of love, choice, unviolent daily living—exists somewhere, you feel it as some- thing towards which the frantic longing of the film is directed, a sort of heaven-by-impli- cation, made necessary by the daily existence in hell. Complex, tender, agonising, it makes a country's moral dilemma as personal as love, and the pain of moral disillusion as immediate a torment as, say, disillusion in love. Not a propagandist glimmer, that I could sec: a human film, marvellously suprapolitical. The Rickshaw Man (director: Hiroshi Inagaki; `I.J' certificate) is a simple and sentimental Japanese film that won the Venice Festival's top prize last year, about a humble rickshaw man who loves a beautiful widow from afar and helps to bring up her (rather wet) young son. The ending, with the survivors weeping over the rickshaw man's post office saving stamps made out in their names, is cornier than anything even Hollywood would dare; but there is some pretty geometric photography with wheels and fireworks, and a good deal of homely and exportable charm.