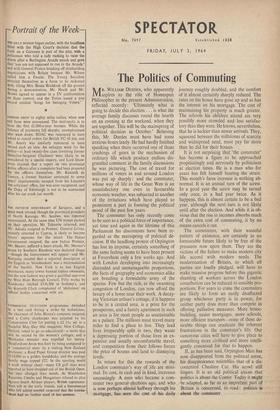 The Politics of Commuting

MR. WILLIAM DEEDES, who apparently aspires to the role of Homespun Philosopher in the present Administration, reflected recently: 'Ultimately what is going to decide this election. . . is what the average family discusses round the hearth on an evening at the weekend, when they are together. This will be the mainspring of political decision in October.' Believing this, Mr. Deedes must have had some anxious hours lately. He had hardly finished speaking when there occurred one of those crashings of gears in the mechanism of ordinary life which produce endless dis- gruntled comment 'at the family discussions he was picturing. The cost of travel for millions of voters in and around London was put up sharply : and the commuter, whose way Of life in the Great Wen is an unsatisfactory one even in favourable economic weather, was subjected to another of the irritations which have played so prominent a part in forming the political mood of the past few years.

The commuter has only recently come to be seen as a political force of importance, yet time and again in the lifetime of this Parliament his discontents have been re- garded as the mainspring of political de- cision. If the headlong protest of Orpington has lost its impetus, certainly something of the same feeling seems to have been present at Faversham only a few weeks ago. And with London developing into increasingly distended and unmanageable proportions, the facts of geography and economics alike are breeding a formidable army of the species. Few but the rich, in the swarming congestion of London, can now afford the luxury of a home near their work. A decay- ing Victorian artisan's cottage, if it happens to be in a central area, is a prize for the prosperous, and a family apartment in such an area is for most .people as unattainable as a palace. The millions must travel many miles to find a place to live. They lead lives irreparably split in two they waste a depressing portion of those lives in ex- pensive and usually uncomfortable travel, and competition from their fellows forces the price of houses and land to dismaying levels.

In return for this the rewards of the London commuter's way of life are mini- mal. Its cost, in cash and in kind, increases unceasingly. A man who became a com- muter two general- elections ago, and who is now perhaps almost halfway through his mortgage, has seen the cost of his daily journey roughly doubled, and the comfort of it almost certainly sharply reduced. The rates on his house have gone up and so has the interest on his mortgage. The cost of maintaining his property is much greater. The schools his children attend are very possibly more crowded and less satisfac- tory than they were. He knows, nevertheless, that he is luckier than newer arrivals. They, squeezed between the millstones of scarcity and widespread need, must pay far more than he did for their houses.

It is not surprising that 'the commuter' has become a figure to be approached propitiatingly and nervously by politicians at election times. He is a man who for years has felt himself bearing the strain. This month's fares increase is nothing ab- normal. It is an annual turn of the screw. In a good year the screW may be turned only once, in a bad year twice. As it happens, this is almost certain to be a bad year, although the next turn is not likely until after the election. And while it is ob- vious that the rise in incomes absorbs much of the extra cost of commuting, it by no means cancels it out.

The commuters, with their wasteful pattern of existence, are certainly in no foreseeable future likely to be free of the pressures now upon them. They are the victims of the failure to make modern city life accord with modern needs. The modernisation of Britain, to which all parties are loudly pledged, will have to make massive progress before this gigantic shunting of workers across the London conurbation can be reduced to sensible pro- portions. For years to come the commuters are likely to form an easily disaffected group whichever party is in power, for neither party does more than compete in offering palliative measures. More house- building, easier mortgages, more schools, more efficient transport—none of these de- sirable things can eradicate the inherent frustrations in the commuter's life. Our cancerous cities will have to give place to something more civilised and more intelli- gently conceived for that to happen. If, as has been said, Orpington Man has now disappeared from the political scene, his disappearance resembles that of a dis- contented Cheshire Cat. His scowl still lingers. It is an old political axiom -that politics is about the Centre. Today it might be adapted, so far as an important part of Britain is concerned, to read : politics is about the commuter.