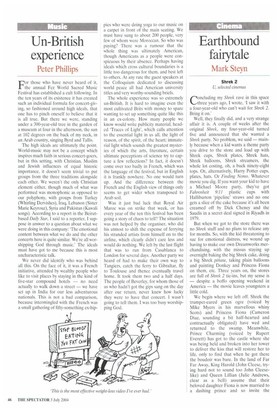 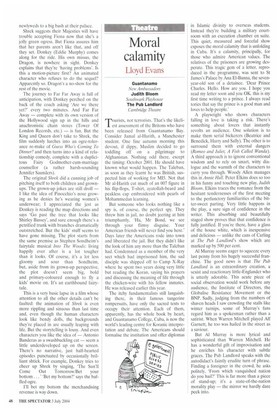 Concluding my Shrek rave in this space three years ago, I wrote, 'I saw it with a four-year-old who can't wait for Shrek 2. Bring it on.'

Well, they finally did, and a very strange affair it is. A couple of weeks after the original Shrek, my four-year-old turned five and announced that she wanted a Shrek party. No problem, we said — mainly because when a kid wants a theme party you drive to the store and load up with Shrek cups, Shrek plates, Shrek hats, Shrek balloons, Shrek streamers, the whole lot costing, oh, a buck ninety-eight tops. Or, alternatively, Harry Potter cups, plates, hats. Or Finding Nemo. Whatever movie you dig. If you want your kid to have a Michael Moore party, they've got Fahrenheit 9111 plastic cups with Halliburton 'pipeline' straws and no one gets a slice of the cake because it's all been creamed off by Dick Cheney and the Saudis in a secret deal signed in Riyadh in 1979.

But when we got to the store there was no Shrek stuff and no plans to release any for months. So, with the kid threatening to sue for emotional distress, we wound up having to make our own Drearnworks merchandising, with the missus staying up overnight baking the big Shrek cake, doing a big Shrek piñata, taking plain balloons and painting Donkey and Princess Fiona on them, etc. Three years on, the stores are full of Shrek 2 tie-ins, but my sense is — despite a boffo opening weekend in America — the movie leaves youngsters a little cold.

We begin where we left off. Shrek the trumpet-eared green ogre (voiced by Mike Myers in his marvellous whiny Scots) and Princess Fiona (Cameron Diaz. sounding a bit half-hearted and contractually obligated) have wed and returned to the swamp. Meanwhile, Prince Charming (voiced by Rupert Everett) has got to the castle where she was being held and broken into her tower to deliver the kiss that will restore her to life, only to find that when he got there the boudoir was bare. In the land of Far Far Away, King Harold (John Cleese, trying hard not to sound too John Cleeselike) and Queen Lillian (Julie Andrews, clear as a bell) assume that their beloved daughter Fiona is now married to a dashing prince and so invite the newlyweds to a big bash at their palace.

Shrek suggests their Majesties will have trouble accepting Fiona now that she's a jolly green ogress. But Fiona assures him that her parents aren't like that, and off they set. Donkey (Eddie Murphy) comes along for the ride. His own missus, the Dragon, is nowhere in sight. Donkey explains that they're 'having problems'. Is this a motion-picture first? An animated character who refuses to do the sequel? Apparently so. Dragon's a no-show for the rest of the movie.

The journey to Far Far Away is full of anticipation, with Donkey perched on the back of the coach asking 'Are we there yet?' every two minutes. And Far Far Away — complete with its own version of the Hollywood sign up in the hills and anachronistic chain stores (Tower Of London Records, etc.) — is fun. But the King and Queen don't take to Shrek, the film suddenly lurches into an ogre-tolerance re-make of Guess Who's Coming To Dinner? and then turns into a kind of relationship comedy, complete with a duplicitous Fairy Godmother-cum-marriage counsellor (a rather harsh-sounding Jennifer Saunders).

The original Shrek did a cunning job of pitching itself to both children and grownups. The grown-up jokes are still droll — I like the idea of Pinocchio's nose growing as he denies he's wearing women's underwear; I appreciated the jest as Donkey is reading the map directions and says 'Go past the tree that looks like Shirley Bassey', and sure enough there's a petrified trunk with branches dramatically outstretched. But the kids' stuff seems to have gone missing. The plot starts from the same premise as Stephen Sondheim's fairytale musical Into The Woods: living happily ever after is a lot tougher than it looks. Of course, it's a lot less gloomy and sour than Sondheim, but, aside from its grown-up perspective, the plot doesn't seem big, bold and primary-coloured enough to fly a kids' movie on. It's an earthbound fairytale.

This is a very basic lapse in a film whose attention to all the other details can't be faulted: the animation of Shrek is even more rippling and sinuous than last time and, even though the human characters look like bendy dolls, the backgrounds they're placed in are usually leaping with life. But the storytelling is lousy. And even characters you like the idea of — Antonio Banderas as a swashbuckling cat — seem a little underdeveloped up on the screen. There's no narrative, just half-hearted episodes punctuated by occasionally brilliant shtick. For example, Donkey tries to cheer up Shrek by singing, 'The Sun'll

Come Out Tomorrow/Bet your bottom .. —Bet my bottom?' says the baffled ogre.

I'll bet my bottom the merchandising revenue is way down.