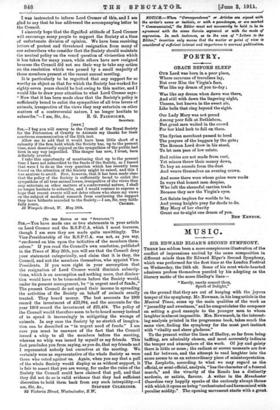 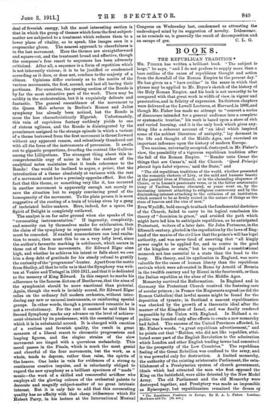 SIR EDWARD ELGAR'S SECOND SYMPHONY. THERE has seldom been a

more conspicuous illustration of the conflict of impressions excited by the same composition in different minds than Sir Edward Elgar's Second Symphony, which was performed for the first time at the London Festival on Wednesday, the 24th ult. Some of his most whole-hearted admirers profess themselves puzzled by his adopting as the literary motto of the score Shelley's lines- " Rarely, rarely comest thou, Spirit of Delight," on the ground that they are out of keeping with the joyous temper of the symphony. Mr. Newman, in his long article in the Musical Times, sums up the main qualities of the work as "jocundity and sweetness," and he congratulates the composer on setting a good example to the younger men to whom laughter is almost impossible. Mrs. Newmarch, in the interest- ing analysis printed in the programme book, takes much the same view, finding the symphony for the most part instinct with "vitality and sheer gladness."

To the present writer the lines of Shelley, so far from being baffling, are admirably chosen, and most accurately indicate the temper and atmosphere of the work. Of joy and gaiety there is little or none ; the radiant or serene moments are few and far between, and the attempt to read laughter into the score seems to us an extraordinary piece of misinterpretation The Larghetto, according to what we may regard as the official, or semi-official, analysis, "has the character of a funeral march," and the vivacity of the Rondo has a distinctly sardonic, or satiric, flavour. A writer in the 111anchestei Guardian very happily speaks of the curiously abrupt theme with which it opens as being "orchestrated and harmonized with peculiar acidity." The opening movement starts with a great

deal of feverish energy, bah the most interesting section is that in which the group of themes which form the first subject- matter are subjected to a treatment which reduces them to a lower plane of vitality, so to speak, like images seen in a crepuscular gloom. The nearest approach to cheerfulness is in the last movement. Here the themes are straightforward and square-cut, and the treatment broad and effective, though the composer's free resort to sequences has been adversely criticized. After all, a sequence is a form of repetition which is not inherently vicious ; it is to be justified or condemned according as it does, or does not, conduce to the majesty of a climax. Opinions differ curiously as to the merits of the various movements, the first, second, and last all having their partisans. For ourselves, the opening section of the Rondo is by far the most attractive part of the work. There may be acidity in the orchestration, but it is exquisitely delicate and fantastic. The general resemblance of the movement to the Queen Mab scherzo in Berlioz's Romeo and Juliet symphony has already been noticed, but the Rondo is

none the less characteristically Elgarish. Unfortunately, this vein of capricious fantasy suddenly yields to one of riotous ugliness, and the Rondo is disintegrated by the prominence assigned to the strange episode in which a variant of a theme bort..owed from the first movement is thrust forward without any apparent reason, and relentlessly thundered out -with all the force of the instruments of percussion. It swells out to gigantic proportions, dwarfing the context like Gulliver among the Lilliputians. The strangest thing about this in- comprehensible orgy of noise is that the author of the analytical notes maintains that it lends coherence to the Rondo ! One would be inclined to argue, a priori, that the introduction of a theme absolutely at variance with the rest of a movement must have a precisely opposite effect. But the fact that this theme, or something very like it, has occurred in another movement is apparently enough not merely to save the situation but to supply convincing proof of the homogeneity of the movement. To the plain person it is more suggestive of the routing of a train of tricksy elves by a gang of inebriated boiler-makers. Here, indeed, for a space, the Spirit of Delight is completely outlawed.

The analyst is on far safer ground when she speaks of the "coruscating instrumentation." If ingenuity, complexity, and sonority can by themselves make for exhilaration, then the claim of the symphony to represent the sheer joy of life must be conceded. If exalted nomenclature can lend exalta- tion to music, then must this be on a very lofty level, since the author's favourite marking is nobilmente, which occurs in three out of the four movements. Sir Edward Elgar aims high, and whether he achieves his intent or falls short we owe him a deep debt of gratitude for his steady refusal to gratify the curiosity of the "programme"-hunter. Apart from the motto from Shelley, all that he tells us is that the Symphony was writ- ten at Venice and Tintagel in 1910-1911, and that it is dedicated to the memory of King Edward. In this respect he marks his adherence to the famous dictum of Beethoven, that the aims of the symphonist should be more emotional than pictorial. Again, though the work is lavishly scored, Sir Edward Elgar relies on the ordinary full modern orchestra, without intro- ducing any new or unusual instruments, or reinforcing special groups. In other words, though a pronounced romantic he is not a revolutionary. For the rest it cannot be said that his Second Symphony marks any advance on the level of achieve- ment obtained by its predecessor, with the essential temper of which it is in substantial accord. It is charged with emotion of a restless and feverish quality, the result in great measure of a liberal resort to chromatic progressions and leaping figures, and the elegiac strains of the slow movement are tinged with a querulous melancholy. This mood passes in the Finale, which is much the most genial and cheerful of the four movements, bat the work, as a whole, tends to depress, rather than raise, the spirits of the hearer. One looks in vain for evidences of a strong or continuous creative impulse, and is reluctantly obliged to regard the new symphony as a brilliant specimen of " made " music—the work of a skilled and resourceful artificer who employs all the glowing colours of the orchestral palette to decorate and magnify subject-matter of no great intrinsic interest. But it is only fair to add that this coruscating quality has no affinity with that cheap iridescence which Sir Hubert Parry, in his lecture at the International Musical

Congress on Wednesday last, condemned as attraating the undeveloped mind by its suggestion of novelty. Iridescence, as he reminds us, is generally the result of decomposition and