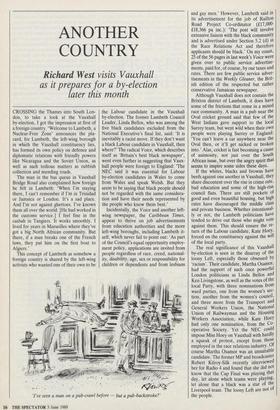 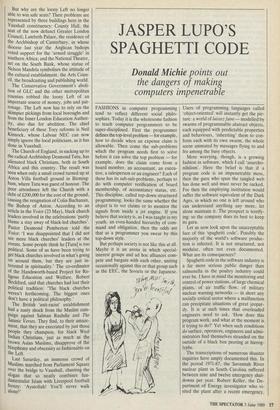 as it prepares for a by-election later this month

CROSSING the Thames into South Lon- don, to take a look at the Vauxhall by-election, I got the impression at first of a foreign country. 'Welcome to Lambeth, a Nuclear-Free Zone' announces the pla- card, for Lambeth, the left-wing borough in which the Vauxhall constituency lies, has formed its own policy on defence and diplomatic relations with friendly powers like Nicaragua and the Soviet Union, as well as such tedious matters as rubbish collection and mending roads.

The man in the bus queue in Vauxhall Bridge Road also complained how foreign he felt in Lambeth: 'When I'm staying there, I can't remember if I'm in Trinidad or Jamaica or London. It's a sad place. And I'm not against ghettoes. I've known them all over the world. [He had worked in the customs service.] I feel fine in the casbah in Tangiers. It works smoothly. I lived for years in Marseilles where they've got a big North African community. But there, if a man breaks one of the French laws, they put him on the first boat to Algiers.'

the Labour candidate in the Vauxhall by-election. The former Lambeth Council Leader, Linda Bellos, who was among the five black candidates excluded from the National Executive's final list, said: 'It is inevitably a racist move. If they don't want a black Labour candidate in Vauxhall, then where?' The radical Voice, which describes itself as 'Britain's best black newspaper', went even further in suggesting that Vaux- hall people were foreign to England: 'The NEC said it was essential for Labour by-election candidates in Wales to come from Wales and speak Welsh. But they seem to be saying that black people should not be regarded with the same considera- tion and have their needs represented by the people who know them best.'

Incidentally, the Voice and another left- wing newspaper, the Caribbean Times, appear to thrive on job advertisements from education authorities and the more left-wing boroughs, including Lambeth it- self, which never fail to point out: 'As part of the Council's equal opportunity employ- ment policy, applications are invited from people regardless of race, creed, national- ity, disability, age, sex or responsibility for children or dependents and from lesbians

'I've seen a man on a pub-crawl before — but a pub-backstroke?'

and gay men.' However, Lambeth said in its advertisement for the job of Railton Road Project Co-ordinator (£17,000- £18,366 pa inc.): 'The post will involve extensive liaison with the black community and is advertised under Section 5.2 (d) in the Race Relations Act and therefore applicants should be black.' On my count, 25 of the 56 pages in last week's Voice were given over to public service advertise- ments, paid for, of course, by our taxes and rates. There are few public service adver- tisements in the Weekly Gleaner, the Brit- ish edition of the respected but rather conservative Jamaican newspaper.

Although Vauxhall does not contain the Brixton district of Lambeth, it does have some of the frictions that come in a mixed race community. A man in a pub near the Oval cricket ground said that few of the West Indians gave support to the local Surrey team, but went wild when their own people were playing Surrey or England: 'You can't leave a car anywhere near the Oval then, or it'll get nicked or broken into.' Alas, cricket is fast becoming a cause of animosity, not just over the South African issue, but over the angry spirit that seems to inspire some sides these days.

If the whites, blacks and browns have beefs against one another in Vauxhall, they share discontent over the rise in crime rate, bad education and some of the high-rise council flats. There are still pockets of good and even beautiful housing, but high rates have discouraged the middle class and private business. Whether intentional- ly or not, the Lambeth politicians have tended to drive out those who might vote against them. This should ensure the re- turn of the Labour candidate, Kate Hoey, forced on the constituency against the Will of the local party. The real significance of this Vauxhall by-election is seen in the disarray of the loony Left, especially those obsessed by 'racism'. Their candidate, Martha Osamor, had the support of such once powerful London politicians as Linda Bellos and Ken Livingstone, as well as the votes of the local Party, with three nominations from ward parties, one from the women's sec- tion, another from the women's council, and three more from the Transport and General Workers Union, the National Union of Railwayman and the Housing Workers Association, while Kate Hoey had only one nomination, from the Co- operative Society. Yet the NEC could impose Miss Hoey on Vauxhall with hardly a squeak of protest, except from those employed in the race relations industry. Of course Martha Osamor was an unsuitable candidate. The former MP and broadcaster Robert Kilroy-Silk recently iriterviewed her for Radio 4 and found that she did not know that the Cup Final was playing that day, let alone which teams were playing, let alone that a black was a star of the Liverpool team. The loony Left are not of the people.

But why are the loony Left no longer able to win safe seats? Their problems are represented by three buildings here in the Vauxhall constituency: County Hall, the seat of the now defunct Greater London Council; Lambeth Palace, the residence of the Archbishop of Canterbury, in whose diocese last year the Anglican bishops voted support for the 'armed struggle' in southern Africa; and the National Theatre, set on the South Bank, whose statue of Nelson Mandela symbolises the attitude of the cultural establishment, the Arts Coun- cil, the broadcasting and publishing world.

The Conservative Government's aboli- tion of GLC and the other metropolitan counties robbed the loony Left of an important source of money, jobs and pat- ronage. The Left now has to rely on the skimpier pickings from local boroughs and from the Inner London Education Author- ity, also due for abolition. The chief beneficiary of these Tory reforms is Neil Kinnock, whose Labour NEC can now simply ignore the local politicians, as it has done in Vauxhall.

The Church of England, in sucking up to the radical Archbishop Desmond Tutu, has alienated black Christians, both in South Africa and this country. The result was seen when only a small crowd turned up at Aston Villa football ground in Birming- ham, where Tutu was guest of honour. The poor attendance left the Church with a debt of £200,000 for the cost of the ground, causing the resignation of Colin Buchanan, the Bishop of Aston. According to an article in the Voice (23 May), black church leaders involved in the celebrations 'partly blame a stay away of black-led churches'. Pastor Desmond Pemberton told the Voice: 'I was disappointed that I did not see more black churches' leaders at the events. Some people think he [Tutu] is too political. Some of us have been trying to get black churches involved in what's going on around them, but they are just in- terested in spirituality.' The co-ordinator of the Handsworth-based Project for Re- ligous Education and Welfare, Robert Beckford, said that churches had lost their Political tradition: 'The black churches weren't forthcoming. The biggest ones don't have a political philosophy.'

The British 'anti-racist' establishment had a nasty shock from the Muslim cam- paign against Salman Rushdie and The Satanic Verses. They find, to their amaze- ment, that they are execrated by just those people they champion, for black West Indian Christians, just as much as the brown Asian Muslims, disapprove of the blasphemy and obscenity so fashionable on the Left.