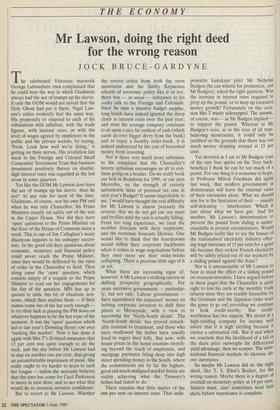 Mr Lawson, doing the right deed for the wrong reason

The celebrated Victorian maverick George Labouchere once complained that he could bear the way in which Gladstone always had the ace of trumps up his sleeve, if only the GOM would not reveal that the Holy Ghost had put it there. Nigel Law- son's critics evidently feel the same way. His propensity to respond to each of his tribulations with inflation, with the trade figures, with interest rates, or with the level of wages agreed by employers in the public and the private sectors, by saying, 'Pooh. Look how well we're doing,' is getting on their nerves. His revelation last week to the Foreign and Colonial Small Companies' Investment Trust that business investment positively thrives on double- digit interest rates was regarded as the last straw in some quarters.

Yet like the GOM Mr Lawson does have the ace of trumps up his sleeve, does he not? At any rate for most of the time. Gladstone, of course, was his own PM and when he was only Chancellor, his Prime Ministers usually sat safely out of the way in the Upper House. Nor did they have 'open' questions to the Prime Minister on the floor of the House of Commons twice a week. This is one of Jim Callaghan's many disastrous legacies to his unhappy succes- sors. In the good old days questions about economic, monetary and financial policy could never reach the Prime Minister, since they would be deflected by the rules of order to the Chancellor to field. Then along came the `open' question, which consists simply of a request to the Prime Minister to read out her engagements for the day of the question. MPs line up in queues to table this bit of ritualistic non- sense, which then enables them — if their names come out of the hat early enough to try their luck at pinning the PM down on whatever happens to be the hot topic of the moment. It was the `open' question which led to last year's Downing Street row over `bucking the market'. Now it has done it again with Mrs T's ill-timed assurance that 13 per cent was quite enough to do the trick, just the day before Mr Lawson had to slap on another one per cent, thus giving an uncomfortable impression of panic. She really ought to try harder to learn to curb her tongue — unless she seriously believes that the time has come for Cecil Parkinson to move in next door, and to see what that would do to overseas investor confidence.

But to revert to Mr Lawson. Whether the restive critics from both the stern monetarist and the flabby Keynesian schools of economic policy like it or not, there was — as usual — substance to his cocky talk to the Foreign and Colonials. Since he runs a massive budget surplus, long bonds have indeed ignored the steep climb in interest rates over the past year; and since the average company continues to sit upon a nice fat cushion of cash (which earns an ever bigger divvy from the bank) and to enjoy a healthy order-book, it is indeed undeterred by the cost of borrowed money from investing.

Nor is there very much more substance to the complaint that the Chancellor's breezy optimism encourages us all to con- tinue going on a bender. Do we really book our hols in Benidorm for 1990, or our next Mercedes, on the strength of entirely unbankable hints of personal tax cuts in next year's Budget? It seems improbable to me. I would have thought the real difficulty for Mr Lawson is almost precisely the reverse; that we do not get out our macs and brollies until the rain is actually falling. From too long experience, we treat the weather forecasts with deep scepticism, and the economic forecasts likewise. One would like to think that the boardrooms would stiffen their corporate backbones when it comes to wage negotiations before they once more see their order-books collapsing. There is precious little sign of it as yet.

What there are increasing signs of, however, is Mr Lawson's striking success in shifting prosperity geographically. For years successive governments — particular- ly, but not only, Labour governments have squandered the taxpayers' money on bribing corporate investors to shift their plants to Merseyside, with a view to narrowing the `North-South divide'. The `North-South divide' has proved remark- ably resistant to treatment, and those who have swallowed the bribes have usually lived to regret their folly. But now, with house prices in the home counties stretch- ing beyond the reach of employees, and mortgage payments biting deep into high street spending money in the South, where the commitments are by far the highest, good old much-maligned market forces are visibly achieving what the Treasury's bribes had failed to do.

There remains that little matter of the one per cent on interest rates. That indis- pensable kamikaze pilot Mr Nicholas Budgen (he can whistle for promotion, can Mr Budgen), asked the right question. Was the increase in interest rates required to prop up the pound, or to mop up excessive money growth? Fortunately on this occa- sion Mrs T wisely sidestepped. The answer, of course, was — as Mr Budgen implied to support the pound. Whereas in Mr Budgen's eyes, as in the eyes of all true- believing monetarists, it could only be justified on the grounds that there was too much money slopping around at 13 per cent.

Yet devoted as I am to Mr Budgen (one of the rare free spirits on the Tory back- benches) I think he can be too much of a purist. For one thing it is nonsense to hope, as Professor Milton Friedman did again last week, that modern governments in democracies will leave the external value of their currencies alone. What we should aim for is the limitation of their — usually self-defeating — interference. Which is just about what we have got. And for another, Mr Lawson's determination to prevent the pound from sliding is under- standable in present circumstances. Would Mr Budgen really like to see the bosses of the nationalised electricity industry offer- ing wage increases of 15 per cent for a quiet life because they reckon French electricity will be safely priced out of our markets by a sliding pound against the franc?

Nor is it unreasonable of Mr Lawson to bear in mind the effect of a sliding pound on overseas investors. I have argued before in these pages that the Chancellor is quite right to toss his curls at the monthly trade returns since they are readily financible by the Germans and the Japanese (who want the game to go on) providing we continue to look credit-worthy. But credit- worthiness has two aspects. We invest in a high-yielding company for income well aware that it is high yielding because it carries a substantial risk. But if and when we conclude that the likelihood of a fall In the share price outweighs the differential yield advantage, then we scarper. The inter- national financial markets do likewise ab- out currencies.

So maybe Mr Lawson did do the right deed, like T. S. Eliot's Becket, for the wrong reason. Maybe there is a degree of overkill on monetary policy at 14 per cent. Sinners must, alas! sometimes wear hair shirts before repentance is complete.