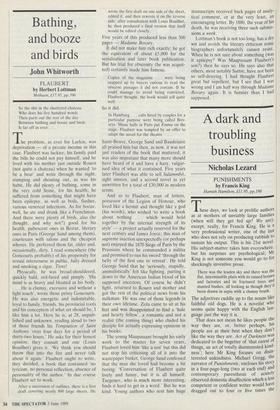 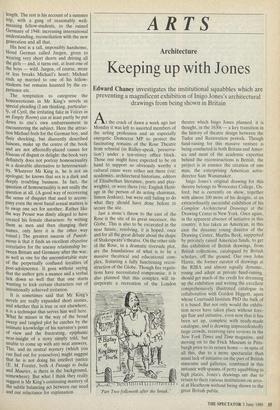 A dark and troubling business

These days, we look at prolific authors as at mothers of unviably large families (when will they get fed up? We are); except, really, for Francis King. He is a very professional writer, one of the last who does not rely on producing rubbish to sustain his output. This is his 21st novel. His subject-matter takes him everywhere, but his surprises are psychological; Mr King is not someone you would go to for shockingly inventive prose.

There was the leaden sky and there was the flat, interminable plain with its ruined houses and factories and its fractured trees and stunted bushes, all looking as though they'd been drawn in sepia with a clumsy brush.

The adjectives cuddle up to the nouns like faithful old dogs. He is a novelist who seems quite happy with the English lan- guage just the way it is.

That does not mean he likes people the way they are, or, better perhaps, his people are at their best when they don t like the way they are. Act of Darkness was dedicated to the begetter of 'that rarest of things, an act of totally disinterested kind- ness'; here Mr King focuses on disin- terested unkindness. Michael Gregg, the narrator of Punishments, encloses his story in a four-page-long (two at each end) and contemporary parenthesis of acutely observed domestic disaffection which a less competent or confident writer would have dragged out to four or five times the length. The rest is his account of a summer trip, with a gang of reasonably well- meaning fellow-students, to the ruined Germany of 1948: increasing international understanding, reconciliation with the new generation and all that.

His host is a tall, impossibly handsome, blond German called Jurgen, given to wearing very short shorts and driving all the girls — and, it turns out, at least one of the boys — wild. Jurgen, of course, more or less breaks Michael's heart; Michael ends up married to one of his fellow- students but remains haunted by the ex- perience etc.

The temptation to categorise the homoeroticism in Mr King's novels as special pleading (I am thinking, particular- ly, of Cyril, the irritating fake in Voices in an Empty Room) can at least partly be put down to one's own embarrassment in encountering the subject. Here the attrac- tion Michael feels for the German boy, and their shocking, but discreetly described liaisons, make up the centre of the book and are not affectedly-placed causes for frtssons of disgust or delight: the book very definitely does not portray homosexuality as a desirable alternative to heterosexual- ity. Whatever Mr King is, he is not an apologist: he knows that sex is a dark and deeply troubling business. In fact, the question of homosexuality is not really the question at all. (A good way of recovering the sense of disquiet that used to accom- pany even the most banal sexual matters is to swap one sex for another. Rather like the way Proust was dimly alleged to have created his female characters: by writing them as men and then changing their names, only here it is the other way round.) The greatest success of Punish- ments is that it finds an excellent objective correlative for the uneasy relationship be- tween Britain and Germany after the war, as well as one for the uncomfortable state of the perpetually confused loyalties of post-adolescence. It goes without saying that the author gets a nuance and a verbal tick down so well that that one starts wanting to kick certain characters out of intentionally achieved irritation. It is sometimes said that Mr King's novels are really expanded short stories, and whether that is true or not elsewhere, it is a technique that serves him well here. What he misses in the way of the broad sweep and tangled plot he catches by the intimate knowledge of his narrator's point of view and the frustrating, epiphanic near-insight of a story simply told, but unable to come up with any neat answers. This, and its central mystery (which you can find out for yourselves) might suggest that he is not doing his intellect justice (E. M. Forster, both A Passage to India and Maurice, is there in the background, 'somewhere). But what I think they really suggest is Mr King's continuing mastery of the subtle balancing act between our need and our reluctance for explanation.