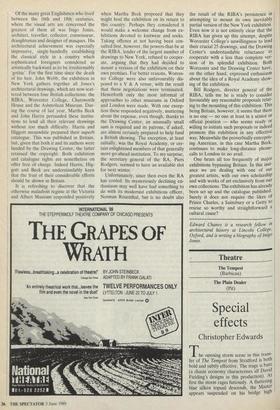 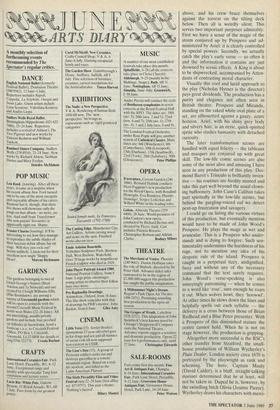 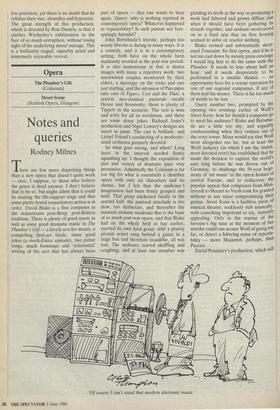 The opening storm scene in this trans- fer of The Tempest from Stratford is both bold and subtly effective. The stage is bare (a chaste economy characterises all David Fielding's designs in this production). At first the storm rages furiously. A fluttering blue silken topsail descends, the Master appears suspended on his bridge high

above, and his crew brace themselves against the torrent on the tilting deck below. Then all is weirdly silent. This serves two important purposes admirably. First we have a sense of the magic of the storm conjured up by Prospero and ad- ministered by Ariel: it is clearly controlled by special powers. Secondly, we actually catch the play's early verse — so often it and the information it contains are just drowned by scenic effects. A King is about to be shipwrecked, accompanied by Atten- dants of contrasting moral character.

Visually this cool and lucid approach to the play (Nicholas Hytner is the director) pays great dividends. The production has a purity and elegance not often seen in British theatre. Prospero and Miranda, standing on the raked white oval plate of a set, are silhouetted against a gauzy, azure horizon. Ariel, with his shiny grey body and silvery hair, is an eerie, quick-spirited sprite who studies humanity with detached curiosity.

The later transformation scenes are handled with equal felicity — the tableaux and masques are conjured up with great skill. The low-life comic scenes are also some of the most alive and amusing I have seen in any production of this play. Des- mond Barrit's Trinculo is brilliantly inven- tive — his routines are freshly minted and take this part well beyond the usual clown- ing buffoonery. John Cane's Caliban takes part spiritedly in the low-life scenes, but behind the gurgling-voiced oaf we detect pent-up frustration and savagery.

I could go on listing the various virtues of this production, but eventually mention would have to be made of John Wood's Prospero. He plays the mage as wet and avuncular. This is a Prospero who under- stands and is dying to forgive. Such sen- timentality undermines the harshness of his rage, not to mention any idea of his despotic rule of the island. Prospero is caught in a perpetual tizzy, undignified, fussy and without any of the necessary command that the text surely requires. John Wood's verse-speaking is also annoyingly patronising — when he comes to a word like 'roar', sure enough he roars it out. When wolves howl, they 'hoowwl'. At other times he slows down the lines and helpfully spells out each syllable — the delivery is a cross between those of Brian Redhead and a Blue Peter presenter. With a Prospero of this diminished stature the centre cannot hold. When he is not on stage however, the production is gripping.

Altogether more successful is the RSC's other transfer from Stratford, the small- house production of William Wycherley's Plain Dealer. London society circa 1670 is portrayed by the playwright as rank and scheming. The hero, Captain Mauly (David Calder), is a bluff, straight-talking mariner determined that he at least, will not he taken in. Duped he is, however, by the swindling bitch Olivia (Joanne Pierce). Wycherley draws his characters with merci- less precision, yet there is no doubt that he relishes their vice, absurdity and hypocrisy. The great strength of this production, which is directed by Ron Daniels, is that it catches Wycherley's exhilaration in the face of so much corruption, without losing sight of his underlying moral outrage. This is a brilliantly staged, superbly acted and immensely enjoyable revival.