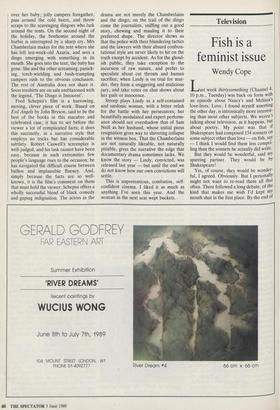 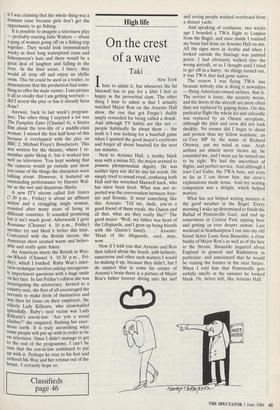 Fish is a feminist issue

Last week thirtysomething (Channel 4, 10 p.m., Tuesday) was back on form with an episode about Nancy's and Melissa's love-lives. Love, I found myself asserting the other day, is intrinsically more interest- ing than most other subjects. We weren't talking about television, as it happens, but about poetry. My point was that if Shakespeare had composed 154 sonnets on some subject other than love — on fish, say — I think I would find them less compel- ling than the sonnets he actually did write.

Yes, of course, they would be wonder- ful, I agreed. Obviously. But I personally might not want to re-read them all that often. There followed a long debate, of the kind that makes me wish I'd kept my mouth shut in the first place. By the end of

it I was claiming that the whole thing was a feminist issue because girls don't get the opportunity to go fishing.

It is possible to imagine a television play — probably starring Julie Walters — about a gang of women going off on a fishing trip together. They would look tremendously wacky in their long waterproof coats and fisherperson's hats and there would be a great deal of laughter and falling in the river. In the final scene, I fancy, they would all strip off and enjoy an idyllic swim. This bit could be used as a trailer, to demonstrate that the production had some- thing to offer the male viewer. I can picture it all so vividly that I am getting worried did I invent the play or has it already been done?

Anyway, back to last week's program- mes. The other thing I enjoyed a lot was The Pumpkin Eater (Channel 4), a Sixties film about the love-life of a middle-class woman. I missed the first half hour of this because it overlapped with the play on BBC 2, Michael Frayn's Benefactors. This was written for the theatre, where I re- member quite liking it, but it worked less well on television. You kept wishing that the cameras would go outside and show you some of the things the characters were talking about. However, it featured an outstanding performance by Harriet Wal- ter as the wet and disastrous Sheila.

A new ITV sitcom called Sob Sisters (7.30 p.m., Friday) is about an affluent widow and a struggling single woman, reunited after many years of living in different countries. It sounded promising but it isn't much good. Afterwards I gave Roseanne (Channel 4, 10 p.m., Friday) another try and liked it better this time. Contrasted with the British sitcom, the American show seemed warm and believ- able and really quite funny. An American meets the British in Wax- on-Wheels (Channel 4, 10.30 p.m., Fri- day), which I loathed. Ruby Wax's inter- view technique involves asking outrageous- ly impertinent questions with a huge smile On her face. In last Friday's edition she was investigating the aristocracy. Invited to a Country seat, she first of all encouraged the servants to make fools of themselves and was then let loose on their employer, the elderly Lady Killearn, who stonewalled splendidly. Ruby's next victim was Lady Killearn's son-in-law. 'Are you a social climber?' she enquired, flashing her enor- mous teeth. It is truly astonishing what some people will put up with in order to be on television. Since I didn't manage to get to the end of the programme, I can't be sure that the son-in-law continued to put up with it. Perhaps he rose to his feet and ordered Ms Wax and her retinue out of the house. I certainly hope so.