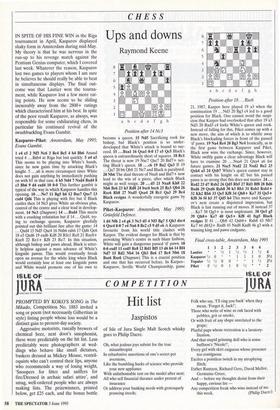 IN SPITE OF HIS FINE WIN in the Riga tournament in April, Kasparov displayed shaky form in Amsterdam during mid-May. My theory is that he was nervous in the run-up to his revenge match against the Pentium Genius computer, which I covered last week. Whatever the reason, Kasparov lost two games to players whom I am sure he believes he should really be able to beat in simultaneous displays. The final out- come was that Lautier won the tourna- ment, while Kasparov lost a few more rat- ing points. He now seems to be sliding inexorably away from the 2800+ ratings which characterised him at his best. In spite of the poor result Kasparov, as always, was responsible for some exhilarating chess, in particular his continued revival of the swashbuckling Evans Gambit.