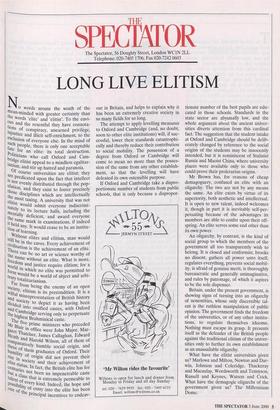 the words 'elite' and 'elitist'. To the envi- ous and the resentful they have connota- tions of conspiracy, unearned privilege,

Injustice and illicit self-enrichment, to the exclusion of everyone else. In the mind of such people, there is only one acceptable fate for an elite: its total destruction. Politicians who call Oxford and Cam- bridge elitist appeal to a mindless egalitar- ianism, and stir up hatred and paranoia. Of course universities are elitist; they are predicated upon the fact that intellect

Is not evenly distributed through the pop- ulation, and they exist to foster precisely those disciplines which are intellectually

the most taxing. A university that was not elitist would admit everyone indiscrimi

nately to its lecture halls, including the Mentally deficient, and award everyone the same mark in examinations, if indeed It held any. It would cease to be an institu- tion of learning. Without elites and elitism, man would still be in the caves. Every achievement of

civilisation is the achievement of an elite. There can be no art or science worthy of the name without an elite. What is more, freedom and justice require elitism; for a World in which no elite was permitted to ,.enn Would be a world of abject and arbi- trary totalitarianism.

Par from being the enemy of an open

wety, elitism is its precondition. It is a Wf iul misrepresentation of British history and society to depict it as having been divided into ossified castes, with Oxford theCambridge serving only to perpetuate 'tie_ highest Brahminical caste. . Jhe five prime ministers who preceded Mr Blair in office were John Major, Mar- garet Thatcher, James Callaghan, Edward Heath and Harold Wilson, all of them of rhInparatively humble social origin, and hure pf them graduates of Oxford. Their ritinlity of origin did not prevent their elite t society and their achievement of ,..i[te status. In fact, the British elite has for cbull2turies not been an impenetrable caste ta,1 a class that is extremely permeable to poisen.t CI! every

onesibility kind. Indeed, the hope and , of entry into the elite has been

of the principal incentives to endeav- our in Britain, and helps to explain why it has been an extremely creative society in so many fields for so long.

The attempt to apply levelling measures to Oxford and Cambridge (and, no doubt, soon to other elite institutions) will, if suc- cessful, lower their standards catastrophi- cally and thereby reduce their contribution to social mobility. The possession of a degree from Oxford or Cambridge will come to mean no more than the posses- sion of the same from any other establish- ment, so that the levelling will have defeated its own ostensible purpose.

If Oxford and Cambridge take a dispro- portionate number of students from public schools, that is only because a dispropor-

tionate number of the best pupils are edu- cated in those schools. Standards in the state sector are abysmally low, and the whole argument about the ancient univer- sities diverts attention from this cardinal fact. The suggestion that the student intake at Oxford and Cambridge should be delib- erately changed by reference to the social origins of the students may be innocently intended, but it is reminiscent of Stalinist Russia and Maoist China, where university places were available only to those who could prove their proletarian origins.

Mr Brown has, for reasons of cheap demagoguery, confused an elite with an oligarchy. The two are not by any means the same. An elite exists by virtue of its superiority, both aesthetic and intellectual. It is open to new talent, indeed welcomes it, though in part it is inevitably self-per- petuating because of the advantages its members are able to confer upon their off- spring. An elite serves some end other than its own power.

An oligarchy, by contrast, is the kind of social group to which the members of the government all too transparently wish to belong. It is closed and conformist, brooks no dissent, gathers all power unto itself, regulates everything, prevents social mobil- ity, is afraid of genuine merit, is thoroughly bureaucratic and generally unimaginative, and rules by patronage, of which it aspires to be the sole dispenser.

Britain, under the present government, is showing signs of turning into an oligarchy of nonentities, whose only discernible tal- ent is the ruthless manipulation of public opinion. The government finds the freedom of the universities, or of any other institu- tions, to regulate themselves irksome. Nothing must escape its grasp. It presents itself as the defender of the British people against the traditional elitism of the univer- sities only to further its own establishment as an unassailable oligarchy.

What have the elitist universities given us? Marlowe and Milton, Newton and Dar- win, Johnson and Coleridge, Thackeray and Macaulay, Wordsworth and Tennyson, Russell and Keynes, Watson and Crick. What have the demagogic oligarchs of the government given us? The Millennium Dome.