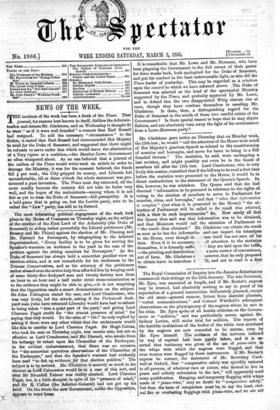 Mr. Gladstone gave notice on Thursday that on Monday week,

the 12th inst., he would "call the attention of the House to so much of Her Majesty's gracious Speech as related to the constituencies of counties and boroughs, and move for leave to bring in a Bill founded thereon." The statistics, he said, were undergoing a last revision, and might possibly not even be in the hands of members till after the 12th inst. Lord Cranbourne, who is very lively this session, remarked that if the bill was to be read a first time before the statistics were presented to the House, it would be in direct contradiction to the statement of the Queen's Speech. In. this, however, he was mistaken. The Queen said that she had directed "information to be procured in reference to the rights ot voting in the election of members to serve in Parliament for counties, cities, and boroughs," and that "when that information is complete" (not when it is presented to the House) "the at- tention of Parliament will be called to the result thus attained; with a view to such improvements" &a. Now surely all that the Queen thus said was that information was to be obtained., and that Ministers would call the attention of Parliament to "the result thus obtained." Mr. Gladstone can obtain the result as soon as he has the informatics and can impart his intentions

to the House, even though th also itself has not seen all his data. Even if it be necessary 11 attention to the statistics themselves, it is formally suffic they are laid upon the table, —the printing and distribution a mere matter of convenience,

not of form. Mr. Gladstone k iowever, that he only proposed

to obtain leave to introduce t lll, and not to read it a first time.