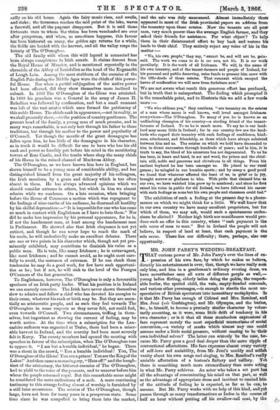 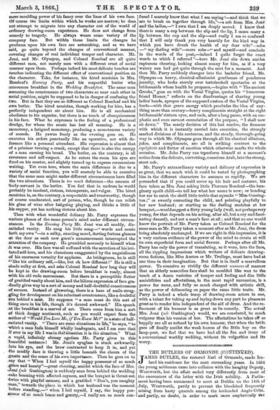 'THAT curious power of Mr. John Parry's over the lines of ex- pression of -his own face, by which he makes us believe* directly his entertainment is over, that, thottgh we have really Seen only him, -and him in a gentleman's ordinary evening dress, we have nevettheless seen all sorts of different people as 1014— -young ladies flirting, elderly ladies doing the 'polite,' the 'respedt- able butler, the spoiled child, the vain, empty-headed coxcomb, and various other personages,—is enough to startle the most urr- speculative of British spectators hito'inomentary metaphysics. Is it that Mr. Parry has enough of Colonel and Mrs. Roseleaf, and Mrs. Jend (née Gushington), and Mr. Olympus, and the butler, in himself, to become a precisely similar character by volun- tarily accenting, as it were, some little drift of tendency in his biV11 character ; or is it that all these litlinberless expressions of face represent merely the most superficial mannerisms of social convention,—a variety of masks which almost any one could assume under a little social pressure, without ceasing to be their own individual selves? The latter pan scarcely be the case, be- cause Mr. Parry goes a good deal deeper than the mere ripple of conventional affectations. His face mtpresses almost every variety of self-love and amiability, from Mr. jene's muddy and selfish vanity about his own songs and singing, to Mrs. Roseleaf's really amiable affectation of a hostess's flattery and raillery. Yet there is something much more extraordinary than mere acting in what Mr. Perry achieves. An actor who takes a set part has all the advantage of coneentrating his mind on that part, as well as the advantage of appropriate dress and incident to remind him of the attitude of feeling he is expected, as far as he can, to assume. But Mr. Parry works with no help of this kind, and yet passes through as many transformations as Indus in the course of half an hour without putting off his swallow-tail coat, by the mere moulding power of his fancy over the lines of his own face. Of course the limits within which he works are narrow; he does not attempt to migrate into any &erecter out of the world of ordinary drawing-room experience. He does not change from comedy to tragedy. He always wears some variety of the company face. But within these limits the changes he produces upon his own face are astonishing, and as we have said, go quite beyond the changes of conventional manner, covering changes of real individual temper and character. Mr. Jene, and Mr. Olympus, and Colonel Roseleaf are all quite ,different men, not merely men with a different crust of social manner upon them. Perhaps indeed his most delicate touches are .touches indicating the different effect of conventional position on the character. Take, for instance, his hired musician in Mrs. Itoseleafs Evening Party, and his respectful butler who. -announces breakfast in the Wedding Breakfast. The same man asstuning the countenance of two characters so near each other in social position, might be supposed to be in danger of confusing the two. But in fact they are as different as Colonel Roseleaf and his own butler. The hired musician, though working for hire, has a perfectly independent air about him. He is all mechanical obedience to his superior, but there is no touch of obsequiousness in his face. What he expresses is the feeling of a professional drudge, for whom the music has lost all meaning. He is a monotony, a fatigued monotony, producing a monotonous variety -of sounds. He yawns freely as the evening goes on. He ..executes his orders punctually like an operative, not with de- ference like a personal attendant. His expression is almost that of a prisimer turning a crank, except that there is also the energy .of a man earning his bread. The butler, on the contrary, is all reverence and self-reaped. As he enters the room his eyes are fixed on his master, and slightly turned up to express ceremonious waiting. Yet even here, where the main difference is due to a *ariety of social function, you will scarcely be able to conceive that the same man might under-different circumstances have filled the two situations. There is too much deference—the essence of 'body-servant in the butler. You feel that in undress he would probably be insolent, riotous, intemperate, and vulgar. The hired -musician is, on the contrary, a respectable and trustworthy, though of coarse uneducated, sort of person, -who, though he can relish his glass of wine after fatiguing playing, and thinks a little of -his supper, yet has nothing riotous about him.

Then with what wonderful delicacy Mr. Parry expresses the -various phases of the same person's mind under different circum- stances. In the Evening Party Mr. Jena was all muddy, dis- -satisfied vanity. He sang his little song—" words and music both my own "—in a sulky, exacting mood, darting furious glances at the door as each new guest's announcement interrupted the attention of the company. He grumbled morosely to himself when it was over. His face was all suffused with the secretion of his irri- -fated self-love, and his clumsiness exaggerated by the ungainliness .of his enormous voracity for applause. As bridegroom, he- is still 4i like his ordinary self,—like, but oh how different!" He is still a -shade talky at first, and asks Colonel Roseleaf how long they will . be kept in the drawing-room before breakfast is ready, almost , aria his old rude moroseness. But.there is a perceptible flutter , of gratified vanity about him, and the bilious expression of face gm, .duallygivee way to a sort of moony and half-doubtful consciousness1 of success. Instead of glowering, there is a haze of smile strug- gling for development on his reluctant countenance, like a doubtful ; sun behind a mist. He supposes "a man must do this sort of thing once in his lift, though it's dewed awkward." Ms speech ; at the breakfast is a marvel of art. There oozes from him a sort; of thick dreggy sentiment, such as you would expect from the author of " Tfoukl.FOu Love Me, if rou:rum Me 7" in a state of half- -satiated vanity. "There are Bonin situations in life," he says, "to 1 -Which a man feels himself wholly inaaequate, and I am sure that if ever in my life I was in ad/situation it is this situation." What -a vapid, infinitely ahuney egotism Mr. Parry gives to this !beautiful sentence! Mr. Jend!s eyeglass is stuck awkwardly, into his eye, and the brow contracted to keep it in, and yet the muddy lace is thawing a little beneath the cheers of the _guests and the sense of his own importance. Then he goes on to -say that -" When I feel myself the happy possessor of so much _grace and beauty"—great cheering, amidst which the face of Mrs. alend ,(nee Gushington) is suddenly seen from behind the wedding oake beaming with affected coyness, and the bouquet is thrust out 4wice with playful menage, and a gratified "Don't, you naughty man," towards the place in which her husband was the moment before staading,—" when I feel myself, I say, the happy pos- *visor of so much brace and geauty,—I really am so much con- fused I scarcely know that what I am saying !—and think that we

are to brash on together through life,"--a sob from Mrs. Jenii and the ladies,—" I own that I am deeply moved. I know that there is many a cup between the slip and the lip, / mean many a lip between the cup and the slip—and really I am so confused that I will only thank you very heartily for the kind way in which you have drunk the health of my dear wife"—sobs —" my darling wife—more sobs—" and myself—and conclude in the words of the poet,—indeed I quite forget the exact words to which I referred "—here Mr. Jen6 sits down amidst rapturous cheering, looking almost sunny for him, as if a very watery sun had got quite through the mist for a moment. And then Mr. Parry suddenly changes into the bachelor friend, Mr. Olympus—a heavy, classical-allusionist gentleman of ponderous jocosity, who looks sternly over tortoiseshell spectacles at the bridesmaids whose health he proposes,—begins with "The ancient Greeks," goes on with the Vestal Virgins, quotes his humorous friend Homer," reflects on the disadvantage of shaving young ladies' heads, apropos of the supposed custom of the Vestal Virgins,

• hurls—with that grave energy which precludes the idea of any- thing more than oratory—heavy compliments straight at the eight bridesmaids' sixteen eyes, and ends, after a long pause, with an em- phatic and even earnest enunciation of the purpose, "I shall now sit down." The manly decision of this last resolve, the firmness with which it is instantly carried into execution, the strongly marked divisions of his sentences, and the steady, thorough-going way in which Mr. Olympus goes through all his classical allusions, jokes, and compliments, are all in striking contrast to the espieglerie and flutter of emotion which otherwise marks the whole occasion. Mr. John Parry can tninsform himself at a moment's notice from the delicate, curvetting, conscious Arab, into the strong, stout cob.

Mr. Parry's extraordinary variety and delicacy of expression is so great, that we much wish it could be tested by photographing him in the different characters he assumes so rapidly. We are persuaded that if you could cover up his hair and costume, his face taken as Mrs. Send asking little Florence Roseleaf—the ima- ginary spoilt child—to tell her what her name is now; or bending her ear to catch the shrill little treble that squeaks "Miss Gussing- ton ;" or sweetly correcting the child, and pointing playfully to her new husband; or starting as the darling snatches at her bouquet,—wouldsuggest a flirty young lady (well, not perhapsvery young, for that depends on his acting, after all, but a coy and fasci- nating damsel), and not a man's face at all ; and that no one would know the portrait of Mr. Parry taken as Colonel Roseleaf for the same man as Mr. Parry taken a moment after as Mr. Jene, the draft being absolutely unchanged. If we are right in this impression, it is a very curious evidence of the power of the mind to create at will its own superficial form and social flavour. Perhaps after all Mr. Parry has only the power of translating, as it were, into the face, all the rippling impressions which writers of delicate drawing- room fictions, like Miss Austen or Mr. Trollope, must have had at one time in their imagination. But that is in itself a marvellous power. To conceive so vividly the different nuances of manner that an elderly masculine face shall be moulded like wax to the touch of a dozen varieties of temper and feeling and dim little amiabilities and affectations, in the most rapid succession, is a power far rarer, and fatly as much charged 'with artistic skill, as the power of delineating on paper the same little traits. Mr. Parry is indeed a whole troop of drawing-room actors M. one, with a talent for taking up and laying down any part he pleases so -great as to render him independent of the aid of dress. And the re- finement of his humour is as great as its comedy. The actual "Mrs. Jena (née Gushington) would, we are tenvitre.,eft, be Much vulgarer than his version of her. The affectations be takes off so happily are all so refined by his own humour, that when the bride goes off finally amidst the weak huzzas of the little boy on the lamp-post, we feel that we have had all the tan and irony of a conventional worldly wedding, without nu'vulgarities and its