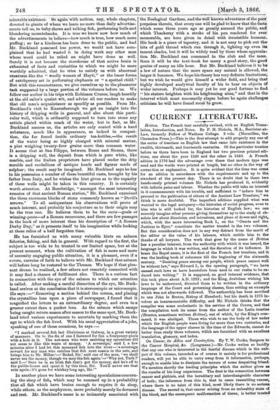 Britton. The French text carefully revised, with an English Trans- lation, Introduction, and Notes. By F. M. Nichols, M.A., Barrister-at- Law, formerly Fellow of VVadham College. 2 vols. (Macmillan, the Clarendon Press.)—This is the first attempt to edit properly any one of the series of treatises on English law that came into existence in tha twelfth, thirteenth, and fourteenth centuries. Of the particular treatise before us there have been in England but two previous printed edi- tions, one about the year 1530 and the other in 1640. A French edition in 1776 had the advantage over these that modern type was used and the words were printed at length, but no other in the way of correc tion or explanation. It is quite evident that the time was come for an edition in accordance with the requirements and up to the, standard of the present day. There is no doubt that in these twe handsomely printed volumes Mr. Nichols has produced it, evidently with infinite pains and labour. Whether tho public will take an interest in it commensurate with his trouble, and sufficient to "induce him to proceed to the publication of others of the Ancient Law Treatises," we think is more doubtful. The imperfect editions supplied what was wanted to the legal antiquary—the historian of social progress, even to him who is still looked for, the historian of English law; we can- scarcely imagine other persons giving themselves up to the study of ob- solete law about disseisins, and intrusions, and pleas of dower and right, which, with the more interesting Book I., on the "Courts and the Justices in Eyre," constitute the matter treated in the two volumes. But this consideration does not in any way detract from the merit of the editor or the value of his labours, which entitle him to the- thanks of all lawyers. The work that goes by the name of Britton- has a peculiar interest, from the authority with which it was issued, the language in which it was written, and the duration of its influence. It bears the Royal name, it is the first of the French law treatises, and it was the leading book of reference till the beginning of the sixteenth oentury. "Desiring peace among our people, which peace cannot well be without law," says Edward I., in the opening paragraph, "we have caused such laws as have heretofore been used in our realm to be re- duced into writing." It is supposed, on good internal evidence, that this took place about A.D. 1292; and the King, doubtless wishing his laws to be understood, directed them to be written in the ordinary language of the Court and governing classes, thus setting an example which was not afterwards followed. The authorship has been ascribed to one John le Breton, Bishop of Hereford; but his death in 1275 in- volves an insurmountable difficulty, and Mr. Nichols thinks that the compiler was some ecclesiastic in the service of the Crown, and that the compilation took its name from the author of the Latin treatise (Bracton, sometimes written Britton), out of which, by the King's com- mand, it was abridged. Those who wish to see the body of law under which the English people were living for more than two centuries, and the language of the upper classes in the time of the Edwards, cannot do better than study these volumes, which are furnished with an excellent translation, glossary, and index.