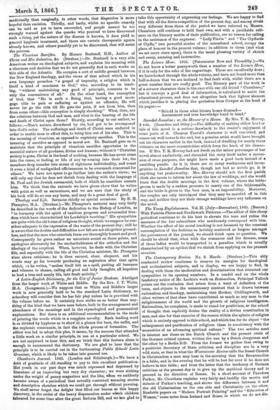 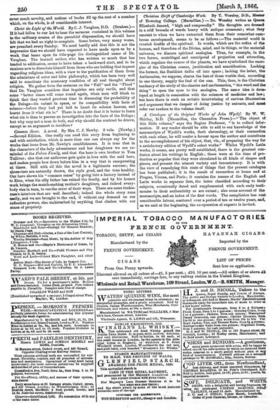 continues to reserve its energies for theological and ecclesiastical subjects, and to display, we are happy to find, in dealing with them the moderation and discrimination that attracted our sympathies in its opening numbers. In a candid and on the whole laudatory notice of Mr. Leckie's work on Rationalism, Principal Tulle& points out the confusion that arises from a want of definition of the term, and objects to the unnecessary centrast that is drawn between rationalism and theology, maintaining that Hooker, Chillingworth, and other writers of that class have contributed as much as any men to the enlightenment of the world and the growth of religious intelligence. Rationalism, he complains, is made to stand for positivism, or the school of thought that implicitly denies the reality of a divine constitution in man, and also for that exercise of the reason within the sphere of religion which is entirely opposed to this school, and which has for its object "the enlargement and purification of religious ideas in consistency with the necessities of an advancing spiritual culture." The two articles next in interest are those on the Dutch Church and the present crisis of the German critical system, written the one by a Dutch clergyman and the other by a Berlin D.D. From the former we gather that owing to a positivist Secretary of State c.riticism and discipline are in a very wild state, so that in what the Westminster Review calls the freest Church in Christendom a man may hoar in the morning that the Resurrection is a fable, and in the evening that he will be lost for ever if he does not believe in this fable ; and from the latter that the tendency of German criticism at the present day is to give up the mythical theory and to proceed in the direction of Ronan. In a short account of Theodore Parker, Mr. Cheatham explains very fairly and lucidly the merits and defects of Parker's teaching, and shows the difference between it and the old Unitarianism on the one side and Christianity on the other. Readable papers on "Modern Portrait Painting" and the " Education of Women," some notes from Ireland and Rome, in which we do not die- ()over much novelty,. and notices of books fill op the rest of a number which, on the whole, is ot considerable interest