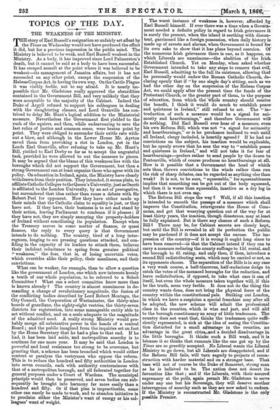 Tffil WEAKNESS OF THE MINISTRY.

the Times on Wednesday would not have produced the effect it did, but for a previous impression in the public mind. The Ministry is believed to be weak, and Earl Russell weakest in the Ministry. As a body, it has improved since Lord Palmerston's death, but it cannot be said as a body to have been successful. It has escaped assault at the point where it was believed to be weakest—its management of Jamaica affairs, but it has not succeeded on any other point, except the suspension of the Habeas Corpus Act, in having its own way. On the Cattle Plague it was visibly feeble, not to say afraid. It is nearly im- possible that Mr. Gladstone really approved the absurdities contained in the Government Bill, and very unlikely that they were acceptable to the majority of the Cabinet. Indeed the Duke of Argyll refused to support his colleagues in dealing with the slaughtering clauses, and Lord Granville has con- trived to delay Mr. Hunt's logical addition to the Ministerial measure. Nevertheless the Government first yielded to the rush of the squires, and then, while endeavouring to save the last relics of justice and common sense, were beaten point by point. They were obliged to surrender their cattle rate with- out a blow, and although in the Lower House Mr. Ayrton saved them from provoking a riot in London, yet in the Lords Earl Granville, after refusing to take up Mr. Hunt's Bill, yielded to Earl Derby so far as to accept the ungrateful task, provided he were allowed to cut the measure to pieces. It may be argued that the blame of this weakness lies with the boroughs which did not support the Government, but then a strong Government can at least organize those who agree with its policy. On education in Ireland, again, the Ministry have clearly withdrawn from their position. They intended, it seems plain, to affiliate Catholic Colleges to the Queen's University, just as Oscott is affiliated to the London University, by an act of prerogative, but surrendered that idea rather than rouse a debate with Sir Robert Peel for opponent. Now they have either made up their minds that the Catholic claim to equality is-just, or they have not. If they have, their business is to act and stand by their action, leaving Parliament to condemn if it pleases ; if they have not, they are simply annoying the property-holders of Ireland without conciliating its population. Except when the Treasury moves in some matter of finance, or quasi finance, the reply to every query is that Government intends to do nothing. The country, tired of a long inter- regnum, longing to see pressing questions attacked, and con- fiding in the capacity of its leaders to attack them, believes their indolent reluctance to spring from genuine political "weakness," the fear, that is, of losing uncertain votes, which overrides alike their policy, their manliness, and their convictions.

What can be weaker, for example, than to allow a question like the government of London, one which now interests keenly a tenth of our whole population, to be referred to a Select Committee What can a select committee lo:low more than is known already ? The country is almost unanimous in de- manding a change of revolutionary magnitude, the fusion of the conflicting bodies described by Lord Robert Montagu, the City Council, the Corporation of Westminster, the thirty-nine boards of guardians, the eighty-eight vestries, the thirty-seven districts for registration, into some manageable entity able to act without conflict, and on a scale adequate to the magnitude of the admitted need. A really strong Ministry would pro- bably merge all substantive power in the hands of a central Board ; and the public imagined from the inquiries set on foot by the Home Secretary that he had a plan to that end. If he had, it has been laid aside, 'and metropolitan anarchy is to continue for one more year. It may be said that London is powerful and local resistance too strong to be overcome, but granting that, a scheme has been broached which would either content or paralyze the vestrymen who oppose the reform. This is to reduce the hundred and fifty authorities in London into seven councils, each with authority conterminous with that of a metropolitan borough, and all federated together for general purposes under a Court of Wardens. The municipal principle would then be preserved, and seven bodies can sub- sequently be brought into harmony far more easily than a hundred and fifty. Or if that plan is impracticable, some other can surely be made to work, and to abandon initiative is to proclaim either the Minister's want of energy or his col- leagues' want of weight.

The worst instance of weakness is, however, afforded by Earl Russell himself. If ever there was a time when a Govern- ment needed a definite policy in regard to Irish grievances it is surely the present, when the island is seething with discon- tent, garrisoned like a foreign possession, when daily history is made up of arrests and alarms, when Government is bound for its own sake to show that it has plans beyond coercion. Of the numerous Irish grievances there is one, as it happens, on which Liberals are unanimous—the abolition of the Irish. Established Church. Yet on Monday, when asked whether Government intended to take any steps to remove that evil, Earl Russell, admitting to the full its existence, allowing that he personally would endow the Roman Catholic Church, de- claring openly that if "by one single day's sitting, such as we had the other day on the suspension of the Habeas Corpus' Act, we could apply after the present time the funds of the Protestant Church, or the greater part of them, to the purpose of education, from which the -Whole country should receive the benefit, I think it would do much to establish peace- and quietness in Ireland," still refused to act. The "in- troduction of such a measure would be a signal for ani- mosity and heartburnings," and therefore Government will do nothing. Did Earl Russell ever hear of a measure, even his own Reform Bill, which was not "a signal for animosity and heartburnings," or is he perchance inclined to wait until all Ireland, clergy included, is heartily agreed ? If he had no convictions on the subject, his inaction would be explicable, but he openly avows that he sees the way to "establish peace and quietness in Ireland," and will not take it for fear of heartburnings—prefers rather to send people by the dozen to Pentonville, which of course produces no heartburnings at alL How is it possible that a Government the head of which acts thus, throws convictions to the winds rather than run the risk of sharp debates, can be regarded as anything else than weak? It is not, to be sure, "squeezable," for squeezableness implies that something can be got out of the body squeezed, but then it is worse than squeezable, inactive as a dry log in which there is not even sap.

The Reform Bill stops the way ? Well, if all this inaction is intended to smooth the passage of a measure which shall improve the Constitution, reinvigorate the House of Com- mons, and get that wearying question oat of the way for at least thirty years, the inaction, though disastrous, may at least be fully explained. But is there any chance of such a Reform_ Bill ? There may be, for Cabinet secrets are closely kept, but until the Bill is revealed in all its perfection the public: may be pardoned if it does not accept the excuse. The im- pression of the country—if it is wrong it ought long since to have been removed—is that the Cabinet intend if they can to carry a measure reducing the county suffrage to 15/. rental, and the borough to 6/. rating, and only then, if then, introduce a second Bill redistributing seats, which may be carried or not, as its opponents choose. The separation of the Bills is in any case a very weak course, a half-timorous, half-audacious dodge to catch the votes of the menaced boroughs for the reduction, and leave redistribution, if opposed, to take what care it can of itself, but even the whole measure taken together will, if this be the truth, seem very feeble. It does not do the thing the country wants done, does not bring the physical force of the country within the constitutional pale. Striking out London, in which we have a suspicion a special franchise may after all be adopted, the new scheme will admit the professional class in the counties, which is wise and just, and will add to the borough constituency an army of little tradesmen. The country does not want that, thinks the tradesmen quite suffi- ciently represented, is sick at the idea of seeing the Constitu- tion disturbed for a small advantage in the counties, no advantage in the great cities,Band a decided disadv.antage in the little boroughs. It thinks -such a Bill weak, and it is bdcause it so thinks that rumour's like the one got up by the Times are so greedily accepted. No Liberal wants the Liberal Ministry to go down, but all Liberals are disappointed, and if the Reform Bill fails, will turn eagerly to projects of recon- struction with harder material and on a stronger base. That base will not of course be the Duke of Somerset, strong man as he is believed to be. The nation does not desert its favourites like that ; and if the Liberals, with their assured supremacy at the polls, again permit Mr. Gladstone to serve under any one but his Sovereign, they will deserve another interregnum of anarchy such as they are now asked to endure. If the Ministry is reconstructed Mr. Gladstone is the only possible Premier.