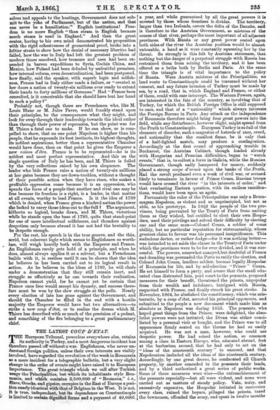 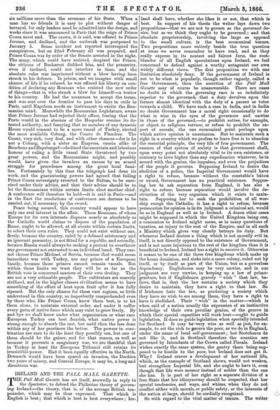 retains its authority in Turkey, and a most dangerous incident has therefore passed off without a war. Englishmen, who never un- derstand foreign politics, unless their own interests are visibly involved, have regarded the revolution of the week in Roumania as a mere incident for a telegraphic bulletin, but a very slight change in the order of events might have raised it to European importance. The great triangle which we call after Turkish usage the Principalities, bat which its inhabitants style Rou- mania, and which contains 3,500,000 of " Rournans," i e., Slays, Greeks, and gipsies, occupies in the East of Europe a posi- tion nearly identical with that of Belgium in the West. It is not, it is true, independent, but its dependence on Constantinople 1.4mited to certain dignified forms and a payment of 40,000/. a year, and while guaranteed by all the great powers it is coveted by those whose frontiers it divides. The territory, larger than two Irelands, covers the delta of the Danube, and is therefore to the Austrian GOvernment, as mistress of the course of that river, perhaps the most important of all adjacent provinces With Russia or any great power seated upon both sides of the river the Austrian position would be almost untenable, a hand as it were constantly squeezing her by the throat. So strongly is this felt by Austrian statesmen, that nothing but the danger of a perpetual struggle with Russia has restrained them from seizing the territory, and it has been offered as a bribe both by Berlin and Paris. At the same time the triangle is of vital importance to the policy of Russia. Were Austria mistress of the Principalities, no land route to Constantinople could be traversed without her consent, and any future invasion of Turkey. mast be made by sea, by a road, that is, which England and France, or either of them, could with ease intercept. The Western Powers, again, are interested in the fate of the country, as involving that of Turkey, for which the British Foreign Office is still supposed to care, and that of a "nationality" w.hich always interests the Foreign Bureau in Paris. Any attack on the independence of Roumania therefore might bring four great powers into the field, while any disturbance, however slight, might spread from the Pruth to Constantinople. European Turkey is so full of the elements of disorder, such a magazine of hatreds of race, creed, and nationality that the smallest flame, be it only that of a half-lighted match, may produce a conflagration. Accordingly at the first sound of approaching trouble in Bucharest, the Austrian Cabinet, though loaded already with Hungarian and Prussian difficulties, began to "watch events," that is, to collect a force in Galicia, while the Russian Government, though sadly hampered for money, suddenly placed a strong corps d'arnae upon the banks of the Pruth. Had the revolt produced even a week of civil war, or seemed likely to terminate in favour of Prince Couza, Russian troops would have crossed the river "in the interests of order," and that everlasting Eastern question, with its endless ramifica- tions, would have been upon as again. Fortunately the ruler of the Principalities was only a Brum- magem Napoleon, as violent and as unprincipled, but not as able, as his prototype. In 185.9 the people of the two pro- vinces, being prevented by the Treaty of Paris from uniting them as they wished, but entitled to elect their own Hospo- dars, used their privilege and. solved their difficulty by electing one and the same man—Colonel Comm, a soldier of some ability, but no particular reputation for statesmanship, whose greatest claim to favour was his presumed insignificance. This audacious device, or rather dodge—for it was nothing better—. was intended to set aside the clause in the Treatyof Paris under which the provinces were to be for ever divided, and it was suc- cessful. The powers, somewhat annoyed,but doubtful of France and dreading war, persuaded the Porte to ratify the election, and Colonel John Couza, landless soldier, became legally liospod,an of Roumania for life, and. by self-election " Prince " Comm. He set himself to form a party, and aware that the small edu- cated class distrusted him, paid court to the peasants, proposed measures for their benefit, threatened the priests, unpopular from their wealth and indolence, intrigued with Russia, coquetted with France, and finally struck his great stroke. In November, 1864, he abolished the oonstituaney, which was aris- tocratic, by a coup d'e'tat, arrested his principal opponents, and submitted to the people a new document which made him as absolute as Napoleon was during 1853. The peasants, who hoped great things from the Prince, were delighted, the abso- lutist powers were not irritated, the Divan was either conci- liated by a personal visit or bought, and the Prince was to all appearance firmly seated on the throne he had so easily acquired. He was not a man, however, who could use despotic power. He had seized the notion, so common among a class in Eastern Europe, who, educated abroad, fret at the barbarism around, that he had only to act on the "ideas of the nineteenth century" to succeed, and that Napoleonism included all the ideas of the nineteenth century. Accordingly, by one great decree, he confiscated all Church property, by another conceded to the peasants their lands, and by a third authorized a great series of public works. Some of these measures were wise—the enfranchisement of the peasants especially—but all were violent, and none were carried out as matters of steady policy. Vain, noisy, and excessively expensive, the Hospodar irritated, in succession every class, ruined the boyars, pillaged the priests, taxed the townsmen, offended the army, and spent in twelve months

six millions more than the revenues of his State. When a man has no friends it is easy to plot without danger of betrayal, for only leaders need be admitted into the design, and weeks since it was announced in Paris that the reign of Prince Couza must end. The crown, it is said, was offered to Prince

Jerome, and declined, and the outbreak was postponed to January 5. Some incident not reported interrupted the conspirators, but on 22nd February all was prepared, and Prince Couza was by order of the Senate arrested in the night. The army, which could have resisted, despised the Prince, the citizens of Bucharest disliked him, and the peasantry, even if inclined, could not interfere in time, and the absolute ruler was imprisoned without a blow having been struck in his defence. In prison, and we imagine with small chance of life if he refused, he was offered his liberty on con- dition of declaring any Rouman who resisted the new order of things—that is, who struck a blow for himself—a traitor to his country. He had the meanness to accept the terms, and was sent over the frontier to pass his days in exile in Paris, until Napoleon needs an instrument to excite the Rou- manian mind. Meanwhile the Roumanian Legislature, aware that Prince Jerome had rejected their offers, fearing that the Porte would in the absence of the Hospodar resume its de- tested authority, and fancying that no member of any dynastic House would consent to be a mere vassal of Turkey, elected the most available Coburg, the Comte de Flandres. The Count, very rich, very deaf, and with other chances—for is he not a Coburg, with a sister an Empress, cousin alike of Bourbons andHapsburgs ?—declined the uncertain and laborious honour of ruling a little vassal State threatened by two great powers, and the Roumanians might, and possibly would, have given the invaders an excuse by an armed struggle for precedence among the great local fami- lies. Fortunately by this time the telegraph had done its work, and the guaranteeing powers had agreed that failing Prince Couza sovereignty reverted to the Sultan, to be exer- cised under their advice, and that their advice should be to let the Roumanians within certain limits elect another chief. A conference will therefore be held—it is said in Paris—and in the East the resolutions of conference are decrees to be carried out, if necessary, by the sword.

Peace being secured, this country would appear to have only one real interest in the affair. These Roumans, of whom Europe for its own interests disposes nearly as absolutely as the Catholic world claims to dispose of the population of Rome, ought to be allowed, at all events within certain limits, to select their own ruler. They could not exist without one, firstly, because the country, ruled by a debased aristocracy and an ignorant peasantry, is not fitted for a republic, and secondly, because Russia would always be seeking a pretext to overthrow any government not entrusted to an individual hand. They can- not choose Prince Michael of Servia, because that would mean immediate war with Turkey, nor any prince of a European family, because those princes cannot remain vassals. But within these limits we trust they will be as far as the British vote is concerned masters of their own destiny. They are not a very estimable people. The cultivators are scarcely civilized, and in the higher classes civilization seems to have something of the effect of heat upon fruit after it has fully ripened. But the only chance for these vast regions, so little understood in this country, so imperfectly comprehended even by those who, like Prince Couza, know them best, is to let them alone, to maintain external order, and under it suffer every germ of native force which may exist to grow freely. By and bye we shall know under what organization or what race European Turkey can best flourish, what native power is strong enough to absorb the rest, but until then the less done within any of her provinces the better. The powers in com- bination are sure to do the least they possibly can, lest one of them should be the gainer, and for that reason, as well as because it prevents a sanguinary war, we are thankful that in Turkey at least the European Tribunal still retains its irresistible power. Had it been equally effective in the North, Denmark would have been spared an invasion, the Duchies two years of misery, and Central Europe, it may be, a long and disastrous war.