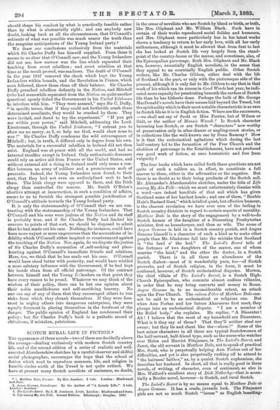 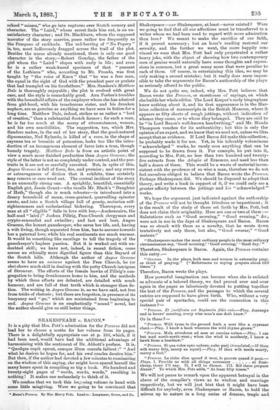 THE appearance of three novels—two of them are decidedly above the average—dealing exclusively with modern Scotch country life, and of the second edition of a series of realistic and well- executed Aberdeenshire sketches by a careful observer and skilful social photographer, encourages the hope that the school of fiction which used to reproduce manners, life, and religion in humble circles north of the Tweed is not quite extinct. We have at present many Scotch novelists of eminence, no doubt, • 1. Matthew Dale, runner. By Mrs. Sanders. 2 vols. London : Blackwood and Sons.

4. Life among lip Ain Folk. Second Edition. Edinburgh : Douglas. 1883. in the sense of novelists who are Scotch by blood or birth, or both, like Mrs. Oliphant and Mr. William Black. Such have in certain of their works reproduced social foibles and humours, and Mrs. Oliphant more particularly has in her latest works shown a tendency to return to her early love, with all her early enthusiasm, although it must be allowed that from first to last she has looked at Scotch life very largely from the stand- point of the country-house or the manse, and sometimes, also, of the Episcopalian parsonage. Both Mrs. Oliphant and Mr. Black are, however, essentially English novelists, in the sense that they appeal to an essentially English public. Other Scotch writers, like Mr. Charles Gibbon, either deal with the life of Scotland in the past, or only with the picturesque side of the present, although it is only fair to Mr. Gibbon to say that in that work of his which ran its course in Good Words last year, he indi- cated more capacity for penetrating beneath the surface of Scotch life than he has hitherto done. Perhaps the bulk of Mr. George MacDonald's novels have their scenes laid beyond the Tweed, but the spirituality which is their most notable characteristic is as rare in Scotch life as it is in English fiction. Where are the successors, —we shall not say of Scott or Miss Ferrier, but of Wilson or Galt, or the author of .711ansie Wauch ? Is Scotch character becoming less Scotch, or are Scotch " characters " now worthy of preservation only in after-dinner or angling-roost stories, or in collections like the well-known one by Dean Ramsay? How is it that the ecclesiastical agitations which during the last half-century led to the formation of the Free Church and the abolition of patronage in the Establishment, have not produced one good work of fiction, at once humoristic and free from vulgarity ?

The four books which have called forth these questions are not quite of such a calibre as, in effect, to constitute a full answer to them, either in the affirmative or the negative. But there is no doubt as to their being products of the Scotch soil. Mr. Alexander's Aberdeenshire sketches, under the title of Life among My Ain Folk—which we must unfortunately dismiss with a word—are indeed handfuls of that soil which has given Scotland some of her hardest heads ; and one of them, "Bauble Huie's Bastard Geet," which is f ull of quiet, but effective humour, is the clearest revelation we have ever seen of the feeling in Scotch country districts in regard to certain aspects of morality. Matthew Dale is the story of the engagement by a well-to-do Scotch farmer of the daughter of a .Dissenting Presbyterian minister, first as housekeeper, and then as wife. The scene of Angus Graeme is laid in a Scotch country parish, and Angus Graeme himself is a character of such a kind as to make other people than Mr. Gladstone fall into the mistake that Scotland is "the land o' the leal.'? The Laird's Secret tells of the fortunes of two daughters of the manse, one of whom marries "the laird," and the other the doctor, in a Scotch parish. There is in all three an abundance of the Scotch dialect—most of it wonderfully pure, too—of Scotch proverbs, and of Scotch religion, in the form, it must be confessed, however, of Scotch ecclesiastical disputes. Morton, the chief villain of The Laird's Secret, is a Scotch High. Church Episcopalian, who commits almost endless villanies, in order that be may bring converts and money to Rome. Angus Graeme is, to no inconsiderable extent, an attack upon the Free Church. The raison d'être of Matthew Dale can- not be said to be an ecclesiastical or religious one. But when Ann Forbes and her future Ahasuerus first meet, they plunge into an ecclesiastical dispute. " I am a member of the Relief body," she explains. He replies, " A Dissenter ! Ah ! I believe that the most of my household are Dissenters. What is it they say of them ? That they'll neither steal nor swear; but they lie and cheat like the—ahem !" Some of the best minor characters in all three are typical Scotchwomen of the half-servant, half-friend type, such as the nurse who watches over Helen and Harriet Fitzjames, in The Laird's Secret, and Janet, the old servant in Matthew Dale, not to speak of practical Mrs. Scott, who is perpetually helping Ann Forbes out of her difficulties, and yet is also perpetually rushing off to attend to the bairnses' faither," as, by a quaint Scotch euphemism, she describes her husband. In short, all that is really.good in these novels, of writing, of character, even of sentiment, as also in Mrs. Walford's excellent story of Dick Netherby=that is essen- tially a Border novel, however—is Scotch, and rural Scotch.

The Laird's Secret is by no means equal to Matthew Dale or Angus Graeme. It has a crude, juvenile look. The Fitzjames girls are not so much Scotch "lasses" as English boarding- school " misses," who go into raptures over Scotch scenery and character. The "Laird," whose secret finds him out, is an un- satisfactory character ; and Dr. Blackburn, whom the supposed narrator of the story marries, poses rather too frequently as the Pomposo of rectitude. The red-herring of "No Popery " is, too, most ludicrously dragged across the trail of the plot. Besides the nurse already mentioned, there is only one good character in the story,—Robert Gourley, the father of the girl whom the " Laird " elopes with early in life ; and even he is a rather weak-kneed specimen of that " peasant of the Lothians" who, according to Mr. Fronde, was first taught by " the voice of Knox " that " he was a free man, the equal in the sight of God with the proudest peer or prelate that had trampled on his forefathers." Mrs. Sanders's Matthew Dale is thoroughly enjoyable ; the plot is evolved with great care, and the Style is remarkably good. Ann Forbes's troubles with the household affairs of the employer whom she has admired from girl-hood, with his treacherous sister, and his drunken nephew, are as genuine as anything we have seen in fiction for a long time. Matthew Dale, indeed, strikes us as rather a "lord of creation," than a subitantial Scotch farmer ; for such a man, he is far too mach at the mercy of circumstances, women, and his own sensibilities. The suggestion, too, which Mrs. Sanders makes, in the end of her story, that the good-natured dipsomaniac, Ned Rylands, is killed of a cure, in the shape of cayenne tea or bromide of potassium, looks too like the intro- duction of an incongruous element of farce into a true, though homely tragedy. Matthew Dale is from an artistic point of view a much more finished production than Angus Graeme; the style of the latter is not so completely under control, and the por- traits in it are not so carefully executed. Bat, in spite of this, Angus Graenw is full of force, fire, and promise ; and any errors or extravagances of diction that it exhibits, time certainly may remove or care weed out. The central incident of the story is an unusually strong one. A sprightly, beautiful, essentially English girl, Jessie Grant—who recalls Mr. Black's "Daughter of Heth," though she is mach robuster—is introduced into a dreary household of mean, cross-grained, quarrelling. spinster aunts, and into a Scotch village full of gossip, sectarian self- righteousness and ecclesiastical bickering. Thereupon, every man at all " eligible " falls in love with ber,—Auchencairn, the half-mad " laird';" Joshua Pillrig, Free-Church clergyman and crypto-sensualist and swindler ; and last and best, Angus Graeme, the honest gamekeeper, who saves her life, and, having a wife living, though separated from him, has to assume towards her a paternal love, while his real sentiments are much warmer. It would be something like sacrilege to tell the tragedy of the gamekeeper's hapless passion. But it is worked out with un- doubted skill ; we have not, indeed, in recent fiction, come across an ethically more dignified figure than this Bayard of the Scotch hills.• Although the author of Angus Graeme seems to have an animus against the Free Church, he (or she) shows much skill in dealing with the petty Church intrigues of Stronvar. The efforts of the female hawks of Pillrig's con- gregation to bring drunkenness home to him, and the methods by which these efforts are defeated, are detailed with much humour, and are full of that truth which is stranger than fic- tion. The writing in Angus Graeme is, as we have said, not free from tricks of rhetoric; but these are forgotten, in presence of its buoyancy and " go," which are maintained from beginning to end. Angus Graeme is an emphatically " sound " novel, but the author should give us still better things.