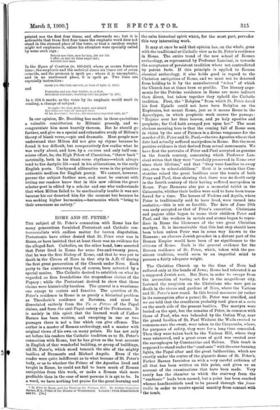 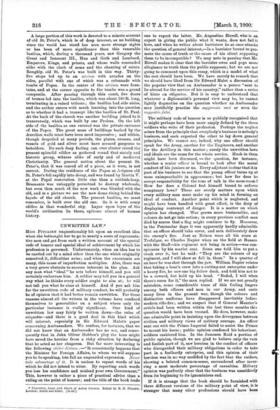 THE subject of St. Peter's connection with Rome has for many generations furnished Protestant and Catholic con- troversialists with endless matter for barren disputation. Protestants have either denied that St. Peter ever was in Rome, or have insisted that at least there was no evidence for the alleged fact. Catholics, on the other hand, have asserted that Peter lived in Rome for some five-and-twenty years, that he was the first Bishop of Rome, and that be was put to death in the Circus of Nero in that city in A.D. 67 during the first great persecution of the Church under Nero. Each party to the controversy has, of course, been actuated by a special motive. The Catholic desired to establish on what he regarded as firm foundations the stupendous claims of the Papacy ; while the Protestant desired to show that those claims were historically baseless. The quarrel is a wearisome one except to zealots and fanatics. The question of St. Peter's residence in Rome is as purely a historical problem as Theodoric's residence at Ravenna, and must be dissociated entirely from the Tu es Petrus of the Papal claims, and from the anti-Papal outcry of the Protestant. It is mainly in this spirit that the learned work of Father Barnes has been written, and excepting in one or two passages there is not a line which can give offence. The author is a master of Roman arclueolwy, and a master with original views of his own on many points. He has not only set before his readers the Catholic tradition as to St. Peter's connection with Rome, but he has given us the best account in English of that wonderful building, or group of buildings, old St. Peter's, which stood beneath the site of the mighty basilica of Bramante and Michael Angelo. Even if the reader were quite indifferent as to what became of St. Peter's body, or as to whether the Prince of the Apostles lived and taught in Rome, he could not fail to learn much of Roman antiquities from this work, or make a Roman visit more profitable than in the case of most persons it is apt to be. In a word, we have nothing but praise for the great learning and St. Peter in Rome, and his Tomb on the Vatican Hill. By Arthur Stapylton Barnes, MA., Priest of the Diocese of Westminster. London : Swan Sonnenscheln And CO. pls.)

the calm historical spirit which, for the most part, pervades this very interesting work.

It may at once be said that opinion has, on the whole, gone with the traditional or Catholic view as to St. Peter's residence in Rome. The entire trend of the new school of Roman archwology, as represented by Professor Laneiani, is towards the acceptance of persistent tradition where not contradicted by patent facts. If this principle is applied to Roman classical arckeology, it also holds good in regard to the Christian antiquities of Rome, and we must not be deterred from holding to it by the manufactured "relics" of which the Church has at times been so prolific. The literary argu- ments for the Petrine residence in Rome are more indirect than direct, but taken together they uphold the Catholic tradition. First, the " Babylon " from which St. Peter dated his first Epistle could not have been Babylon on the Euphrates, but meant Rome, just as it means Rome in the Apocalypse, in which prophetic work occurs the passage : "Rejoice over her thou heaven, and ye holy apostles and prophets ; for God bath avenged you upon her." The most obvious meaning here is that the coming fall of Rome seen in vision by the seer of Patmos is a divine vengeance for the murder of St. Peter and St. Pan1,—the two Apostles who at that date had actually suffered martyrdom in Rome. But the most positive evidence is that derived from actual monuments. We have first the portraits of Peter and Paul accepted as genuine in the fourth century, concerning which Professor Lan. ciani writes that they were "carefully preserved in Rome ever since their lifetime," and that "they were familiar to every one, even to school-children." Next it is certain that Con- stantine raised the great basilicas over the tombs of both Peter and Paul, thus showing that there was no doubt early in the fourth century of their having suffered martyrdom in Rome. Pope Damasus also put a memorial tablet in the Catacombs, whither their bodies were said to have been trans- ferred for a time. The houses of Padens and Aquila, where Peter is traditionally said to have lived, were turned into oratories,—this is not so forcible. The date of June 29th was early accepted as that of Peter's execution. Christians and pagans alike began to name their children Peter and Paul, and the workers in metals and stones began to repro- duce in Rome the likenesses of the two great Christian martyrs. It is inconceivable that this last step should have been trken unless Peter was in some way known to the Romans; an obscure Jewish preacher in a distant part of the Roman Empire would have been of no significance to the citizens of Rome. Such is the general evidence for the Roman residence of St. Peter, which, taken with the per- sistent tradition, would seem to an impartial mind to possess a fairly adequate weight.

The Christian Church up to the time of Nero had suffered only at the hands of Jews ; Rome had tolerated it as a supposed Jewish sect. But Nero, in order to escape from the accusation of having set fire to the magnificent city, fastened the suspicion on the Christians who were put to death in the circus and gardens of Nero, where the Vatican and St. Peter's now stand. In this brutal massacre (or rather in its resumption after a pause) St. Peter was crucified, and we are told that the crucifixion probably took place at a meta on the south side of the present basilica. The martyrs were buried on the spot, but the remains of Peter, in common with those of Paul, who was beheaded by the Ostian Way, near the grand basilica of St. Paul Without the Walls erected to commemorate the event, were taken to the Catacombs, where, for purposes of safety, they were for a long time concealed. Then they were taken back to the Vatican Hill, where they were reinterred, and a great cross of gold was erected over the sarcophagus by Constantine and Helena. This tomb is supposed to stand under the" confessio " with the ever-burning lights, the Papal altar and the great baldacchino, which are exactly under the centre of the gigantic dome of St. Peter's. Father Barnes furnishes us with a very careful criticism of all that has been written on this point, and gives us an account of the examinations that have been made. Very rarely has the chamber to which the stairway from the " confessio " leads been opened, but a point has been reached whence handkerchiefs used to be passed through the fenes- trella in order to receive special sanctity from contact with the tomb. A large portion of this work is devoted to a minute account of old St Peter's, which is of deep interest, as no building since the world has stood has seen more strange eights or has been of more significance than this venerable basilica, which, during a thousand years, saw Gregory the Great and Innocent Ia., Hun and Goth and Lombard, Emperors, Kings, and priests, and *hose walls resounded alike with the clash of arms and the chanting of saints. Roughly, old St. Peter's was built in this way. Thirty- five steps led up to an atrium with arcades on the sides, parallel with one of which was a colonnade with tombs of Popes. In the centre of the atrium were foun- tains, and at the corner opposite to the tombs was a grand campanile. After passing through this court five doors of bronze led into the basilica, which was about 340 ft. long, terminating in a raised tribune ; the basilica had side aisles, and the author enters with much learning into the question as to whether it had a transept like the basilica of St. Paul. At the back of the church was another building joined to it transversely, which was built by one Probns. On the left side of the basilica as one entered was the private entrance of the Popes. The great mass of buildings backed by the Aurelian walls must have been most impressive ; and within, though despoiled at many periods, the plates, crosses, and vessels of gold and silver must have seemed gorgeous to beholders. No such deep feeling can ever cluster round the present splendid edifice as gathered round that stately and historic group, witness alike of early and of mediwval Christianity. The general notion about the present St. Peter's, that it was reared all of a piece, as it were, is not correct. During the residence of the Popes at Avignon old St. Peter's fell rapidly into decay, and was found by Martin V. at the Papal restoration little else than a rubbish-heap. Bramante was unhappily permitted to destroy wholesale, but even then much of the new work was blended with the old, and in a picture we see the new dome rising behind the facade of the old church. The present basilica, we must remember, is built over the old one. So it is with every edifice in that wonderful city. Layer upon layer of the world's civilisation lie there, epitome almost of human history.