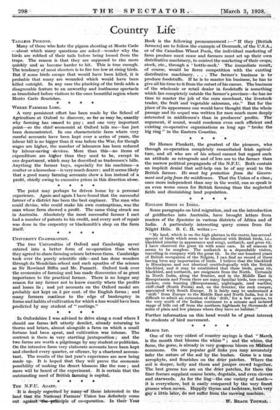 • Some paragraphs on bird thigration,and on the introduction, of goldfinches into Australia, have brought letters from

readers of the Spectator in various districts of Arilea and of India. : A particularly interesting query comes from the Nilgiri Hills. B. C. H. writes " My land, which is on the high plateau in the centre, has several species of birds which seem to be identical with British birds, i.e., blackbird (similar in_appearance and song), nuthatch; and great tit:- I haVe. observed the great tit with some care. In all seasons it seems to be songless. The nuthatch is a dependable visitor; travelling in company with the great tit. In the one hundred years. of British occupation of the Nilgiris, I can find no record of there having been any importation of birds. I believe that the blackbird is Himalayan and not identical ornithologically with the British blackbird, and it may be established that these birds, great tit, blackbird, and nuthatch, are emigrantS from the North.- in North India, along the frontier, and in the Midde East in Mesopotamia and Persia there are many familiar birds, tree creeper, cuckoo, corn bunting (Mesopotamia), nightingale, reed warbler;chiff-chaff (South Persia) and, on the frontier, the rock creeper, associated with South Europe. It is fairly easy to understand drift ' from Europe to the Middle East and North India, but it is difficult to admit an extension of this drift,' for a few species, to the very south' of the Indian continent to a minute and isolated range .of hills cut off from the northern highlands by. thousands of

miles of plain and low plateau where they have no habitat." _ .

Further information on this head would be of great interest to students of bird movement. a *