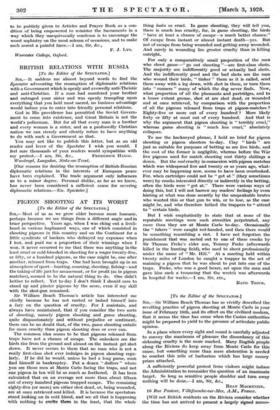 PIGEON SHOOTING AT ITS WORST

[To the Editor of the SPECTATOR.] Snx,—Most of us as we grow older become more humane, perhaps because we see things from a different angle and in truer perspective. Years ago, when I was eking out a liveli- hood in various haphazard ways, one of which consisted in shooting pigeons in this country and on the Continent for a little syndicate of backers who defrayed my expenses when I lost, and paid me a proportion of their winnings when I won, it never occurred to me that there was anything in the least cruel or cold-blooded in shooting for a wager twenty-five, or fifty, or a hundred pigeons, as the case might be, one after another, released from traps. One had been brought up in an atmosphere of sport—hunting, coursing, shooting, fishing—and the taking of life just for amusement, or for profit (as in pigeon matches), seemed to be the natural thing to do. One didn't bother to reflect. Yet to-day I don't think I should care to stand up and plaster pigeons by the score, even if my skill with the shot-gun remained.

Sir William Beach Thomas's article has interested me chiefly because he has not ranted or lashed himself into a fury on the question of cruelty. For I maintain, and always have maintained, that if you consider the two sorts of shooting, namely pigeon shooting and game shooting, quite dispassionately and without prejudice or sentiment, there can be no doubt that, of the two, game shooting entails far more cruelty than pigeon shooting does or ever can.

The common idea seems to be that pigeons released from traps have not a chance of escape. The onlookers see the birds rise from the ground and almost on the instant get shot down. It never occurs to them that no man who is not a really first-class shot ever indulges in pigeon shooting regu- larly. If he did he would, unless he had a long purse, soon find himself in bankruptcy. Put a dozen " duffers " where , you see those men at Monte Carlo facing the traps, and not one pigeon in ten will be so much, as feathered, It has been calculated that on an average not more than about fifteen out of every hundred pigeons trapped escape. The remaining eighty-five (or more) are either shot dead, or, being wounded, are at once retrieved and killed. It is because the spectators stand looking on in cold blood, and see all that is happening with nothing to excite them in the least, that the whole thing looks so cruel. In game shooting, they will tell you, there is much less cruelty, for, in game shooting, the birds " have at least a chance of escape—a much better chance." Of escape from instant or almost instant death—yes. But not of escape from being wounded and getting away wounded. And surely in wounding lies greater cruelty than in killing outright.

For only a comparatively small proportion of the men who shoot game--`• go out shooting "—are first-class shots. The majority are indifferently good or actually bad shots. And the indifferently good and the bad shots are the men who wound. their birds, " tinker " them as it is called, send them away with a leg down, with shot in them, or turn them into " runners " many of which the dog never finds. 14;Tow, what proportion of all the pheasants and partridges, and to a lesser extent grouse, shot at are shot dead, or wounded and at once retrieved, by comparison with the proportion of all the pigeons released from traps at pigeon-matches ? Eighty-five or more out of every hundred ? More likely forty or fifty at most out of every hundred. And that is why the argument that pigeon shooting is " terribly cruel," whereas game shooting is " much less cruel," absolutely collapses.

To use the hackneyed phrase, I hold no brief for pigeon shooting or pigeon shooters to-day. Clay " birds " are just as suitable for purposes of betting as are live birds, and the cost of the former is negligible, whereas before the War live pigeons used for match shooting cost thirty shillings a dozen. But the real cruelty in connexion with pigeon matches which was widespread five and twenty or so years ago, what- ever may be happening now, seems to have been overlooked. For, when cartridges could not be " got at " (they sometimes were) by crooks interested directly or indirectly in the betting, often the birds were " got at." There were various ways of doing this, but I will not harrow my readers' feelings by even hinting at what was done secretly by the unspeakable brutes who wanted this or that gun to win, or to lose, as the case might be, and who therefore bribed the trappers to " attend to " certain birds.

But I wish emphatically to state that at none of the reputable meetings were such atrocities perpetrated, any more than they are at Monte Carlo to-day. Occasionally the " fakers " were caught red-handed, and then there would be something resembling a riot. I have not forgotten the punishment that was meted out to one of these crooks by Sir Thomas. Freke's elder son, Tommy Freke (afterwards killed in the hunting field), who used to shoot professionally under the name of " Mr. Hill." At a meeting held within twenty miles of London he caught a trapper in the act of maiming a pigeon that he was about to put into one of the traps. Freke, who was a good boxer, set upon the man and gave him such a trouncing that the wretch was afterwards in hospital for weeks.—I am, Sir, etc.,