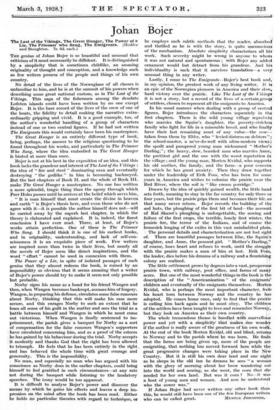 THE genius of Johan Bojer is so beautiful and unusual that criticism of it must necessarily be diffident. It is distinguished by a simplicity that is sometimes_ childlike, an amazing originality of thought and conception, and a knowledge such as few writers possess of the people and things of his own country.

No detail of the lives of the Norwegians of all classes is unfamiliar to him, and he is at the summit of his powers when describing some great national custom, as in The Last of the Vikings. This saga of the fishermen among the desolate Lofoten islands could have been written by no one except Bojer. It is the bare record of the lives of the crew of one of the boats, the fidelity to detail making the narrative extra- Ordinarily gripping and vivid. It is a good example, too, of the author's wonderful handling of a group of characters instead of one or two central figures. If he had not written The Emigrants this would certainly have been his masterpiece.

The Great Hunger is an entirely different type of book, being, perhaps, the answer to the religious questioning to be found throughout his works, and particularly in The Prisoner Who Sang, where the idea embodied in The Great Hunger is hinted at more than once.

Bojer is not at his best in the exposition of an idea, and this book lacks the grandeur and interest of The Last of the Vikings : the idea of " fire and steel " dominating man and eventually destroying " the godlike " in him is becoming hackneyed. But the last chapters of Book II. and the whole of Book III. make The Great Hunger a masterpiece. No one has written a more splendid, tragic thing than the agony through which Peer Holm passes until he arrives at the belief which saves him. " It is man himself that must create the divine in heaven and earth " is Bojer's thesis here, and even those who do not agree with it—it is possible the author himself does not—will be carried away by the superb last chapter, in which the theory is elaborated and explained. It is, indeed, the finest conclusion I have ever read. Three, at least, of Bojer's works attain perfection. One of these is The Prisoner Who Sang. I should think it is one of his earliest books, and in originality, understanding, and lack of self-con- sciousness it is an exquisite piece of work. Few writers are inspired more than twice in their lives, but nearly all the novels of Bojer seem like direct inspirations, and the word " effort " cannot be used in connexion with them.

The Power of a Lie, in spite of isolated passages of such genius that they almost redeem the book, is ruined by an impossibility so obvious that it seems amazing that a writer of Bojer's power should try to make it seem not only possible but probable.

Norby signs his name as a bond for his friend Wangen and then, when Wangen becomes bankrupt, accuses him of forgery. Wangen, in preparing his defence, circulates some false rumours about Norby, thinking that this will make his case more secure, and this enrages Norby to such an extent that he loses all sense of his guilt in the matter and sees the trial as a battle between himself and Wangen in which he must come out victorious. When Wangen is finally sentenced to im- prisonment, the parish gives a banquet for Norby as a sort of compensation for the false rumours Wangen's supporters have circulated concerning him, and as a proof of the esteem he has gained by his behaviour during the trial. Norby accepts ' it modestly and thanks God that the right has been allowed to triumph. He feels that he has been entirely in the right and has behaved the whole time With great courage and generosity. This is the impossibility.

- No man, and especially no man who has argued with his conscience as Norby does in the earlier chapters, could bring himself to feel gratified in such circumstances—at any rate not during the banquet while listening to the laudatory speeches. The irony would be too apparent. • It is difficult to analyse Bojer's power and discover the means by which he gains his effects and leaves a deep im- pression on the mind after the book has been read. Either he holds no particular theories with regard to technique, or he employs such subtle methods that the reader, absorbed and thrilled as he is with the story, is quite unconscious of the mechanism. Absolute simplicity characterizes all his work. Such severity might be wrong in anyone to whom it was not natural and spontaneous ; with Bojer any added ornament would but detract from his grandeur. And his individuality is such that it survives translation—a very unusual thing in any writer.

Lastly, I come to The Emigrants—Bojer's best book and, in my opinion, the greatest work of any living writer. It is an epic of the Norwegian pioneers in America and their slow, hard victory over the prairie. Like- The Last of the Vikingtt it is not a story, but a record of the lives of a certain group of settlers, chosen to represent all the emigrants to America.

In his usual manner when dealing with a group of central figures, Bojer introduces the characters separately in the first chapters. There is the wild young village reprobate who marries the Squire's daughter, the poverty-strickeri family who fight for life in a miserable hovel, and who finally have their last remaining asset of any value—the cow— taken from them by Ebbe, who " levied distress on debtors 71 the school-master, a ne'er-do-well with ultra-modern views the spoilt and pampered young man nicknamed " Mother'S Darling," ; the heavy, slow, bearded man who marries Armei the prettiest girl and the one with the worst reputation hi the village ; and the young man, Morten Kvidal, who supports his old mother, the family, and the farm—a poor concern for which he has great anxiety. Then they draw together under the leadership of Erik Foss, who has been for some years in America and wishes to colonize the prairie near the Red River, where the soil is " like cream porridge."

Drawn by the idea of quickly gained wealth, the little band sets forth, meaning to stay in the far country for only three or four years, but the prairie grips them and becomes their life, to that many never return. Bojer records the building of the sod huts, the ploughing of the first bit of land—the account of Kal Skaret's ploughing is unforgettable, the sowing arid failure of the first crops, the terrible, lonely first winter, the prairie fire, the terror of the Indians, and of course the homesick longing of the exiles in this vast uninhabited plain.

• . The personal details and characterization are not lost sight of. There are beautiful passages between Else, the Squirrel; daughter, and Anne, the peasant girl. " Mother's Darlings'? of course, loses heart and refuses to work, until the struggl with the prairie makes a man of him at last. Erik Fo4a, the leader, dies before his dreams of a railway and a flourishing

The little settlement grows by degrees into a vast, prosperous prairie town, with railway, post office, and farms of maair acres. But one of the most wonderful things in the book is the description of the " Americanization " of the emigrants' children and eventually of the emigrants themselves. Morten Kvidal, who is perhaps the most important character, feets his heart torn between Norway and the country he has adopted. He comes home once, only to find that the prairie is calling him back again and he must obey. The childrOn of the settlers have been taught to love and remember Norway, but they look on America as their own country.

The whole tremendous theme -is handled' with marvello6 power and yet with a simplicity tiat makes one wonder if the author is really aware of the greatness of his own woilt. At the end of the book Morten Kvidal, old and blind, return to Norway and to the parish where he was born. He finds that the farms are being given up, more of the people are

emigrating, that nothing has moved forward here while tile great progressive changes were taking place in the NeW Country. But it is still his own dear land and one night as he sleeps in the old inn he dreams he sees " a wornab with the glory of morning about her brow wandering out into the world and sowing, as she went, the corn that Ore needed for her own land. But was it corn ? No—it Was a host of young men and women. And now he understo141 who the sower was."

If Johan Bojer had never written any other book then this, he would still have been one of the few European writers