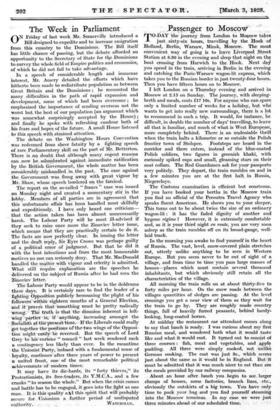 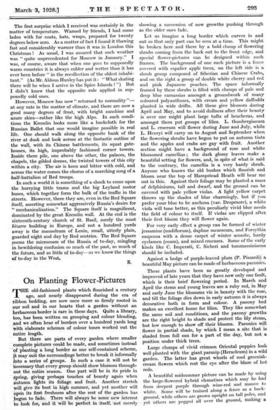 .. - _Passenger to Mo§cO* T O-DAY the journey from London to Moscow

takes just . sixty-six hours, travelling by the. Hook -of Holland, Berlin, Warsaw, Minsk, Moscow. The most convenient way of going is to leave Liverpool Street Station at 8.80 in the evening and sleep that night on-the boat crossing from Harwich to the Hook. Next day you spend in the train, arriving in. Berlin in the evening and catching the Paris-Warsaw wagon-lit express, which takes you to the Russian border in just twenty-four hours. Then you have fifteen hours on to Moscow.

I left London on a Thursday evening and arrived in Moscow at 2.15 on Sunday. The journey, with sleeping= berth and meals, costs £1710s, For anyone, who can spare only a limited number of weeks for a holiday, but whd wants to get into really new surroundings, there is a lot to recommend in such a trip. It would, for instance, be difficult, in double the number of days' travelling, to .leave all that is familiar, and much of what is West European, more completely behind. There is an undeniable thrill when the train halts a kilometre or so outside the Polish frontier town of Stolspce. Footsteps are heard in the corridor and there enters, instead of the blue-coated Polish soldiers, two figures in greenish khaki, with curiously spiked caps and small, gleaming stars on their coat collars. The Red Guardsmen ask for your passports very politely. They depart, the train rumbles on and in a few minutes you are at the first halt in Russia, Niegereloye.

The Customs examination is efficient but courteous.

If you have booked your berths in the Moscow train you find an official of the Peroutra Travel Agency who speaks fluent American. He shows you to your sleeper. This turns out to be about twice the size of an ordinary wagon-lit : it has the faded dignity of another and bygone regime! However, it is extremely comfortable and, as it is your third night en route, you are very soon asleep as the train rumbles off on its broad-gauge, well- laid track.

In the morning you awake to find yourself in the heart of Russia. The vast, level, snow-covered plain stretches out, utterly unlike anything to be seen in Western Europe. But you seem never to be out of sight of a village, and from time to time you pass large masses of houses—places which must contain several thousand inhabitants, but which obviously still retain all the characteristics of the village. All morning the train rolls on at about thirty-five to forty miles per hour. On the snow roads between the villages quantities of sledges are passing. At the level crossings you get a near view of them as they wait for the train to go by. They are roughly made country things, full of heavily furred peasants, behind hardy- looking, long-coated horses.

At midday the restaurant car attendant comes along to say that lunch is ready. I was curious about my first Russian meal, and wondered both what it would taste like and what it would cost. It turned out to consist of three courses : fish, meat and vegetables, and „apple pudding. All three were simply cooked, 'not imlik; German cooking. The cost was just 3s., Which seems just about the same as it would be in England. But must be admitted that it was much nicer to eat than are the meals provided by our railway companies.

.. About. an hour. after - lunch you - begin to see. larger clumps of houses, some factories, branch lines, etc., obviously the outskirts. of a big town. You have only time to pack your. bag-and you find yourself steaming into the Moscow terminus. In my case we were just three minutes ahead of our scheduled time. The first surprise which I received was certainly in the matter of temperature. Warned by friends, I had come laden with fur coats, hats, wraps, prepared for twenty degrees below zero. As a matter of fact I found it thawing fast and considerably warmer than it was in London this Christmas ! As usual, I was assured that such weather was " quite unprecedented for Moscow in January." I was, of course, aware that when one goes to supposedly warm countries it is always colder and wetter than it has ever been before " in the recollection of the oldest inhabi- tant." (As Mr. Aldous Huxley has put it : " What skating there will be when I arrive in the Spice Islands ! ") But I didn't know that the opposite rule applied in sup- posedly cold ones.

However, Moscow has now " returned to normality "- at any rate in the matter of climate, and there are now a good many degrees of frost, with bright sunshine and azure skies—rather like the high Alps. In such condi- tions the Kremlin looks more like a backcloth for the Russian Ballet that one would imagine possible in real life. One should walk along the opposite bank of the river at dusk and look across at the fantastic outline of the wall, with its Chinese battlements, its squat gate- houses, its high, improbably fashioned corner towers. Inside there pile, one above the other, the palaces, the chapels, the gilded domes, the twisted towers of this city within a city. The air is keen and bitter with cold, and across the water comes the chorus of a marching song of a half-battalion of Red troops.

In such a world it is something of a shock to come upon the hurrying little trams and the big Leyland motor buses, which together form the bulk of the traffic in the streets. However, there they are, even in the Red Square itself, asserting somewhat aggressively Russia's desire for " mechanicalization." The Square itself is magnificent, dominated by the great Kremlin wall. At the end is the sixteenth-century church of St. Basil, surely the most bizarre building in Europe, and not a hundred yards away is the mausoleum of Lenin, small, utterly plain, guarded night and day by Red sentries. The Red Square peems the microcosm of the Russia of to-day, mingling in bewildering confusion so much of the past, so much of the future, and so little of to-day—as we know the things of to-day in the West.