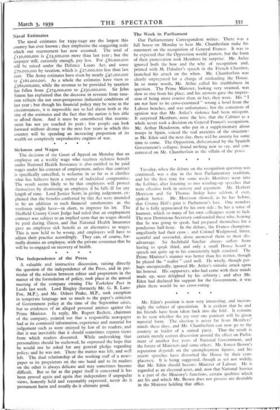 Page 3, 3 March 1939 — The Independence of the Press A valuable and instructive discussion,
Close

The Independence of the Press A valuable and instructive discussion,

raising directly the question of the independence of the Press, and in par- ticular of the relation between editor and proprietors in the matter of the formulation of policy, took place at the annual meeting of the company owning The Yorkshire Post in Leeds last week. Lord Bingley (formerly Mr. G. R. Lane- Fox, M.P.), and Mr. Osbert Peake, M.P., took exception in temperate language not so much to the paper's criticism of Government policy at the time of the September crisis, but to evidences of an alleged personal animus against the Prime Minister. In reply, Mr. Rupert Beckett, chairman of the company, pointed out that a responsible newspaper had at its command information, experience and material for judgement such as were enjoyed by few of its readers, and that it was inevitable that it should sometimes express views from which readers dissented. While undertaking that personalities should be eschewed, he expressed the hope that he would not be asked for any general pledge regarding policy; and he was not. There the matter was left, and well left. The dual relationship of the working staff of a news- paper to its proprietors on the one hand and to its readers on the other is always delicate and may sometimes become difficult. But so far as the paper itself is concerned it has been proved again and again that independent if unpopular views, honestly held and reasonably expressed, never do it permanent harm and usually do it ultimate good.