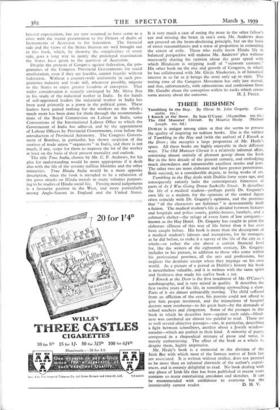 DUBLIN is unique among cities in that she seems to possess the quality of inspiring no tedious hooks. She is the subject of Tumbling in the Hay and (with the author) of I Knock at the Door ; she occupies a large proportion of Mr. Healy's space. All three books are highly enjoyable in their different ways. The Old Munster Circuit is a relatively informal affair, consisting almost entirely of pleasant gossip about the Irish Bar in the first decade of the present century, and embodying much shrewdness and innumerable excellent stories and jests. The other two are more elaborate and have greater pretensions. Both succeed, to a considerable degree, in being works of art.

Tumbling in the Hay deals with Dublin forty years ago, and consequently entirely lacks the contemporary bitterness of parts of As I Was Going Down Sackville Street. It describes the life of a medical student—perhaps partly Dr. Gogarty's own life as a student, for the opinions of the central figure often coincide with Dr. Gogarty's opinions, and the pretence that " all the characters are fictitious " is demonstrably itself a fiction. The medical student's life is divided between lectures and hospitals and police courts, public-houses, brothels, and a cabman's shelter—the refuge of every form of low company— known as the Hay Hotel. Dr. Gogarty has caught in print the elaborate silliness of this way of life better than it has ever been caught before. His book is more than the description of a medical student's labours and recreations, for he manages, as he did before, to make it a survey of the life of the city as a whole—or rather the city above a certain financial level for, like the writers of the eighteenth century, Dr. Gogarty includes in his picture, in addition to those who come within his professional province, all the arts and professions, but neglects the destitute except when they impinge on his own world. As a picture of a period in Dublin's history his book is nevertheless valuable, and it is written with the same spirit and freshness that made his earlier book a joy.

I Knock at the Door is the first instalment of Mr. O'Casey's autobiography, and is very mixed in quality. It describes the first twelve years of his life, in something approaching a slum. Parts of it are almost unbearably moving. The child suffered from an affliction of the eyes, his parents could not afford to give him proper treatment, and the injunctions of hospital doctors were overborne—to his great hurt—by the demands of school teachers and clergymen. Some of the passages in this book in which he describes how—against such odds—blind- ness was combated are almost too painful to read. There are as well several objective passages—one, in particular, describing a fight between schoolboys, another about a Jewish window- mender—which are perfect in their kind. A minority of pages, composed in a rhapsodical mixture of prose and verse, is merely embarrassing. The effect of the book as a whole is, despite them, highly impressive.

Mr. Healy's book is a memorial to the division of the Irish Bar with which most of the famous names of Irish law are associated. It is written without artifice, does not pretend to be more than an informal chronicle of the author's experi- ences, and is entirely delightful to read. No book dealing with any phase of Irish life that has been published in recent years contains so many entertaining anecdotes and sketches. It can be recommended with confidence to everyone but the