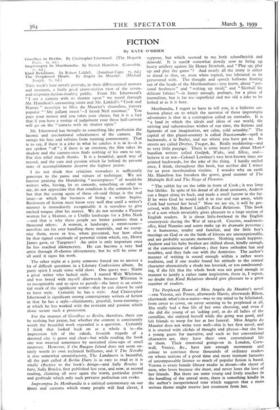 THIS week's four novels provide, in their differentiated matters and manners, a fairly gocd cross-section view of the seven- and-sixpenny-fiction-reading public. From Mr. Isherwood's " I am a camera with its shutter open " we travel through Mr. Hamilton's unexacting satire and Mr. Liddell's " Cook and Nannie " nostalgia to Miss du Maurier's shameless, forever popular " ' My gallant sweet '—I heard Neil murmur." You pays your money and you takes your choice, but it is a fact that if you have a vestige of judgement your three half-crowns will go on the " camera with its shutter open."

Mr. Isherwood has brought to something like perfection the laconic and unemotional selectiveness of the camera. He swings his lens and refrains from running commentary. That is to say, if there is a joke in what he catches it is in it—it is not spoken " off " ; if there is an emotion, the film takes its shadow and the camera-man finds nothing of his own to say. For this relief much thanks. It is a beautiful, quick way of record, and the care and passion which lie behind its present state of accomplishment deserve the highest praise.

I do not think that criticism nowadays is sufficiently generous to the pains and virtues of technique. We are forever praising the blundering " masterpieces " of would-be writers who, having, let us concede, something or other to say, do not appreciate that that condition is the common lot— but that the saying again of these oft-said things is the real issue—at which the business of being a writer begins. Reviewers of fiction must know very well that until a writer's manner is immediately recognisable it is senseless to give excited tongue after his matter. We do not mistake a Picasso woman for a Matisse, or a Utrillo landscape for a John Nash —and that is why these people are better painters than a thousand others. A woman, a landscape, a street-scene- novelists are for ever handling these materials, and we recog- nise them, more or less, when presented, but how often by that signed exactitude of personal vision which, say, Henry James gave, or Turgenev? An artist is only important once be has reached idiosyncrasy. He can become a very bad artist through ill-chosen idiosyncrasy, but he will be none at all until it signs his work.

The other night at a party someone forced me to answer a lot of difficult questions in a Literary Confessions album. In party spirit I made some wild shots. One query was : Name a great writer who lacked style. I named Walt Whitman, and was bored with myself afterwards because Whitman is so recognisable and so open to parody—the latter is an essen- tial mark of the significant writer—that he can almost be said to have style. Certainly he has a style. And Christopher Isherwood is significant among contemporary writers of fiction in that he has a style—eliminatory, graceful, loose-running- at which he has worked with the restraint and passion which alone secure such a possession.

For the manner of Goodbye to Berlin, therefore, there can be nothing but praise, but whether the content is consistently worth the beautiful work expended is a question. Certainly I think that looked back on as a whole it is—the impression left of the rakish, feverish tragedy of a doomed city is grave and clear—but while reading the book one was wearied sometimes by sustained close-ups of small neuroses. However, if On Ruegen Island does not seem en- tirely worth its own technical brilliance, and if The Novaks is also somewhat unsatisfactory, The Landauers is beautiful, all the part called A Berlin Diary is as easy to read as it is vitally effective to the book's design—and Sally Bowles is here, Sally Bowles, first published last year, and now, at second reading, claiming all over again the warm, particular praise and gratitude which only such perverse perfection can evoke.

Impromptu In Moribundia is a satirical commentary on our times and customs which many people will find clever, I suppose, but which seemed to me both schoolboyish and démodé. It is surely somewhat dowdy now to bring up heavy artillery against Sir Henry Newbolt, and " Play up, play up and play the game "? And nearly all the irony is either as dated as that, or, even when topical, too laboured to be persevered with. The thought and speech balloons floating out of the heads of the Moribundians—you know, about " per- sonal freshness " and " waking up tired," and " Sloshall for delicate fabrics "—is funny enough, perhaps, for a piece of journalism, but is far too superficial and too old a joke to be lashed at as it is here.

Moribundia, I regret to have to tell you, is a hitherto un- known planet on to which the narrator of these impromptu adventures is shot in a contraption called an asteradio. It is " a land in which the ideals and ideas of our world, the striving and subconscious wishes of our time, the fictions and figments of our imagination, are calm, cold actuality." The capital of this planet-country is called Nwotsemaht—spell it backwards, a la Butler, and see where you have got to. Its streets are called Drofxo, Tneger, &c. Really maddening—and to very little purpckse. There is some heavy fun about Mori-• bundian writers called Gnilpik, Wahs, and Sllew, and— believe it or not—Colonel Lovelace's two best-known lines are printed backwards, for the joke of the thing. I hardly smiled once, I think, throughout this book, but neither did I wince for us poor moribundian victims. I wonder why on earth Mr. Hamilton has forsaken the grave, good manner of The Midnight Bell and The Siege of Pleasure.

" The rabbit lay on the table in front of Cook ; it was limp but lifelike. In spite of his dread of all dead creatures, Andrew ran a finger along its back, and made a small furrow in the fur. If he were God he would tell it to rise and run away, while Cook had turned her head." Now we are six, it will be per- ceived, with Mr. Robert Liddell's Kind Relations. This book is of a sort which invariably gives pleasure to a large section of English readers. It is about little-boyhood in the English countryside during the War of 1914-18. Cousins, mademois- elles, kind Nannies and aunts make up its dramatis personae ; it is humorous, tender and familiar, and the little boy's musings on God or on the birth of kittens are unexceptionable, and are probably accurate memories. Nothing much happens. Andrew and his baby brother are shifted about, kindly enough, at the convenience of relatives ; they have orthodox fun and troubles, and they fade out with the Armistice. The author's manner of writing is sound enough within a rather worn tradition, and if one reader found his attitude to the central character alternatively a shade too lovesick, or too condescend- ing, if she felt that the whole book was not good enough in manner to justify a rather tame inspiration, there is, I repeat, no doubt that Kind Relations should give pleasure to a great number of readers.

The Perplexed Heart of Miss Angela du Maurier's novel —one Verona, née Foster, afterwards Harris, afterwards Bilton, afterwards what's-in-a-name—was to my mind to be felicitated, from cover to cover, on never seeming to be perplexed at all. She really had a fine life of her own choosing, and even if she did die young of an 'acking corf, as do all ladies of the camellias, she enjbyed herself while the going was good, and left friends to weep for her at her funeral. Miss Angela du Maurier does not write very well—this is her first novel, and it is crusted with clichés of thought and phrase—but she has a young gusto for narrative, and such as her conventional characters are, they have their own conventional life in them. Their emotional goings-on in London, Corn- wall, Venice, &c., have just enough movement and colour to convince those thousands of ordinary readers on whose notions of a good time and more intimate fantasies of uncompassable licence so much of popular fiction is based. Verona is every female library reader in dream—the slayer of men, who loves because she must, and never loses the love of her friends. But there are some young and lively touches in the handling of the unreal story, there is something kindly in the author's inexperienced tone which suggests that a more serious theme might receive just treatment from her.