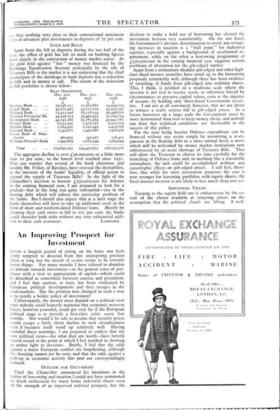 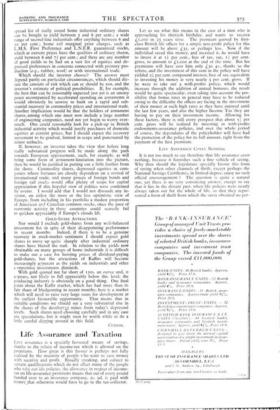 An Improving Prospect for Investment

AFTER a longish period of sitting on the fence one feels sorely tempted to descend from this uninspiring position when at long last the march of events seems to be towards better things. For many months I have refused to abandon an attitude towards investment—in the general sense of pur- chases with a view to appreciation of capital—which could be described as somewhere between caution and pessimism, and I feel that caution, at least, has been vindicated by European political developments and their ravages in the stock-markets. Has the position now changed in such a way as to justify a bolder policy of investment?

Unfortunately, the answer must depend on a political view since nobody could honestly maintain that economic recovery forces, however powerful, could get very far if the European political stage is to provide a first-class crisis every few months. Nor would it be safe to assume that security prices would escape a fairly sharp decline in such circumstances even if business itself stood up relatively well. Having sounded these warnings, I am prepared to confess that my own political views—for what they are worth—have latterly veered round to the point at which I feel justified in showing an amber light to investors. Briefly, I feel that the odds against a major European conflict are lengthening, although the shouting cannot yet be over, and that the odds against a pick-up in economic activity this year are correspondingly reduced.

OUTLOOK FOR GILT-EDGED Until the Chancellor announced his intentions in the matter of borrowing and taxation I could not have summoned up much enthusiasm for many home industrial shares even on the strength of an improved political prospect, but the decision to make a bold use of borrowing has cleared the investment horizon very considerably. On the one hand, the Government's obvious determination to avoid any swinge- ing increases in taxation is a " bull point " for industrial equities, especially against a background of accelerated re- armament, while on the other a borrowing programme of £350,000,000 in the coming financial year suggests certain problems of absorption for the gilt-edged market. Apart from a momentary shudder gilt-edged and other high- class fixed interest securities have stood up to the borrowing proposals remarkably well, although there has been evidence of switching of funds from gilt-edged into ordinary shares. This, I think, is justified on a moderate scale where the investor is not tied to trustee stocks or otherwise forced by circumstances to preserve capital values, even at the expense of income, by holding only short-dated Government securi- ties. I am not at all convinced, however, that we are about to witness a really serious fall in gilt-edged prices. As a future borrower on a large scale the Government must be more determined than ever to keep money cheap, and nobody can deny that technical conditions are favourable to the success of this policy. For the time being heavier Defence expenditure can be financed without any strain simply by permitting a re-ex- pansion in the floating debt to a more normal level, a move which will be welcomed by money market institutions now embarrassed by an acute shortage of Treasury Bills. That will allow the Treasury to choose its time carefully for the launching of Defence loans and, in anything like a reasonable atmosphere, the task could be accomplished without any catastrophic effects on gilt-edged prices. I still feel, there- fore, that while for most investment purposes the case is now stronger for leavening portfolios with equity shares, the fixed interest investor is not likely to lose much sleep just yet.

Turning to the equity field one is embarrassed by the ex- tent of the choice available at tempting prices on the assumption that the political clouds are lifting. A well- spread list of really sound home industrial ordinary shares can be bought to yield between 5 and 6 per cent.; a wide range of second-line industrials offer anything between 6 and 10 per cent.; home rail marginal prior charges, such as L.M.S. First Preference and L.N.E.R. guaranteed stocks, which at current prices have the qualities of ordinary shares, yield between 6 and 7.-f per cent.; and there are any number of good yields to be had on a vast list of equities and de- pressed preferences in concerns connected with primary pro- duction (e.g., rubber, wool) or with international trade.

Which should the investor choose? The answer must depend partly on particular circumstances, which should dic- tate the amount of risk which can or should be run, and the investor's estimate of political possibilities. If, for example, the best that can be reasonably expected just yet is an uneasy peace accompanied by accelerated spending on armaments it would obviously be unwise to bank on a rapid and sub- stantial recovery in commodity prices and international trade. Another implication would be that the holders of armament shares, among which one must now include a large number of engineering companies, need not yet begin to worry over- much. One could reasonably look for a pick-up in British industrial activity which would justify purchases of domestic equities at current prices, but I should expect the recovery movement to be gradual, limited in scope and punctuated by minor setbacks.

If, however, an investor takes the view that before long really substantial progress will be made along the path towards European appeasement, such, for example, as will bring some form of armament-limitation into the picture, then he would be justified in putting out a little further from the shore. Commodity shares, depressed equities in com- panies whose fortunes are closely dependent on a revival of international trade, and many groups of foreign bonds and foreign rail stocks would offer plenty of scope for capital appreciation if this hopeful view of politics were confirmed by events. I would add that I would not dissuade any in- vestor, on either the more or the less optimistic view of Europe, from including in his portfolio a modest proportion of American and Canadian common stocks, since the pace of economic activity in those countries could scarcely fail to quicken appreciably if Europe's clouds lift.

Nor would I exclude gold-shares from any well-balanced investment list in spite of their disappointing performance in recent months. Indeed, if there is to be a genuine recovery in stock-market sentiment I should expect gold shares to move up quite sharply after industrial ordinary shares have blazed the trail. In relation to the yields now obtainable on many groups of home industrials it is difficult to make out a case for hoisting prices of dividend-paying gold-shares, but the attractions of Kaffirs will become increasingly apparent as the yields on industrials and other c impetitive investments diminish.

With gold quoted not far short of I sos. an ounce and, it a.opears, not likely to fall appreciably below this level, the producing industry is obviously on a good thing. One final point about the Kaffir market, which has had more than its fair share of bludgeoning in recent months; here is a market which will need to raise very large sums for development at the earliest favourable opportunity. That means that in suitable conditions we should see a very substantial rise in the shares of the developiqg mines from today's depressed levels. Such shares need choosing carefully and in any case are speculations, but it might soon be worth while to do a little careful diming around in this field.