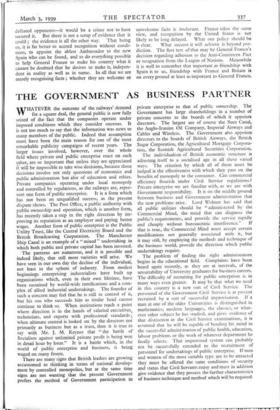 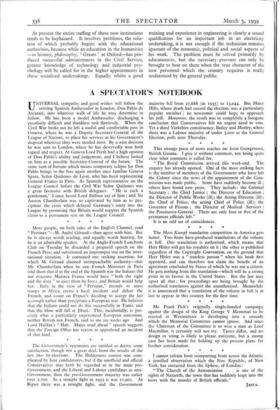 THE GOVERNMENT AS BUSINESS PARTNER

WHATEVER the outcome of the railways' demand for a square deal, the general public is now fully seized of the fact that the companies operate under imposed conditions which they consider onerous. It is not too much to say that the information was news to many members of the public. Indeed that assumption must have been the main reason for one of the most remarkable publicity campaigns of recent years. The larger issues involved, however, over the whole field where private and public enterprise react on each other, are so important that unless they are appreciated it will be impossible to take wise decisions, because those decisions involve not only questions of economics and public administration but also of education and ethics. Private companies operating under local monopoly and controlled by regulations, as the railways are, repre- sent one form of public enterprise. It is a form which has not been an unqualified success, as the present dispute shows. The Post Office, a public authority with public ownership and operation, which is another form, has recently taken a step in the right direction by im- proving its reputation as an employer and paying better wages. Another form of public enterprise is the Public Utility Trust, like the Central Electricity Board and the British Broadcasting Corporatign. The Manchester Ship Canal is an example of a " mixed " undertaking in which both public and private capital has been invested. The patterns are numerous, and it is possible and indeed likely, that still more varieties will arise. We have seen in our own day the decline of the individual, not least in the sphere of industry. From modest beginnings enterprising industrialists have built up organisations which, even in their own lifetime, have been sustained by world-wide ramifications and a com- plex of allied industrial undertakings. The founder of such a concern may feel that he is still in control of it, but his son who succeeds him as titular head cannot continue to think so. When institutions reach a point where direction is in the hands of salaried executives, technicians, and experts with professional standards; when ultimate control is looked on by the directors not primarily as business but as a trust, then it is true to say with Mr. J. M. Keynes that " the battle of Socialism against unlimited private profit is being won in detail hour by hour." It is a battle which, in .the world of public enterprise and business, is being waged on many fronts.

There are many signs that British leaders are growing accustomed to thinking in terms of national develop- ment by controlled monopolies, but at the same time signs are not wanting that the present Government prefers the method of Government participation in private enterprise to that of public ownership. The Government has large shareholdings in a number of private concerns to the boards of which it appoints directors. The largest are of course the Suez Canal, the Anglo-Iranian Oil Company, Imperial Airways and Cables and Wireless. The Government also appoints directors to the boards of British Airways, the British Sugar Corporation, the Agricultural Mortgage Corpora- tion, the Scottish Agricultural Securities Corporation.

The individualism of British economic structure is adjusting itself to a socialised age in all these varied ways. The criterion by which all of them must be judged is the effectiveness with which they pass on the benefits of monopoly to the consumer. Can commercial efficiency flourish under Civil Service regulations ? Private enterprise we are familiar with, as we are with Government responsibility. It is on the middle ground between business and Government administration that the new problems arise. Lord Wolmer has said that all public utilities should be " administered by the Commercial Mind, the mind that can diagnose the public's requirements, and provide the service rapidly and cheaply without bureaucratic interference." If that is true, the Commercial Mind must accept certain modifications not generally associated with it, but it may still, by employing the methods and technique of the business world, provide the direction which public undertakings require.

The problem of finding the right administrators begins in the educational field. Complaints have been heard again recently, as they are at intervals, of the unsuitability of University graduates for business careers. The difficulty of recruiting for public enterprises is in many ways even greater. It may be that what we need in this country is a new sort of Civil Service. The personnel of the Government Civil Service is at present recruited by a sort of successful improvisation. If a man at one of the older Universities is distinguished in mathematics, modern languages, the classics, or what- ever other subject he has studied, and gives evidence of that distinction in the Civil Service examinations, it is assumed that he will be capable of bending his mind to the successful administration of public health, education, labour problems or the work of whatever department he finally selects. That improvised system can probably not be successfully extended to the recruitment of personnel for undertakings of public enterprise. If men and women of the most suitable type are to be attracted they must be offered the same conditions of security and status that Civil Servants enjoy and must in addition give evidence that they possess the further characteristics of business technique and method which will be required. At present the entire staffing of these new institutions tends to be haphazard. It involves problems, the solu- tion of which probably begins with the educational authorities, because while an education in the humanities —in history, philosophy, Greats ' at Oxford—has pro- duced successful administrators in the Civil Service, greater knowledge of technology and industrial psy- chology will be called for in the higher appointments in these socialised undertakings. Equally whilst a good training and experience in engineering is clearly a sound qualification for an important job in an electricity undertaking, it is not enough if the technician remains ignorant of the economic, political and social aspects of his work. The problem must be solved primarily by educationists, but the necessary pressure can only be brought to bear on them when the true character of the new personnel which the country requires is really understood by the general public.