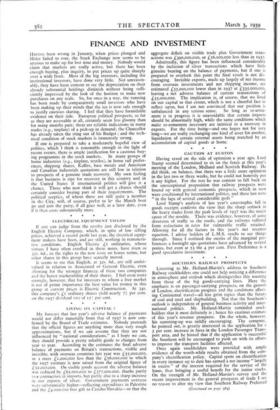 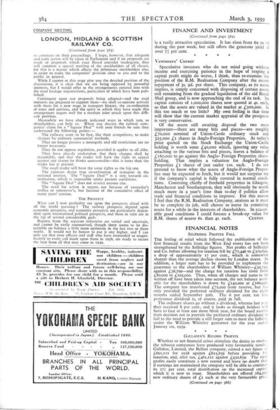 Listening to Mr. Holland-Martin's address to Southern Railway stockholders one could not help noticing a difference in atmosphere and outlook which distinguishes this meeting from those of the big goods-carrying lines. Here the emphasis is on passenger-carrying prospects, on the growth of London, electrification progress and the conditions affect- ing Continental travel—all less grim topics than the future of coal and steel and shipbuilding. Not that the Southern's outlook is independent of general business activity and inter- national politics. Mr. Holland-Martin reminded stock- holders that it most definitely is ; hence his cautious estimate of this year's revenue prospects. On the whole, however. his summing-up was mildly encouraging. The company, he pointed out, is greatly interested in the application for a 5 per cent. increase in fares in the London Passenger Trans- port area, and he hinted that if the application is successful the Southern will be encouraged to push on with its efforts to improve the transport facilities affected. Once again stockholders were provided with ample evidence of the worth-while results obtained from the com- pany's electrification policy. Capital spent on electrification in every instance up to date has earned a net income " largely in excess " of the interest required for the service of the loans, thus bringing a useful benefit for the junior stocks. On the strength of Mr. Holland-Martin's survey and the recent improvement in the general prospects of trade I see no reason to alter my view that Southern Railway Preferred (Continued on page 384) FINANCE AND INVESTMENT (Continued from page 382)

is a really attractive speculation. It has risen from 6o to 66 during the past week, but still offers the generous yield of over 71 per cent.