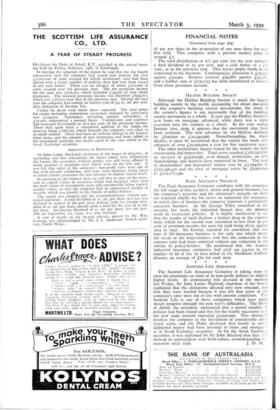 The Pearl Assurance Company combines with life assurance the full range of fire, accident, motor and general business, but the company's accounts and the chairman's remarks on them are watched chiefly for his views on industrial life assurance, in which class of business the company transacts a particularly extensive business. As Sir George Tilley remarked at the meeting last week, the industrial branch does the detailed work on 12,000,000 policies. It is highly satisfactory to see that the results of 1938 disclose a further drop in the expense ratio, which for the second year amounted to less than 3o per cent. of premium income, the ratio for 1938 being 28.25, against 29.4 in 1937. Sir George reported his conviction that this type of life-insurance business is the only one which meets the needs of the wage-earners, and that the reduction in the expense ratio had been achieved without any reduction in the service to policy-holders. He mentioned that the leading industrial insurance companies had paid out £4,000 to the families of 66 of the 79 men killed in the Markham Colliery disaster, an average of £6o for each man.