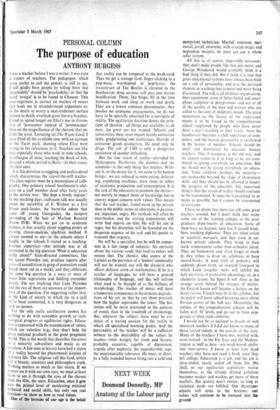 I was a teacher before I was a writer; I was even a trainer of teachers. The pedagogue, which some prefer to call the pedant, is still in me.

I will gladly bore people by telling them that `psychedelic' should be `psychodelic,' or that the

word 'assegai' is to be found in Chaucer. This

over-eagerness to correct on matters of minor fact leads me to misunderstand arguments or, in the desire to worry a near-irrelevant surface

feature to death, overlook great literary beauties. I tend to spend longer on Eliot's use in Geron- lion of Iuvescence' instead of 'juvenescence' than on the magnificence of the rhetoric that en- folds the error. Lecturing on The Waste Land, I

once filled all the available time with an account of the Tarot pack, showing where Eliot went wrong in his references to it. Teachers are like that, especially those who work in state schools. A colleague of mine, teaching the Book of Job, devoted a whole period to Boils: (a) their cause; (b) their cure.

It is this devotion to niggling and useless detail which characterises the run-of-the-mill teacher.

The class register must be a masterpiece of calli- graphy. One primary school headmaster's obit- uary on a staff member dead after forty years in the service was: 'She kept a lovely register.'

In my teaching days, staffroom talk was usually about the suitability of F. Wishart as a first fifteen pack-leader, the burnt-fat odour that came off young Georgiades, the inexpert peroxiding of the hair of Marlene Buzzard (Form 1VB). When we got on to academic matters, it was usually about niggling points of parsing, clause-analysis, algebraic method. It

always seemed to me—in the schools where I taught, in the schools I visited as a teaching- practice supervisor—that nobody was at all

interested in the big question 'What is education really about?' State-directed committees, like the recent Plowden one, produce reports after years of consultation (a gang of journalists could knock them out in a week), and they obfuscate the same big question in a mass or mess of sweet little aspirations and fiddling curricular

details. I'm not implying that Lady Plowden and the rest of them are unaware of the import-

ance of the question. I'm suggesting rather that, in the kind of society to which (as to a jail) we've been committed, it is very dangerous to seek an answer.

For the only really satisfactory answer has nothing to do with economic growth or tech- nological progress or egalitarian rights. Educa- tion is concerned with the transmission of values,

which are valueless (e.g., they don't help the gross national product) in the great pragmatic world. This is the world that describes literature as a minority sub-culture and music as an anodyne. A few men in history have had a vision

of a reality beyond the phenomenal kinema of

ordinary life. The religious call this God, artists call it beauty, scientists and philosophers truth. Nothing matters as much as this vision. If we cannot see it with our own eyes, we must at least learn to see it through the eyes of the chosen men, the elite, the seers. Education, once it gets past the primal level of inculcating minimal technical and social skills, has only one real function—to show us how to read values.

One of the heresies Of our age is the belief

that reality can be tempered to the weak-eyed. Thus we get a teenage God, finger-clicking to a pop-mass, worshipped in pop-lyrics; the travesty-art of The Beatles is elevated to the Beethovian; drug sessions will give you instant beatification. These, like bingo, fill in the time

between work and sleep or work and death. They are a lowest common denominator, they

involve no strenuous engagements, we do not have to be specially educated for a surrogate of reality. The egalitarian doctrine denies the prin- ciple of election: all things are available to all men; the great are not wanted. Schools and universities, then, must impart mainly utilitarian skills, gradgrinding out technicians. Outside of consumer goods production, life need only be drugs. The cult of LSD is only a dangerous caricature of secular orthodoxy.

But the true vision of reality—provided by Shakespeare, Beethoven, the painters and the scientists—is the only thing that matters. With- out it, or the desire for it, we cease to be human beings: we are reduced to mere eating, defecat- ing, copulating machines, mere items in tables of economic production and consumption. It is the task of the educators to promote the desire— not merely to impart items of knowledge but to convey urgent concern with values. This means that the real teacher, found more in the private than in the public sector of education, is passion- ate, impatient, angry. His methods will often be unorthodox, and the visiting inspectorate will write bad reports on him. He will hit out in rages, but his discipline will be founded on the desperate urgency of his task and his power to transmit that urgency.

He will be a specialist, but he will be compe- tent in a fair range of subjects: his curiosity about the various roads that lead to values will ensure that. The chemist who sneers at the Latinist as the purveyor of a 'useless' commodity will not be wanted, nor will the classicist who affects delicate scorn of mathematics. If he is a teacher of languages, he will have a general philosophy of language, and this will enliven what used to be thought of as the dullness of morphology. The teacher of music will have a humorous competence in the demotic degrada- tions of his art, so that he can show precisely how the higher supersedes the lower. The his- torian will be more interested in the patterns of events than in the treadmill of chronology. But, whatever the subject, there must be evi- dence of a tearing passion for the reality to which all specialised learning points. And the personality of the teacher will be a sufficient witness to the desirability of the values he teaches—vital, hungry for truth and beauty, probably eccentric, capable of depression, crapula after euphoria, the unpredictable rage, the unaccountable tolerance. He must, in short, be a fully rounded human being, not a cold and competent technician. Martial, venerean, mer- curial, jovial, saturnine, with uranian magic and neptunian insights, he must act out a whole solar system.

All this is, of course, impossible nonsense:

they don't make people like that any more, and George Woodcock would probably think it a bad thing if they did. But I think it is true that great educational systems have always been built on a cult of personality, and it is the personal element in teaching that is more and more being discounted. The talk is all of better organisation,

finer equipment, even of better holed and amor- phous sculpture in playgrounds, and not at all

of the quality of the men and women who are called to the cure of children's minds. The great monument to the heresy of the impersonal means is to be found in the comprehensive school (approved by people who have never done a day's teaching in their lives): there the headmaster becomes a chill supervisor of com- puters, and the human personality is swallowed • in the horror of number. Schools should be small and dominated by intensely human teachers. This, I recognise, is the old way, and we cannot return to it so long as we are com- mitted to giving everybody an education. But we should not be giving everybody an educa- tion. Some children—perhaps the majority— are ineducable beyond the stage of elementary skills, and they should not be allowed to hinder the progress of the educable. The important thing is that the vision of reality should continue to be transmitted. It must be transmitted to as many as possible, but it cannot be transmitted to everyone.

I have no doubt that there are still some great teachers around, but I don't think that many come out of the training colleges or the post- graduate departments of education. Some of them have no degrees; very few, I should think, have teaching diplomas. They are often artists or scientists mamma, and they work in un- known private schools. They bring to their work temperament rather than orthodox talent. They set homework and often forget to mark it; they refuse to draw up syllabuses or keep record-books. A mad kind of pedantry will suddenly gleam forth, an inspired transport in which Latin irregular verbs will exhibit the holy mysteries of prehistoric phonology, or, in a chemistry lesson, the figure 8 will shine as the strange secret behind the changes of matter. An English lesson will become a lecture on the haute cuisine. French may be in the syllabus, but the pupils will leave school knowing more about Persian poetry of the Sufi sect. Meanwhile, the victims of the comprehensive schools will be laden with '0' levels and go out to form pop- groups or plan train robberies.

I would not be so inclined to dream of such maverick teachers if I did not know so many of those reared tamely in the corrals of the state. Many of the teachers I have met, worked with, even trained—in the Far East and the Mediter- ranean as well as here—are weak-kneed, philis- tine time-servers. I know at least four head teachers who have not read a book since they left college. Education is a job, and the job is close-ended, neatly sealed off from life. We shall, as our egalitarian aspirations realise themselves, as the already diluted pabulum becomes weaker and weaker, get more of these teachers. But quality won't matter, so long as statistical needs are fulfilled. Our skyscraper schools will shine to the heavens, and values will continue to be stamped into the ground.