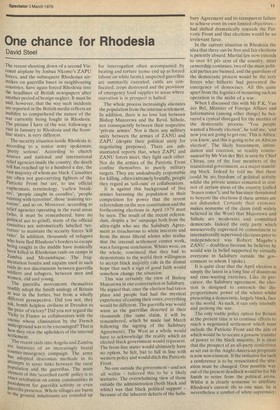 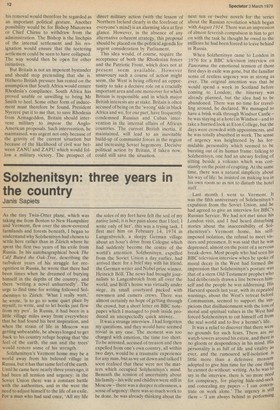 One chance for Rhodesia

The recent shooting down of a second Viscount airplane by Joshua Nkomo's ZAK.") forces, and the subsequent Rhodesian airstrikes on guerrilla bases in neighbouring countries, have again forced Rhodesia into the headlines of British newspapers after another period of benign neglect. It must be said, however, that the way such incidents are reported in the British media reflects an inability to comprehend the nature of the war currently being fought in Rhodesia. The picture I have of the war, following a visit in January to Rhodesia and the frontline states, is very different.

The security situation inside Rhodesia is, according to a senior army spokeman, 'pretty serious'. According ' to church sources and national and international relief agencies inside the country, the death toll has reached up to a hundred a day, the vast majority of whom are black. Casualties are often not gun-carrying fighters of the Patriotic Front but are, to use official euphemistic terminology, 'curfew breakers', 'people caught in crossfire', 'people running with terrorists', those 'assisting terrorists', and so on. Moreover, according to relief agencies operating in the rural areas (who, it must be remembered, have no Political axe to grind), many of the official casualties are automatically labelled 'terrorists' to maintain the security forces 'kill ratio'. In addition, thousands of refugees Who have fled Rhodesia's borders to escape being caught in the middle have ironically been killed in Rhodesian raids on camps in Zambia and Mozambique. The fragmentation bombs and napalm used in such raids do not discriminate between guerrilla soldiers and refugees, between men and women, old and young. The guerrilla movements themselves readily adopt the Smith analogy of Britain at war in the forties, but from a wholly different persepective. Did you not, they ask, bomb helpless civilians at Dresden as the price of victory? Did you not regard the Vichy in France as collaborators with the enemy whose elimination by the French underground was to be encouraged? That is how they view the upholders of the internal settlement.

The recent raids into Angola and Zambia are instances of an increasingly brutal Counter-insurgency campaign. The army has adopted draconian methods in its a"empts to sever links between the rural P°Pulation and the guerrillas. The main element of this 'scorched earth' policy is to exact retribution on entire communities in punishment for guerrilla activity or even 8uerrilla presence. Whole villages are burnt t° the ground, inhabitants are rounded up for interrogation often accompanied by beating and torture (some end up as forced labour on white farms), suspected guerrillas are summarily executed, cattle are confiscated, crops destroyed and the provision of emergency food supplies to areas where starvation is in prospect is halted.

The whole process increasingly alienates the population from the internal settlement. In addition, there is no love lost between Bishop Muzorewa and the Revd. Sithole, nor consequently between their respective 'private armies'. Nor is there any military unity between the armies of ZANU and ZAPU (despite their political unity for negotiating purposes). There are substantiated reports that, when ZAPU and ZANU forces meet, they fight each other. Nor do the armies of the Patriotic Front confine themselves to purely military targets. They are undoubtedly responsible for killing, often extremely brutally, people they regard as 'sell-outs' or collaborators.

It is against this background of five armies harassing the population in their competition for power that the recent referendum on the new constitution and the forthcoming elections in April 1979 must be seen. The result of the recent referendum, despite a `no' campaign both from the ultra-right who see the Salisbury Agreement as treacherous to white interests and from the more liberal whites who realise that the internal settlement cannot work, was a foregone conclusion. Whites were, on the whole, convinced that they had to demonstrate to the world their willingness to accept black majority rule in the dismal hope that such a sign of good faith would somehow change the situation. This was certainly the view of Bishop Muzorewa in our conversation in Salisbury. He argued that, once the election had taken place and people had had the mystical experience of casting their votes, everything would be different. The guerrilla war would wane as the guerrillas deserted in their thousands (the same claim, it will be remembered, which he made last March following the signing of the Salisbury Agreement). The West as a whole would have to acknowledge the reality which an elected black government would represent. The front-line states would ultimately have no option, he felt, but to fall in line with western policy and would ditch the Patriotic Front.

No one outside the government —and not all within — believed this to be a likely scenario: The overwhelming view of those outside the administration (both black and white) was that black political support — because of the inherent defects of the Salis bury Agreement and its transparent failure to achieve even its own limited objectives — had shifted dramatically towards the Patriotic Front and that elections would be an irrelevant farce.

In the current situation in Rhodesia the idea that there can be free and fair elections is patently absurd. Martial law now extends to over 85 per cent of the country, strict censorship continues, two of the main political parties are banned, and the guardians of the democratic process would be the very forces who hitherto had prevented the emergency of democracy. All this quite apart from the logistics of mounting such an operation in the midst of a war.

When I discussed this with Mr P.K. Van der Byl, Minister of Foreign Affairs and Information (among other things) he betrayed a cynical disregard for the niceties of the democratic process. 'You people wanted a bloody election', he told me, 'and now you are going to get one. This is Africa, you know, and this is going to be an African election'. The likely harassment, intimidation and coercion, so readily countenanced by Mr Van der Byl, is seen by Chief Chirau, one of the four members of the transitional government, as a major stumbling block. Indeed he told me that there could be no freedom of political activity whilst the private armies remained in control of certain areas of the country (called 'frozen zones'), and he has since threatened to boycott the elections if these armies are not disbanded. Certainly their existence makes nonsense of the claim (still widely believed in the West) that Muzorewa and Sithole are moderates and committed democrats. Indeed the only party which unreservedly expressed its commitment to internationally supervised elections prior to independence was Robert Magabe's ZANU — doubtless because he believes he would win (a belief supported by virtually everyone in Salisbury outside the government to whom I spoke).

It is quite clear that the April election is simply the latest in a long line of disastrous and time-wasting exercises. Like its precursor, the Salisbury agreement, the election is designed to entrench the disproportionate power of the whites whilst presenting a democratic, largely black, face to the world. As such, it can only intensify and prolong the war.

The only viable policy option for Britain at the present time is to continue efforts to reach a negotiated settlement which must include the Patriotic Front and the aim of which would be to secure a genuine transfer of power to the black majority. It is clear that the prospect of an all-party conference as set out in the Anglo-American proposals is now non-existent. If the initiative for such a conference is to be resuscitated the situation must be changed. One possible way out of the present deadlock would be for Mr Smith to retire from the political arena. Whilst it is clearly nonsense to attribute Rhodesia's current ills to one man, he is nevertheless a symbol of white supremacy; his removal would therefore be regarded as an important political gesture. Another possibility would be for Bishop Muzorewa or Chief Chirau to withdraw from the administration. The Bishop is the linchpin of the internal settlement and his resignation would ensure that the teetering settlement could be seen to have collapsed. The way would then be open for other initiatives.

But Britain is not an impotent bystander and should stop pretending that she is. Hitherto British pressure has rested on the assumption that South Africa would ensure Rhodesia's compliance. South Africa has proved unable or unwilling to bring Mr Smith to heel. Some other form of inducement must therefore be found. President Nyerere put it to me that, to save Rhodesia from Armageddon. Britain should intervene military to impose the AngloAmerican proposals. Such intervention, he maintained, was urgent not only because of the gravity of the current situation but because of the likelihood of civil war between ZANU and ZAPU which would follow a military victory. The prospect of direct military action (with the lesson of Northern Ireland clearly in the forefront of everyone's mind) is an alarming idea at first glance. However, in the absence of any alternative coherent strategy, this proposal should be placed on the political agenda for urgent consideration by Parliament.

This idea would, of course, require the acceptance of both the Rhodesian forces and the Patriotic Front, which does not at present seem available. However unsavoury such a course of action might seem, the West is being offered an opportunity to take a decisive role on a crucially important area and one moreover for which Britain is responsible and in which major British interests are at stake. Britain is often accused of being on the 'wrong' side in black Africa and we, for our part, have frequently condemned Russian and Cuban ' intervention in the internal affairs of African countries. The current British inertia, if maintained, will lead to an inevitable build-up of communist forces in the region and increasing Soviet hegemony. Decisive political action by Britain, if taken now, could still save the situation.