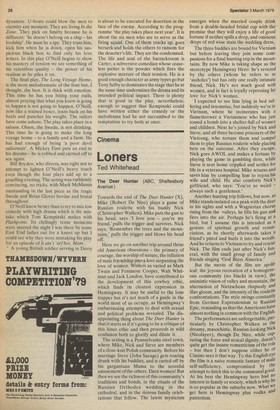 The Deer Hunter (ABC, Shaftesbury Avenue ) Towards the end of The Deer Hunter (X), Mike (Robert De Niro) plays a game of Russian roulette with his buddy Nick (Christopher Walken). Mike puts the gun to his head, says 'I love you — you're my friend,' pulls the trigger and survives. Nick says, `Remember the trees and the mountains,' pulls the trigger and blows his head off.

Here we go on another trip around those old American obsessions — the primacy of courage, the worship of nature, the inflation of male friendship into a love surpassing the love of women. Writers as varied as Mark Twain and Fenimore Cooper, Walt Whitman and Jack London, have contributed to the development of this cowboy ethic, which finds its clearest expression in Hemingway. It may be useful to the lone trapper but it's not much of a guide in the world most of us occupy, as Hemingway's embarrassing attempts to deal with sexual and political problems revealed. The disappointing thing about The Deer Hunter is that it starts as if it's going to be a critique of this loner ethic and then proceeds in wild confusion both to glorify and dilute it.

The setting is a Pennsylvania steel town, where Mike, Nick and Steve are members of a close-knit Polish community. Before his marriage Steve (John Savage) gets roaring drunk with his buddies, and is carted off by his gargantuan Mama to the scornful amusement of the others. Darn women! But then we see the richness of this community's traditions and bonds, in the rituals of the Russian Orthodox wedding in the cathedral, and in the riOtous family celebrations that follow. The latent mysticism emerges when the married couple drink from a double-headed bridal cup with the promise that they will enjoy a life of good fortune if neither spills a drop, and ominous drops of red wine stain the wedding dress.

The three buddies are bound for Vietnam but before leaving they join some companions for a final hunting trip in the mountains. By now Mike is taking shape as the stereotype Hemingway Hero: he's revered by the others (whom he refers to as 'assholes') but has only one really intimate friend, Nick. He's not much good with women, and in fact is loyally repressing his love for Nick's woman.

I expected to see him lying in bed suffering and insomniac, but suddenly we're in Vietnam, where he incinerates with a flamethrower a Vietnamese who has just tossed a bomb into a shelter-full of women and children. Next he's joined by Nick and Steve, and all three become prisoners of the Vietcong, who torture them and compel them to play Russian roulette while placing bets on the outcome. After they escape, Nick goes AWOL and makes a fortune by playing the game in gambling dens, while Steve is sent home crippled and settles for life in a veterans hospital. Mike returns and saves him by compelling him to rejoin his wife and child. He also comforts Nick's girlfriend, who says: 'You're so weird — always such a gentleman.'

Another hunting trip follows, but now, as Mike stands isolated on a peak with the deer in his sights and with a Wagnerian chorus rising from the valleys, he lifts his gun and fires into the air. Perhaps he's firing at a bird, but I assume this is intended as a gesture of spiritual growth and renunciation, as he shortly afterwards takes a friend's pistol and hurls it into the woods. And he returns to Vietnam to try and rescue Nick. The film ends just after Nick's funeral, with the small group of family and friends singing 'God Bless America.'

But the merits Of the film are apolitical: the joyous recreation of a homogeneous community (no blacks in view), the animistic vision of valley and mountain, the alternation of Nietzschean rhapsody and Slav gloom, and the intensity of the roulette confrontations. The style swings constantly from German Expressionism to Russian Epic, reminding us that the Americans have almost nothing in common with the English.

The performances are unforgettable, particularly by Christopher Walken as the dreamy, masochistic, Russian-looking Nick (Nicolayev), though De Niro, while capturing the force and stoical dignity, doesn t quite get the insane romanticism of the role — but then I don't suppose either he or Cimino sees it that way. To this English eye the film is a naive romantic fantasy of male self-sufficiency, compromised by the attempt to hitch this to the communal good. At his best the Hemingway hero had nn interest in family or society, which is why he is so popular in the suburbs now. What we get here is Hemingway plus vodka and patriotism.