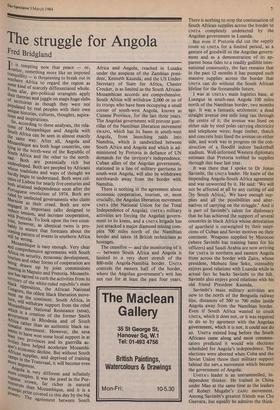 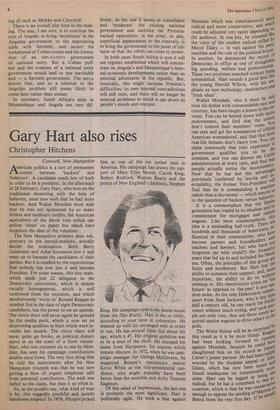 The struggle for Angola

Iti is tempting now that peace — or, rather, something more like an imposed tranquillity — is threatening to breakout in. southern Africa to regard the region as some kind of scarcely differentiated whole. From afar, geo-political strategists apply their theories and juggle on maps huge slabs of territories as though they were not Populated by real peoples with their own unique histories, cultures, thoughts, aspira- tions and inspirations. So, according to these analyses, the rela- tions of Mozambique and Angola with South Africa can be seen in almost exactly the same

way. After all, Angola and

lying are both huge countries, one Ong to the north-west of the Republic of South Africa and the other to the north- east. Both are potentially richbut undeveloped. Both are peopled by Africans hose traditions and ways of thought we har,d1Y begin to understand. Both were col- onies of Lisbon for nearly five centuries and both attained independence soon after the Portuguese revolution of 1974. Both are by unelected governments who claim 14„andsm as their creed. Both are now ,'gaged in important talks designed to reduce tension, and increase cooperation, ,1th Pretoria. To look upon the two coun- ;es, however, as identical twins is pro- bably to ensure that forecasts about the coming pattern of events in southern Africa will be wrong. aMozambique is easy enough. Very clear and comprehensive agreements with South e on security, economic development, tourism and other forms of cooperation are rn14eeting in drawn up by joint commissions clue has weed to and Pretoria. Mozambi- -- ,woreed to curb the activities from its territory of the white-ruled republic's main enck oPPosition, the African National n.,"ngress the oldest black liberation move- on the continent. South Africa, in il), will withdraw support from the rebel wk°.zarbbique National Resistance (MNR.), meh is a creation of the former Smith teti Inca government in Rhodesia and of South rather than an authentic black na- onalist Movement. However, the MNR Ms to have won some local support in at tw° quit,ies Provinces and its guerrilla ac.- have helped accelerate Mozambi- A ceS economic decline. But without South c'''rlean. supplies, and deprived of training Ps In the Transvaal, it will become even more Impotent. moAn 8°1a is very different and infinitely t„ `e omplex. It was the jewel in the Por- r."..guese crown, far richer in natural st7°11I-Cs than Mozambique, and it is a

prize powers, i covetagreed to this day by the big The ement between South Africa and Angola, reached in Lusaka under the auspices of the Zambian presi- dent, Kenneth Kaunda, and the US Under- Secretary of State for Africa, Chester Crocker, is as limited as the South African- Mozambican accords are comprehensive. South Africa will withdraw 2,000 or so of its troops who have been occupying a small corner of south-west Angola, known as Cunene Province, for the last three years. The Angolan government will prevent guer- rillas of the Namibian liberation movement SWAPO, which has its bases in south-west Angola, from launching raids into Namibia, which is sandwiched between South Africa and Angola and which is ad- ministered by Pretoria in defiance of UN demands for the territory's independence. Cuban allies of the Angolan government, stationed in a line of military garrisons in south-west Angola, will also be withdrawn northwards away from the border with Namibia.

There is nothing in the agreement about economic cooperation, tourism, or, most crucially, the Angolan liberation movement UNITA (the National Union for the Total Independence of Angola). UNITA's military activities are forcing the Angolan govern- ment to its knees, and a UNITA brigade has just attacked a major diamond mining com- plex 700 miles north of the Namibian border and taken 16 British technicians as hostages.

The ceasefire — and the monitoring of it — between South Africa and Angola is limited to a very short stretch of the 800-mile Angola-Namibia border. UNITA controls the eastern half of the border, where the Angolan government's writ has not run for at least the past four years. There is nothing to stop the continuation of South African supplies across the border to UNITA completely undetected by the Angolan government in Luanda. But even if Pretoria did cut the supply route to UNITA for a limited period, as a gesture of goodwill to the Angolan govern- ment and as a demonstration of its ap- parent bona fides to a readily gullible inter- national community, the fact remains that in the past 12 months it has pumped such massive supplies across the border that UNITA can do without the South African lifeline for the foreseeable future.

I was at UN1TA's main logistics base, at Luengue in south-east Angola 100 miles north of the Namibian border, two months ago. It was a fantastic settlement: a dead straight avenue one mile long ran through the centre of it; the avenue was lined on either side by steel poles carrying electricity and telephone wires; huge timber, thatch and concrete huts lined the avenue on either side, and work was in progress on the con- struction of a floodlit indoor basketball stadium. Well-informed Western diplomats estimate that Pretoria trebled its supplies through this base last year.

It was there that I spoke to Dr Jonas Savimbi, the UNITA leader. He knew of the impending Angola-South Africa agreement and was unworried by it. He said: 'We will not be affected at all by any cutting of aid [by South Africa]. We have enough sup- plies and all the possibilities and alter- natives of carrying on the struggle.' And it is part of Savimbi's talent for diplomacy that he has achieved the support of several countries in black Africa whose detestation of apartheid is outweighed by their suspi- cions of Cuban and Soviet motives on their continent. Weapons supplied by Morocoo (where Savimbi has training bases for his officers) and Saudi Arabia are now arriving for UNITA in northern and eastern Angola from across the border with Zaire, whose president, Mobutu Sese Seko, ostensibly enjoys good relations with Luanda while in actual fact he backs Savimbi to the hilt. Savimbi also enjoys good relations with his old friend President Kaunda, Savimbi's main military activities are now to the north of the Benguela railway line, distances of 500 to 700 miles inside Angola away from the Namibian border. Even if South Africa wanted to crush UNITA, which it does not, or it was required to do so by agrement with the Angolan government, which it is not, it could not do so. UNITA existed long before the South Africans came along and most commen- tators predicted it would win elections scheduled for Angola's independence. The elections were aborted when Cuba and the Soviet Union threw their military support behind the MPLA movement which became the government of Angola. UNITA's leader is an untrammelled, in- dependent thinker. He trained in China under Mao at the same time as the leaders of Robert Mugabe's ZANU movement. Among Savimbi's greatest friends was Che Guevara, but equally he admires the think- ing of such as Moltke and Churchill.

There is an overall plot here in the mak- ing. The aim, I am sure, is to continue the ruin of Angola: to bring 'moderates' in the Angolan government to the negotiating table with Savimbi, and secure the withdrawal of Cuban troops and the forma- tion of an MPLA-UN1TA government of national unity. But a Cuban pull- out and the creation of a national unity government would lead to one inevitable end — a Savimbi government. The MPLA knows that, and so a solution to the Angolan problem still seems likely to come later rather than sooner.

In summary, South Africa's aims in Mozambique and Angola are very dif- ferent. In the one it wants to consolidate and 'moderate' the existing national government and sacrifice the Pretoria- backed opposition: in the other, its aim, superficial appearances to the contrary, is to bring the government to the point of col- lapse so that the rebels can come to power.

In both cases South Africa is sure it will see regimes established which will concen- trate on Angola's and Mozambique's inter- nal economic developments rather than on external adventures in the republic. But, ironically, this might increase Pretoria's difficulties: its own internal contradictions will still exist, and there will no longer be external problems to which it can divert its people's minds and energies.