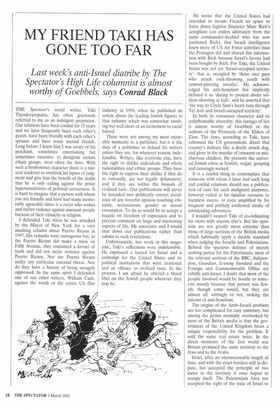 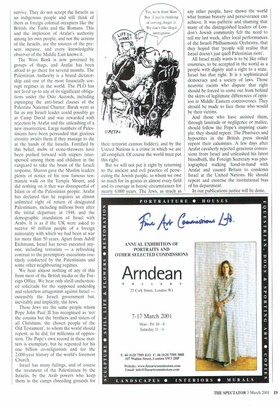 MY FRIEND TAKI HAS GONE TOO FAR

worthy of Goebbels, says Conrad Black THE Spectator's social writer, Taki Theodoracopulos, has often graciously referred to me as an indulgent proprietor. Our relations have been cordial for 15 years and we have frequently been each other's guests, have been friendly with each other's spouses and have many mutual friends. Long before I knew him I was aware of his penchant, sometimes entertaining but sometimes excessive, to denigrate certain ethnic groups, most often the Jews. With such a bonhomous character there is a natural tendency to overlook his lapses of judgment and give him the benefit of the doubt that he is only railing against the prissy hypersensitivities of political correctness. It is hard to imagine that a person with whom you are friendly and have had many memorably agreeable times is a racist who wishes and incites violence against innocent people because of their ethnicity or religion.

I defended Taki when he was attacked by the Mayor of New York for a very insulting column about Puerto Ricans in 1997. His remarks were outrageous but, as the Puerto Ricans did make a mess on Fifth Avenue, they contained a kernel of truth and did not incite violence against Puerto Ricans. Nor are Puerto Ricans under any particular external threat. Nor do they have a history of being savagely oppressed. In the same spirit I defended one of our other writers, William Cash, against the wrath of the entire US film industry in 1994, when he published an article about the leading Jewish figures in that industry which was somewhat insulting but well short of an incitement to racial hatred.

These were not among my most enjoyable moments as a publisher, but it is the duty of a publisher to defend his writers unless they are, for whatever reason, indefensible. Writers, like everyone else, have the right to dislike individuals and whole nationalities and ethnic groups. They have the right to express their dislike if they do so rationally, are not legally defamatory, and if they are within the bounds of civilised taste. Our publications will never be hounded into politically correct avoidance of any forceful opinion touching ethnicity, sectarianism, gender or sexual orientation. To do so would be to accept a muzzle on freedom of expression and to prevent comment on large and interesting aspects of life. My associates and I would shut down our publications rather than submit to such restrictions.

Unfortunately, last week in this magazine, Taki's reflections were indefensible. He expressed a hatred for Israel and a contempt for the United States and its political institutions that were irrational and an offence to civilised taste. In the process, I am afraid he uttered a blood libel on the Jewish people wherever they may be.

He wrote that the United States had intended to invade French air space to force down fugitive financier Marc Rich's aeroplane (on orders ultimately from the same commander-in-chief who has now pardoned Rich); that Israeli intelligence knew more of US Air Force activities than the Pentagon did and shared this information with Rich because Israel's favour had been bought by Rich. For Taki, the United States was not yet 'Israel-occupied territory'; that is, occupied by 'those nice guys who attack rock-throwing youth with armour-piercing missiles'. He acknowledged his anti-Semitism but implicitly defined it as 'daring to protest about soldiers shooting at kids', and he asserted that 'the way to Uncle Sam's heart runs through Tel Aviv and Israeli-occupied territory'.

In both its venomous character and its unfathomable absurdity, this farrago of lies is almost worthy of Goebbels or the authors of the Protocols of the Elders of Zion. The Jews, according to Taki, have suborned the US government, direct that country's military like a docile attack dog, and glory in the murder of innocent or mischievous children. He presents the universal Jewish ethos as brutish, vulgar, grasping and cunningly wicked.

It is a fearful thing to contemplate that someone with whom I have had such long and cordial relations should use a publication of ours for such malignant purposes, however veiled in his familiar recourse to harmless excess, or even amplified by his frequent and publicly confessed intake of intoxicating substances.

I wouldn't suspect Taki of co-ordinating his views with anyone else's. But his opinions are not greatly more extreme than those of large sections of the British media which habitually apply a double standard when judging the Israelis and Palestinians. Behind the spurious defence of merely seeking justice for the Palestinians, most of the relevant sections of the BBC, Independent, Guardian, Evening Standard and the Foreign and Commonwealth Office are rabidly anti-Israel. I doubt that most of the people involved would be hostile to someone merely because that person was Jewish, though some would, but they are almost all, wittingly or not, stoking the inferno of anti-Semitism.

The origins of the Arab—Israeli problem are too complicated for easy summary, but among the points normally overlooked by most of the British media is that the government of the United Kingdom bears a unique responsibility for the problem. It sold the same real estate twice. In the direst moments of the first world war Britain promised the same territory to the Jews and to the Arabs.

Israel, after an unconscionable length of time, and with the exact borders still in dispute, has accepted the principle of two states in the territory it once hoped to occupy itself. The Palestinians have not accepted the right of the state of Israel to survive. They do not accept the Israelis as an indigenous people and still think of them as foreign colonial occupiers like the British, the Turks and the Romans. This and the implosion of Arafat's authority among his own people, and not the actions of the Israelis, are the sources of the present impasse, and every knowledgable observer of the Middle East knows it.

The West Bank is now governed by groups of thugs, and Arafat has been afraid to go there for several months. The Palestinian Authority is a brutal dictatorship and one of the most financially corrupt regimes in the world. The PLO has not lived up to any of its significant obligations under the Oslo Accords, including expunging the anti-Israel clauses of the Palestine National Charter. Barak went as far as any Israeli leader could possibly go at Camp David and was rewarded with rejection by Arafat and the unleashing of a new insurrection. Large numbers of Palestinians have been persuaded that glorious eternity awaits them if they manage to die at the hands of the Israelis. Fortified by this belief, mobs of stone-throwers have been pushed forward with snipers interspersed among them and children in the vanguard to take the brunt of the Israeli response. Sharon gave the Muslim leaders plenty of notice of his now famous tenminute walk on the Temple Mount, and did nothing on it that was disrespectful of Islam or of the Palestinian people. Arafat has declared that he requires an almost unlimited right of return of designated Palestinians, including millions born after the initial departure in 1948, and the demographic inundation of Israel with Arabs. It is as if the UK were asked to receive 60 million people of a foreign nationality with which we had been at war for more than 50 years. Apart from Adolf Eichmann, Israel has never executed anyone, including terrorists — a refreshing contrast to the peremptory executions routinely conducted by the Palestinians and some other neighbouring regimes.

We hear almost nothing of any of this from most of the British media or the Foreign Office. We hear only shrill orchestrated solicitude for the supposed underdog and relentless antagonism against Israel — ostensibly the Israeli government but, inevitably and implicitly, the Jews.

These Jews are the same people whom Pope John Paul II has recognised as 'not the cousins but the brothers and sisters of all Christians, the chosen people of the Old Testament', to whom the world should repent, as he did, for millennia of oppression. The Pope's own record in these matters is exemplary, but he repented for his one billion co-religionists and for the 2,000-year history of the world's foremost Church.

Israel has many failings, and of course the treatment of the Palestinians by the Israelis, by the Arab powers who keep them in the camps (breeding grounds for their terrorist cannon fodder), and by the United Nations is a crime in which we are all complicit. Of course the world must put this right.

But we will not put it right by returning to the ancient and evil practice of persecuting the Jewish people, to whom we owe so much for its genius in almost every field and its courage in heroic circumstances for nearly 6,000 years. The Jews, as much as any other people, have shown the world what human bravery and perseverance can achieve. It was pathetic and shaming that many of the distinguished leaders of London's Jewish community felt the need to tell me last week, after local performances of the Israeli Philharmonic Orchestra, that they hoped that 'people will realise that Israel doesn't just quell Palestinian riots'.

All Israel really wants is to be like other countries, to be accepted in the world as a people with dignity and a right to a state. Israel has that right. It is a sophisticated democracy and a society of laws. Those neurotic racists who dispute that right should be forced to come out from behind the skirts of legitimate differences of opinion in Middle Eastern controversies. They should be made to face those who would be their victims.

And those who have assisted them, through lassitude or negligence or malice, should follow the Pope's inspiring example: they should repent. The Pharisees and hypocrites in the British press should repent their calumnies. A few days after Arafat cavalierly rejected generous concessions from Israel and unleashed his latest bloodbath, the Foreign Secretary was photographed walking hand-in-hand with Arafat and caused Britain to condemn Israel at the United Nations. He should repent and exorcise the institutional bias of his department.

In our publications justice will be done.