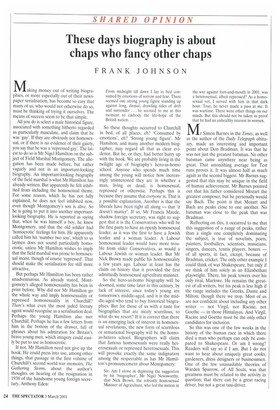 Page 24, 3 March 2001 — These days biography is about chaps who fancy other chaps
Close

These days biography is about chaps who fancy other chaps

Making money out of writing biographies, or more especially out of their newspaper serialisation, has become so easy that many of us, who would not otherwise do so, must be thinking of trying it ourselves. The means of success seem to be that simple.

All you do is select a male historical figure, associated with something hitherto regarded as particularly masculine, and claim that he was 'gay'. If they are obviously not homosexual, or if there is no evidence of their gaiety, you say that he was a 'repressed gay'. The latest to do so is Mr Nigel Hamilton on the subject of Field Marshal Montgomery. The allegation has been made before, but rather vaguely and not in an important-looking biography. An important-looking biography of the field marshal is what Mr Hamilton has already written. But apparently he felt inhibited from including the homosexual theme. For some reason, which he has not fully explained, he does not feel inhibited now, even though Montgomery's son is alive. So he is going to put it into another importantlooking biography. He is reported as saying that, when he was himself a boy, he knew Montgomery, and that the old soldier had tomoerotic' feelings for him. He apparently called him his 'number two son', which to us laymen does not sound particularly homoerotic, unless Mr Hamilton wishes to imply that the field marshal was prone to homosexual incest, though of course 'repressed'. That should make the serialisation fee still more attractive.

But perhaps Mr Hamilton has been rather unadventurous. As already stated, Montgomery's alleged homosexuality has been in print before. Why did not Mr Hamilton go the whole way and imply homosexuality or repressed homosexuality in Churchill? There's what even the most jaded literary agent would recognise as a serialisation deal. Perhaps the young Hamilton also met Churchill. Perhaps he has a few letters from him in the bottom of the drawer, full of phrases about his admiration for Britain's brave young men, which imagery could easily be put to use as homoerotic.

If not, Mr Hamilton need not give up the book. He could press into use, among other things, that passage in the first volume of Churchill's second world war memoirs, The Gathering Storm, about the author's thoughts on hearing of the resignation in 1938 of the handsome young foreign secretary, Anthony Eden:

From midnight till dawn I lay in bed consumed by emotions of sorrow and fear. There seemed one strong young figure standing up against long, dismal, drawling tides of drift and surrender . . . he seemed to me at this moment to embody the life-hope of the British nation... .

So these thoughts occurred to Churchill in bed, of all places, eh? 'Consumed by emotions', eh? 'Strong young figure'. Mr Hamilton, and many another modern biographer, may regard all that as clear evidence. But he, or they, had better hurry up with the book. We are probably living in the twilight age of biography's hero-as-homo school. Anyone who spends much time among the young will notice how increasingly uninterested they are in whether a man, living or dead, is homosexual, repressed or otherwise. Perhaps this is because they assume that everyone is. That is a possible explanation. Another is that the liberals have been right all along — that 'it doesn't matter'. If so, Mr Francis Maude, shadow foreign secretary, was right to suggest that it is the Conservatives who will be the first party to have an openly homosexual leader, as it was the first to have a Jewish leader and a woman leader. A Labour homosexual leader would have more trouble from older Conservatives, as would a Labour Jewish or woman leader. But Mr Nick Brown made public his homosexuality a few years ago. Labour at least has the claim on history that it provided the first admittedly homosexual agriculture minister.

So the hero-as-homo biography will be doomed, some time later in this century, by lack of interest, since today's young are tomorrow's middle-aged, and it is the middle-aged who tend to buy historical biographies. But for those of us with a taste for biographies that are nicely scurrilous, to what do we resort? If it is correct that there is an emerging lack of interest in homosexual revelations, the new form of scurrilous or sensational biography will be the homoas-hetero school. Biographers will claim that famous homosexuals were really heterosexuals or repressed heterosexuals. This will provoke exactly the same indignation among the respectable as has Mr Hamilton's pronouncement about Montgomery: Sir: Am I alone in deploring the suggestion by his 'biographer', Mr Nigel Newsworthy, that Nick Brown, the robustly homosexual Minister of Agriculture, who led the nation in the war against foot-and-mouth in 2001, was a heterosexual, albeit repressed? As a homosexual vet, I served with him in that dark hour. True, he never made a pass at me. It was wartime. There were other things on our minds. But this should not be taken as proof that he had an unhealthy interest in women.

Mr Simon Barnes in the Times, as well as the author of the Daily Telegraph obituary, made an interesting and important point about Don Bradman. It was that he was not just the greatest batsman. No other batsman came anywhere near being as great. That astonishing average for Test runs proves it. It was almost half as much again as the second biggest. Mr Barnes suggested that this may be unique in the field of human achievement. Mr Barnes pointed out that his father considered Mozart the greatest composer, but he personally would say Bach. The point is that Mozart and Bach are peaks close to one another. No batsman was close to the peak that was Bradman.

Reflecting on this, it occurred to me that this suggestion of a range of peaks, rather than a single one completely dominating the subject, is true of novelists, poets, painters, footballers, scientists, musicians, singers, dancers, tennis players, boxers — of all sports, in fact, except, because of Bradman, cricket. The only other example I could think of was Shakespeare, but only if we think of him solely as an Elizabethan playwright. There, his peak towers over his only rival, Marlowe. He remains the greatest of all writers, but his peak is less high if the range includes the Greeks, Dante and Milton; though there we stop. Most of us are not confident about including any other writer — not Virgil, not Racine, not Goethe — in those Himalayas. And Virgil, Racine and Goethe must be the only other candidates for inclusion.

So this was one of the few weeks in the history of the human race in which there died a man who perhaps can only be compared to Shakespeare. Or am I wrong? Readers will say so if I am. But I do not want to hear about uniquely great cooks, gardeners, dress designers or businessmen. One of the few unassailable theories of Warden Sparrow, of All Souls, was that greatness must be related to the activity in question; that there can be a great racing driver, but not a great taxi-driver.