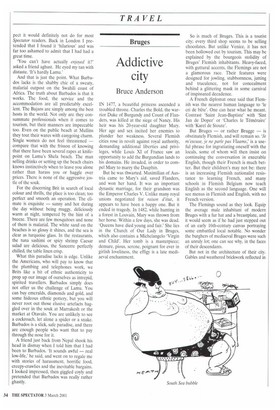 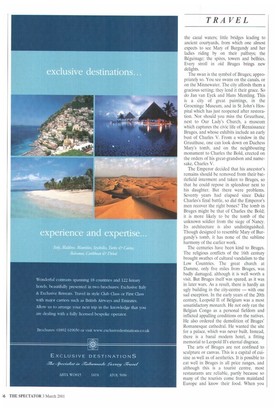 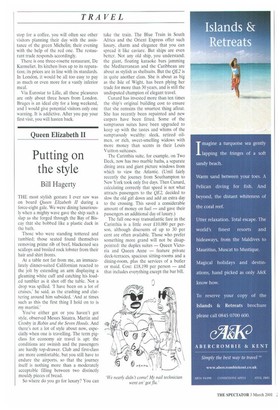 IN 1477, a beautiful princess ascended a troubled throne. Charles the Bold, the warrior Duke of Burgundy and Count of Flanders, was killed at the siege of Nancy. His heir was his 20-year-old daughter Mary. Her age and sex incited her enemies to plunder her weakness. Several Flemish cities rose in revolt against royal authority, demanding additional liberties and privileges, while Louis XI of France saw an opportunity to add the Burgundian lands to his domains. He invaded, in order to compel Mary to marry the Dauphin.

But he was thwarted. Maximilian of Austria came to Mary's aid, saved Flanders, and won her hand. It was an important dynastic marriage, for their grandson was the Emperor Charles V. Unlike many royal unions negotiated for raison d'etat, it appears to have been a happy one. But it ended in tragedy. In 1482, while hunting in a forest in Louvain, Mary was thrown from her horse. Within a few days, she was dead. 'Queens have died young and fair.' She lies in the Church of Our Lady in Bruges, which also contains a Michelangelo `Virgin and Child'. Her tomb is a masterpiece; demure, pious, serene, poignant for ever in girlish loveliness, the effigy is a late mediaeval enchantment.

So is much of Bruges. This is a tourist city; every third shop seems to be selling chocolates. But unlike Venice, it has not been hollowed out by tourism. This may be explained by the bourgeois stolidity of Bruges' Flemish inhabitants. Heavy-faced, with guttural accents, the Flemings are not a glamorous race. Their features were designed for jowling, stubbornness, jutting and truculence, not for concealment behind a glittering mask in some carnival of inspissated decadence.

A French diplomat once said that Flemish was the nearest human language to 'le cri de bête'. One can hear what he meant. Contrast `Saint Jean-Baptiste' with `Sint Jan de Doper' or `Charles le Temeraire' with `Karel de Stoute'.

But Bruges — or rather Brugge — is obstinately Flemish, and will remain so. `Je m'excuse, je ne pane pas Viaams,' is a useful phrase for ingratiating oneself with the locals, some of whom will then insist on continuing the conversation in execrable English, though their French is much better. But their children's may not be: there is an increasing Flemish nationalist resistance to learning French, and many schools in Flemish Belgium now teach English as the second language. One will see menus in Flemish and English, with no French version.

The Flemings sound as they look. Equip the average male inhabitant of modern Bruges with a fur hat and a breastplate, and it would seem as if he had just stepped out of an early 16th-century canvas portraying some embattled local notable. No wonder the burghers of mediaeval Bruges were such an unruly lot; one can see why, in the faces of their descendants.

But not in the architecture of their city. Gables and weathered brickwork reflected in the canal waters; little bridges leading to ancient courtyards, from which one almost expects to see Mary of Burgundy and her ladies riding by on their palfreys; the Beguinage; the spires, towers and belfries. Every stroll in old Bruges brings new delights.

The swan is the symbol of Bruges; appropriately so. You see swans on the canals, or on the Minnewater. The city affords them a gracious setting; they lend it their grace. So do Jan van Eyck and Hans Memling. This is a city of great paintings, in the Groeninge Museum, and in St John's Hospital which has just reopened after restoration. Nor should you miss the Gruuthuse, next to Our Lady's Church, a museum which captures the civic life of Renaissance Bruges, and whose exhibits include an early bust of Charles V. From a window in the Gruuthuse, one can look down on Duchess Mary's tomb, and on the neighbouring monument to Charles the Bold, erected on the orders of his great-grandson and namesake, Charles V.

The Emperor decided that his ancestor's remains should be removed from their battlefield interment and taken to Bruges, so that he could repose in splendour next to his daughter. But there were problems. Seventy years had elapsed since Duke Charles's final battle, so did the Emperor's men recover the right bones? The tomb in Bruges might be that of Charles the Bold; it is more likely to be the tomb of the unknown soldier from the siege of Nancy. Its architecture is also undistinguished. Though designed to resemble Mary of Burgundy's tomb, it has none of the sublime harmony of the earlier work.

The centuries have been kind to Bruges. The religious conflicts of the 16th century brought swathes of cultural vandalism to the Low Countries. The great church at Damme, only five miles from Bruges, was badly damaged, although it is well worth a visit. But Bruges itself was spared, as it was in later wars. As a result, there is hardly an ugly building in the city-centre — with one sad exception. In the early years of the 20th century, Leopold II of Belgium was a most unsatisfactory monarch. He not only ran the Belgian Congo as a personal fiefdom and inflicted appalling conditions on the natives. He also ordered the demolition of Bruges' Romanesque cathedral. He wanted the site for a palace, which was never built. Instead, there is a banal modern hotel, a fitting memorial to Leopold II's eternal disgrace.

The arts of Bruges are not confined to sculpture or canvas. This is a capital of cuisine as well as of aesthetics. It is possible to eat well in Bruges in all price ranges, and although this is a tourist centre, most restaurants are reliable, partly because so many of the tourists come from mainland Europe and know their food. When you stop for a coffee, you will often see other visitors planning their day with the assistance of the green Michelin; their evening with the help of the red one. The restaurant trade responds accordingly.

There is one three-rosette restaurant, De Karmeliet. Its kitchen lives up to its reputation; its prices are in line with its standards. In London, it would be all too easy to pay as much or even more for a vastly inferior meal.

Via Eurostar to Lille, all these pleasures are only about three hours from London. Bruges is an ideal city for a long weekend, and I would give potential visitors only one warning. It is addictive. After you pay your first visit, you will hasten back.