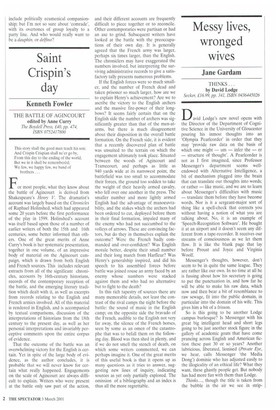 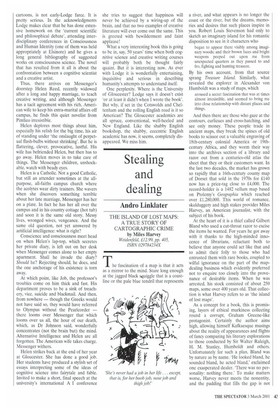 THINKS . . . by David Lodge Secker, £16.99, pp. 341, ISBN 0436445026 David Lodge's new novel opens with the Director of the Department of Cognitive Science in the University of Gloucester pouring his inmost thoughts into an 'Olympia Pearlcorder' in order that they may 'provide raw data on the basis of which one might — urn — infer the — er — structure of thought'. A Pearlcorder is not as I first imagined, since Professor Messenger's department seems wellendowed with Alternative Intelligence, a bit of mechanism plugged into the brain that can translate our thoughts into words; or rather — like music, and we are to learn about Messenger's difficulties with music — translate them before they have become words. Nor is it a sergeant-major sort of thing like a spell-check that corrects you without having a notion of what you are talking about. No, it is an example of 'Speech-Recognition Software'. He bought it at an airport and it doesn't seem any different from a tape-recorder. It receives our streams of consciousness as we let them flow. It is like the blank page that lay before Proust and Joyce and Virginia Woolf.

Messenger's thoughts, however, don't seem to be in quite the same league. They are rather like our own. In no time at all he is fussing about how his secretary is going to put the punctuation in, and how far he will be able to make his raw data, which now and then bear a bit of resemblance to raw sewage, fit into the public domain, in particular into the domain of his wife. This gives him a bit of a frisson.

So is this going to be another Lodge campus burlesque? Is Messenger with his great big intelligent head and short legs going to be just another stock figure in the gallery of academic goats that have come prancing across English and American fiction these past 30 or so years? Another lubricious, liberated, lionised (Private Eye, we hear, calls Messenger 'the Media Dong') dominie who has adjusted easily to the illogicality of an ethical life? What they want, these ghastly people get. But nobody has had more fun with them than Lodge.

Thinks..., though the title is taken from the bubble in the air we see in strip

cartoons, is not early-Lodge farce. It is pretty serious. In the acknowledgments Lodge makes clear that he has done extensive homework on the 'current scientific and philosophical debate', attending interdisciplinary conferences in Consciousness and Human Identity (one of them was held appropriately at Elsinore) and he gives a long general bibliography of suggested works on consciousness science. The novel that has resulted from it all is about the confrontation between a cognitive scientist and a creative artist.

Thus, there arrives on Messenger's doorstep Helen Reed, recently widowed after a long and happy marriage, to teach creative writing, and although Messenger has a tacit agreement with his rich, American wife to keep his extra-marital affairs off campus, he finds this quiet novelist from Pimlico irresistible.

Helen deplores most things about him, especially his relish for the big time, his air of standing under 'the onslaught of perpetual flash-bulbs without shrinking'. But he is flattering, clever, provocative, lustful. His wife has befriended Helen, but then has to go away. Helen moves in to take care of things. The Messenger children, unshockable, watch with beady eyes.

Helen is a Catholic. Not a good Catholic, but still an attender sometimes at the allpurpose, all-faiths campus church where the acolytes wear dirty trainers. She wavers when she discovers something terrible about her late marriage, Messenger has her on a plate. In fact he has her all over the campus and in his country cottage (hot tub) and soon it is the same old story. Messy lives, wronged wives, vengeance. And the same old question, not yet answered by artificial intelligence: what is right?

Conscience and consciousness meet head on when Helen's lap-top, which secretes her private diary, is left out on her desk when Messenger comes alone to her empty apartment. Shall he invade the diary? Should he? Rejecting should, he does, and the one anchorage of his existence is torn away.

At which point, like Job, the professor's troubles come on him thick and fast. His department proves to be a sink of treachery, vice, suicide and blackmail. And then, from nowhere — though the Greeks would not have said so, they would have referred to Olympus without the Pearlcorder — there looms over Messenger that which looms over us all, the hour of our death, which, as Dr Johnson said, wonderfully concentrates (not the brain but) the mind. Alternative Intelligence and Helen are all forgotten. The American wife takes charge. Messenger withers.

Helen strikes back at the end of her year at Gloucester. She has done a good job. Her students have produced a stylish set of essays interpreting some of the ideas of cognitive science into fairytale and fable. Invited to make a short, final speech at the university's international A I conference she tries to suggest that happiness will never be achieved by a wiring-up of the brain, and that no two examples of creative literature will ever come out the same. This is greeted with bewilderment and faint applause!

What a very interesting book this is going to be in, say, 50 years' time when both cognitive science and creative writing courses will probably both be thought fairly quaint. But it is interesting now. As ever with Lodge it is wonderfully entertaining, inquisitive and serious in describing humanity's attempts to understand itself.

One perplexity. Where is the University of Gloucester? Lodge says it doesn't exist 'or at least it didn't when I wrote the book'. But why, if set in the Cotswolds and Cheltenham and the rolling English road is it so American? The Gloucester academics are all spruce, conventional, well-heeled and New England. Like the shabby English bookshop, the shabby, eccentric English academic has now, it seems, completely disappeared. We miss him.