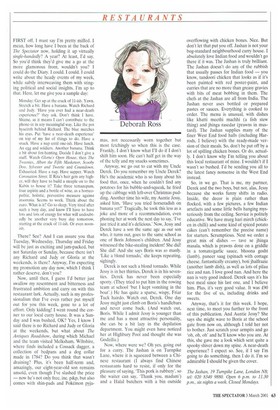 FIRST off, I must say I'm pretty miffed. I mean, how long have I been at the back of The Spectator now, holding it up virtually single-handedly? A year? At least, I'd say. So you'd think they'd give me a go at the more glamorous front, wouldn't you? I could do the Diary. I could. I could. I could write about the heady events of my week, while subtly interweaving them with stinging political and social insights. I'm up to that. Here, let me give you a sample day:

Monday: Get up at the crack of 11-ish. Yawn. Stretch a bit. Have a banana. Watch Richard and Judy. 'Have you ever had a near-death experience?' they ask. Don't think I have. Shame, as it means I can't contribute to the phone-in in any meaningful way. Like the pot hyacinth behind Richard. The blue matches his eyes. Put 'have a near-death experience' on top of my list of things to do. Have a snack. Have a nap until one-ish. Have lunch. An egg and soldiers. Another banana. Think a bit about fox-hunting. Decide I don't give a stuff. Watch Gloria's Open House, then The Tweenies, Albert the Fifth Musketeer, Scooby Doo, Sylvester and Tweetie and Countdown. Exhausted. Have a nap. Have supper. Watch Coronation Street. If Rita's hair gets any higher, will they have to build a steeple on to the Rabin to house it? Take three temazepam, four aspirin and a bottle of wine, as a homeopathic. holistic, preventive measure against insomnia. Seems to work. Think about the euro. What is it? Go to sleep. Very tired after such a busy day, and know I'll have to have Lots and lots of energy for what will undoubtedly be another very busy day tomorrow, starting at the crack of 11-ish. Or even noonish.

There? See? And I can assure you that Tuesday, Wednesday, Thursday and Friday will be just as exciting and jam-packed, but not Saturday or Sunday, because there isn't any Richard and Judy or Gloria at the weekends, is there? Anyway, I'm expecting my promotion any day now, which I think I rather deserve, don't you?

Now, until then, I guess I'd better just swallow my resentment and bitterness and frustrated ambition and carry on with this restaurant lark. Actually, such is my professionalism that I've even rather put myself out for you this week, gone to a lot of effort. Only kidding! I went round the corner to our local curry house. It was a Sunday and I was bushed, OK? Yes, I know I said there is no Richard and Judy or Gloria at the weekends, but what about The Antiques Roadshow, during which Michael and the team visited Melksham, Wiltshire, where finds included a Cossack dagger, a collection of bedpans and a dog collar made in 1784? Do you think that wasn't draining? Plus, it's been half-term and, amazingly, our eight-year-old son remains unsold, even though I've slashed the price — now he's not only free, inc. p&p, but also comes with shin-pads and Pokemon pyja

mas, not necessarily worn together but most fetchingly so when this is the case. Frankly, I don't know what I'll do if I don't shift him soon. He can't half get in the way of the telly and my snacks sometimes.

Anyway, we go out to eat with my Uncle Derek. Do you remember my Uncle Derek? He's the academic who is so fussy about his food that, once, when he couldn't find any potatoes for his bubble-and-squeak, he fried up the cabbage with left-over Christmas pudding. Another time his wife, my Auntie Jessy, asked him, 'Have you tried horseradish on banana yet?' Tragically, he took this less as a joke and more of a recommendation, even phoning her at work the next day to say, 'I've just tried it and it's delicious.' Now, Jessy and Derek have a son the same age as our son who, it turns out, goes to the same school as one of Boris Johnson's children. And Jessy witnessed the bike-stealing incident! She did! She did! And she says Boris was so manly. 'Like a blond tornado,' she keeps repeating, sighingly.

Derek is not such a blond tornado. While Jessy is in her thirties, Derek is in his seventies. Derek has never been especially sporty. (They tried to put him in the rowing team at school 'but I kept vomiting in the boat'.) He has quite a sparse, wispy, Friar Tuck hairdo. Watch out, Derek. One day Jessy might just climb on Boris's handlebars and never come back. (And watch out, Boris. While I admit Jessy is younger than me and has a most attractive personality, she can be a bit lazy in the depilation department. You might even have noticed her at Highbury Pool and thought she was Godzilla.)

Now, where were we? Oh yes, going out for a curry. The Jashan is on Turnpike Lane, where it is squeezed between a Chinese restaurant (I always find Chinese restaurants hard to resist, if only for the pleasure of saying, 'This pork is rubbery', so the waiter can say, 'Thank you, madam') and a Halal butchers with a bin outside

overflowing with chicken bones. Nice. But don't let that put you off. Jashan is not your bog-standard neighbourhood curry house. I absolutely love Indian food and wouldn't go there if it was. The Jashan is truly brilliant. The Jashan doesn't do any of the rubbish that usually passes for Indian food — you know, tandoori chicken that looks as if it's been painted with red poster-paint, and curries that are no more than greasy gravies with bits of meat bobbing in them. The chefs at the Jashan are all from India. The Jashan never uses bottled or prepared pastes or sauces. Everything is cooked to order. The menu is unusual, with dishes like khatti meethi machhi (a fish stew thing) and jhinga rasedar (prawns in mustard). The Jashan supplies many of the finer West End food halls (including Harrods, I believe) with the ready-made version of their meals. So, don't be put off by a lot of spilling chicken bones. Or do, actually. I don't know why I'm telling you about this local restaurant of mine. I wouldn't if I wasn't so bushed. I'd be sending you all to the latest fancy nonsense in the West End instead.

So, in we go. That is me, my partner, Derek and the two boys, but not, alas, Jessy because she works funny shifts in radio. Inside, the decor is plain rather than flocked, with a few pictures, a few Indian artefacts and some little bells hanging mysteriously from the ceiling. Service is politely educative. We have murg hari mirch (chicken in chilli) and some kind of spiced potato cakes (can't remember the precise name) for starters. Scrumptious. Next we order a great mix of dishes — tave se jhinga masala, which is prawns done on a griddle in a tomato/garlic sauce, bhoona gosht (lamb), paneer saag (spinach with cottage cheese, fantastically creamy), boti jhalfrazie (another lamb dish), as well as lots of pilau rice and nan. I love good nan. And here the nan is very good indeed. Derek says it's his best meal since his last one, and I believe him. Plus, it's very good value. It was £90 for the five of us, including drinks and sweets.

Anyway, that's it for this week. I hope, next time, to meet you further to the front of this publication. And Auntie Jessy? She says she might wave to Boris at the school gate from now on, although I told her not to bother. Just scratch your armpits and go 'oh, oh, oh* and he'll know who you are. At this, she gave me a look which sent quite a spooky shiver down my spine. A near-death experience? I expect so. See, if I say I'm going to do something, then I do it. I'm so admirable I should be given the cover.