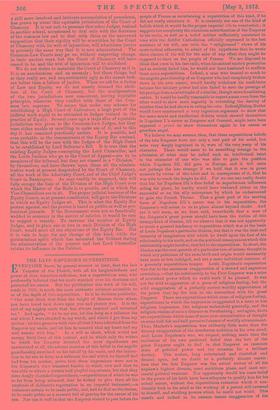 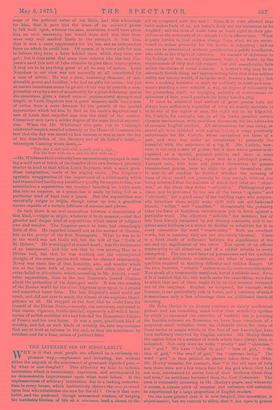 EVERYONE knew, by general rumour at least, that the late Emperor of the French, with all his longheadedness and power of slow, tenacious reflection, was a superstitious man, who profoundly believed that his uncle watched over his destinies and protected his career. But the publication this week of his will, made in 1865, is much the most authentic evidence accessible to us of the depth of this superstition. In it he declares positively, "One must think that from the height of Heaven those whom you have loved look down upon you and protect you. It is the soul of my mighty uncle that has always inspired and sustained me." And again, "As to my son, let him keep as a talisman the seal which I wore attached to my watch, and which I got from my mother ; let him preserve with care all that I have inherited from the Emperor my uncle, and let him be assured that my heart and my

soul remain with him." In a will so short, which would not occupy forty lines of this journal, and in which only the wishes to which the Emperor attached the most significance are enumerated at all, the solemn mention of this belief in the angelic guardianship exercised on his behalf by his uncle, and the injunc- tion to his son to keep as a talisman the seal which he himself had had from his mother, prove that these impressions were not in the Emperor's view transient fancies to which now and then he was able to attach a certain half-playful importance, but that they were deeply cherished superstitions,--superstitions of which he was so far from being ashamed, that he wished to give them all the emphasis of deliberate registration in an imperial testament,—a testament certain to be made public, and, had he died on the throne, to he made public at a moment full of gravity for the career of his son. Nor can it well be that the Emperor wished to pose before the people of France as entertaining a superstition of this kind, if he did not really entertain it. It is certainly not one of the kind of

beliefs which it would bathe proper imperial role to counterfeit ; it suggests too completely the conscious subordination of the Emperor to his uncle, as well as a belief neither sufficiently consistent in tone with the dutiful Catholicism officially expressed in the last sentence of his will, nor with the " enlightened " views of his more radical adherents, to admit of the hypothesis that he wrote these clauses of his will for the sake of any effect they might be supposed to have on the people of France. We are disposed to think that even in his last exile, when his sainted uncle's protection had so entirely failed him, he would not have hesitated to reaffirm these same superstitions. Indeed, a man who trusted so much to the angelic guardianship of an Emperor who had completely broken down in his own career, would hardly withdraw his confidence because the tutelary power had also failed to save the ,prestige of his protege from a catastrophe of.a similar, though more humiliating nature. It would be hardly reasonable to expect amen even from the other world to show more sagacity in overruling the destiny of another than he had shown in ruling his own. IndeediBishop Butler would have constructed a very ingenious argument to show that the same moral and intellectual defects which showed themselves in Napoleon L's career as Emperor and General, might have been expected a priori to show themselves again in his career as guardian angel.

We believe we may assume, then, that these superstitious beliefs of the late Emperor were not only a real part of his mind, but were very deeply ingrained in it, were of the very:warp of his character. There would seem to be something strange in the admission of what may be called such an intellectual taint in the character of one who was able to gain the position which Napoleon III. did gain in Europe, and it will seem not perhaps the less strange if we hold that it was in great measure by virtue of this taint and in consequence of it, that he was able to reach the height he did. For no one can really doubt that but for Napoleon IlL's firm belief in superhuman influences aiding his plans, he hardly would have ventured either on the successful or on the silly enterprises by which he endeavoured to gain the French Throne. That a great part of the moving force of Napoleon III.'s career was in his superstition, the Emperor's will seems to us to place almost beyond doubt. And yet it will seem, as we have said, remarkable that a man of the Emperor's great power should have been the victim of this strange kind of illusion, till we observe that it was not apparently so much a general tendency to superstition which was at the basis of Louis Napoleon's particular illusion, but that it was the heat and intensity of imagination with which he dwelt upon the fact of his relationship to his uncle, and on the political consequences which this relationship might involve, that led to the superstition. In short, the illusion was the over-growth of a particular vein of intense thought in which any politician of the same birth and origin would necessarily have more or less indulged, and not a mere individual instance of a generally superstitious temper. Louis Napoleon's superstition was due to the enormous exaggeration of a shrewd and sagacious conviction,—that his relationship to the First Emperor was a mine of unworked power which he could work if he pleased. It was not the wild exaggeration of a germ of religious feeling, but the wild exaggeration of a perfectly correct worldly appreciation of the power that lay for him in the connection with the great Emperor. There are superstitions which come of religious feeling, superstitions in which the impression exaggerated is a more or less religious impression, like religious melancholy generally, and the religious visions of such a dreamer as Swedenborg ; and again, there are superstitions which come of mere over-concentration of thought on some half-felt and half -perceived chance of -worldly advancement. Thus, Macbeth's superstition was evidently little more than the dreamy exaggeration of the murderous ambition in his own mind. And Louis Napoleon's was, we suspect, nothing more than the exaltation of his own profound belief that the heir of the great Emperor ought to find in that Emperor an immense store of political power and the occasion for a brilliant destiny. This notion, long entertained and cherished and dreamt upon, led no doubt to a perfectly sincere convic- tion that the late Emperor was the actual author of all his nephew's highest dreams, most ambitious, plans, and most suc- cessful political ventures. Nor apparently would his mere belief in the power of his birth have been adequate to qualify him for his actual career, without the superstitious extension which it con- tinually took in his mind as the working of a potent will external to himself, and wielding powers which he could not wield. This unsafe and indeed in its essence insane exaggeration of his sense of the political value of his birth, had this advantage for him, that it gave him the sense of an unlimited power to fall back upon, whereas the sane conviction would have given him no such assurance, but would have told him that there were very well marked limits to the strength it lent him, that it was a mere opportunity for his use, not an independent force on which he could lean. Of course it is never safe for men to believe they have a force behind them which they have not got ; but it does seem that some slow natures like the late Em- I peror's need this sort of false stimulus to give them staying-power, if they are to be anything great at all as men of action. Louis Napoleon in our view was not naturally at all constituted for a man of action. He was a slow, hesitating dreamer, of con- siderable powernnd lucidity, who had no gifts for action ; but just as nature sometimes seems to go out of her way to provide a com- pensation even by a sort of monstrosity for a great deficiency, just as she sometimes gives a dwarf arms of preternatural strength and length, so Louis Napoleon was in great measure made into a man of action from a mere dreamer by the growth of the morbid superstition which led him to find in his uncle's departed soul a sort of fetish that impelled him into the thick of the contest. Commoner men have a milder degree of the same kind of supersti- tion. When the Mr. Whitbread who gave rise to Canning's celebrated couplet, recalled solemnly to the House of Commons the fact that the day was sacred to him because it was at once the day of the foundation of the Brewery and of his father's death,— whereupon Canning wrote down,— "This day I still hail with a smile and a sigh.

For his beer with an e, and his bier with an —Mr. Whitbread had evidently been unconsciously engaged in mak- ing a mild sort of fetish of the founder of his own fortunes, precisely similar in kind to that which Louis Napoleon, with a more gran- diose imagination, made of his mighty uncle. The Emperor's egotistic exaggeration of the importance of a relationship which had transmitted hardly any hereditary quality for empire to him, was nevertheless a superstition the constant brooding on which made him into an emperor, as a queen-bee is made by being fed on a particular kind of food into a queen. But the superstition was essentially vulgar in origin, though taken up into a grandiose nature capable of a certain loftiness of manner and phrase.

In fact, there is no real connection between a superstition of this kind,—vulgar in origin, whatever it be in manner,—and that grander and deeper kind of superstition which comes of religious awe and wonder. The Emperor seems to have had exceedingly little of this. He regarded himself not as the servant of Heaven, but as the protégé of the first Buonaparte. What he was to do in the world was not God's will, but the will of the "Exile of St. Helena." He worshipped at second-hand ; was the instrument of an instrument; and felt not that he was serving Man as a Divine tool, but that he was working out the uncompleted thought of the coarse genius with whom he claimed relationship. Never was there less of that humility, awe, and wonder which are at the basis both of true worship, and often also of that extra-belief or Abe rglaube, which, according to Mr. Arnold, consti- tutes superstition, than in the late Emperor's heated illusions about the protection of his demi-god uncle. It was the worship of the Roman world for the divus Augustus over again in a cruder and somewhat baser form. The late Emperor's mind could not reach, and did not care to reach, the throne of the supreme Omni- potence at all. He stopped at the best idol he could form for himself of the Divine Ruler,—namely, the caricature contained in that coarse, vigorous, fertile-minded, supremely self-willed incar- nation of selfish ambition who had founded the Democratic Empire of France and his own house. It was a poor, pinchbeck kind of worship, and led, as such kinds of worship do, into superstitions that are at least as ruinous in the end, as they are sometimes, by accident and for a time, mines of political force.