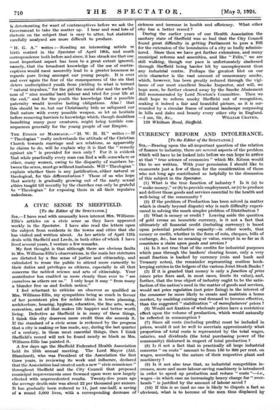 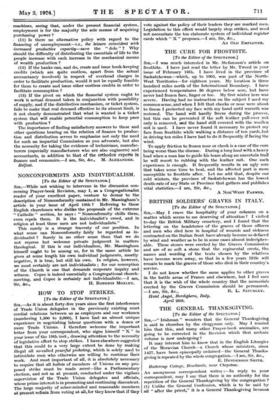 [To the Editor of the SracTaros.] SIR,—Bearing upon the all-important question of the relation of finance to industry, there are several aspects of the problem Which will have to be looked into before we can hope to arrive at that " true science of economics " which Mr. Kitson would like to see written. With your permission I should like to enumerate just a few of them for the consideration of those who not long ago contributed so helpfully to the discussion of this subject in the Spectator.

(1) What is the true function of industry ? Is it (a) to " make money," or (b) to provide employment, or (c) to produce and deliver those goods and services essential to the health and well-being of the community ?

(2) If the problem of Production has been solved (a matter which is clearly beyond dispute) why is such difficulty experi- enced in solving the much simpler problem of Distribution ?

(3) What is money or credit ? Leaving aside the question of gold versus an isometric currency, is it not a fact that ultimately all financial credit (including currency) is based upon potential productive capacity—in other words, that money or credit, whether in the form of coin, cheques, bills of exchange, &c., has no meaning or value, except in so far as it constitutes a claim upon goods and services ?

(4) Is it not true that of the credits for industrial purposes which pass through the bankers' clearing house, only a very small fraction is backed by currency (coin and bank and Treasury notes), the remainder representing costless book- keeping entries in the ledgers of the various Joint Stock Banks ?

(5) If it is granted that money is only a function of price (since price fixes and, in most cases, limits its value), and, further, that the true object of industry ought to be the satis- faction of the nation's need in the matter of goods and services, would not price regulation (not price fixing) in the interest of the consumer be more likely to create and maintain a home market, by enabling existing real demand to become effective, than the suggested " stabilization " of manufacturers' prices ?

(8) Would not fixation of wholesale prices have a restrictive effect upon the volume of production, which would naturally be reflected in consumption ?

(7) Since all costs (including profits) must be included in prices, would it not be well to ascertain approximately what proportion of total costs is represented by the total wages, salaries, and dividends (the total purchasing power of the community) disbursed in respect of total production ?

(8) Is it not a fact that in practically all large industrial concerns " on costs " amount to from 150 to 300 per cent. on wages, according to the nature of their respective plant and machinery ?

(9) Is it not also true that, as industrial competition in- creases, more and more labour-saving machinery is introduced in order to speed up production and reduce " costs "--i.e., wages—in which case an increasingly heavy charge for " over.

heads " is justified by the amount of labour saved ? _ (10) If this is so (and no one is likely to dispute a fact so _obvious), what is to become of the men thus displaced by machines, seeing that, under the present financial system, employment is for the majority the sole means of acquiring purchasing power ?

(11) Is there no alternative policy with regard to the financing of unemployment—i.e., the leisure coincident with increased productive capacity—save the " dole " ? Why should the difficulty of distributing the essentials of life to the people increase with each increase in the mechanical means of wealth production ?

(18) If the pivot on which the financial system ought to work is actual demand taken in conjunction with possibility of supply, and if the distributive mechanism, or ticket system, fails to make that real demand effective to its utmost limit, is it not clearly demonstrated that what is wanted is a ticket system that will enable potential consumption to keep pace with production ?

The importance of finding satisfactory answers to these and other questions bearing on the relation of finance to produc- tion and distribution serves to emphasize not only the need for such an impartial Commission as you advocate, but also the necessity for taking the evidence of technicians, manufac- turers (especially manufacturers who are also engineers) and accountants, in addition to that of the orthodox experts in finance and economics.—I am, Sir, &c., M. ALEXANDER. Belfast.