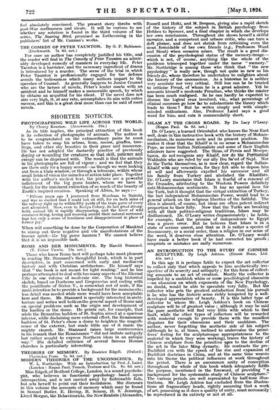 ROME AND HER MONUMENTS. By Harold Stannard. (T. Fisher Unwin.

Those who know Rome best will perhaps take most pleasure in reading Mr. Stannard's thoughtful book, which is in part descriptive, in part concerned with early and mediaeval history and with Christian architecture. He himself says that the book is not meant for light reading." and he has perhaps attempted to deal with too many aspects of the Eternal City in one volume of moderate size. The long historical sketch, based on Duchesne and Gregorovius and ending with the pontificate of Sixtus V., is somewhat out of scale, -if the main intention be to provide a background for the monuments ; less detail was needed while more would have been acceptable here and there. Mr. Stannard is specially interested in archi- tecture and writes well both on the general aspect of Rome and, on special problems such as the origin and development of the basilica or the dome. He points out, for example, that while the Byzantine builders of St. Sophia aimed at a spacious interior, while disdaining mere external effect, the Renaissance builders of St. Peter's chose a dome to heighten the magnifi- cence of the exterior, but made little use of it inside, the mighty church. Mr. Stannard raises large controversies, in his remark that the Renaissance " did not imitate antiquity' but rather sought to express Northern ideas in an antique way.". His detailed criticism of several famous Roman churches is particularly interesting.