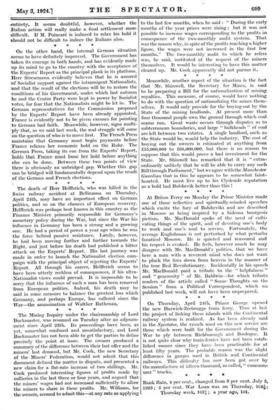 Page 3, 3 May 1924 — On the other hand, the internal German situation seems to
Close

On the other hand, the internal German situation seems to

have definitely improved. The Government has taken its courage in both hands, and has evidently made up its mind to go to the country with the acceptance of the Experts' Report as the principal plank in its platform. 'Herr Stresemann evidently believes that he is assured rof Socialist support against the intransigent Nationalists, and that the result of the elections will be to restore the ,conditions of his Government, under which last autumn he and the Centre Party were kept in power by Socialist votes, for fear that the Nationalists might be let in. The German representatives for the Commission proposed by the Experts' Report have been already appointed. 'France is evidently not to be given excuses for pointing to German bad faith. Meanwhile, however, signs multi- ply that, as we said last week, the real struggle will come • on the question of who is to move first. The French Press maintains that Germany must begin payments before ;France relaxes her economic hold on the Ruhr. The German Press, taking its cue from the Experts' Report, :holds that France must loose her hold before anything else can be done. Between these two points of view there is obviously an unbridged gap. Whether this gap can be bridged will fundamentally depend upon the result of the German and French elections.