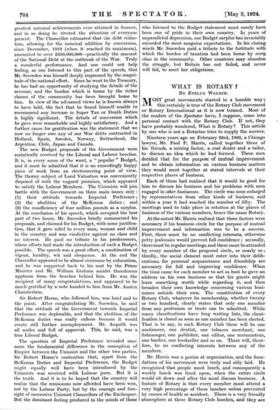 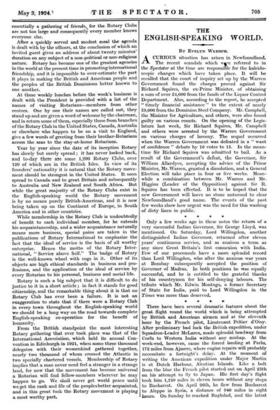 MOST great movements started in a humble way.; this certainly is true of the Rotary Club movement or Rotary International as it is now termed. " Most of the readers of the Spectator have, I suppose, come into personal contact with the Rotary Club. If not, they have probably wondered, What is Rotary ? This article by one who is not a Rotarian tries to supply the answer.

Nineteen years ago on February 23rd, 1905, a Chicago lawyer, Mr. Paul P. Harris, called together three of his friends, a mining factor, a coal dealer and a tailor, to discuss an idea which he had formed. These men decided that for the purpose of mutual improvement and to obtain information on various business matters they would meet together at stated intervals at their respective places of business.

Each of them had realized that it would be good for him to discuss his business and his problems with men engaged in other businesses. The circle was soon enlarged by representatives from other kinds of business, and within a year it had reached the number of fifty. The meetings used to take place in rotation at-the places of business of the various members, hence the name Rotary.

At the outset Mr. Harris realized that three factors were necessary if his business circle for the purpose of mutual improvement and information was to be a success. First, there must be no conflicting interests, otherwise petty jealousies would prevent full confidence ; secondly, theremust be regular meetings, and these must be attended by every member of the proposed circle, or nearly so ; thirdly, the social element must enter into their delib- erations, for personal acquaintance and friendship are necessary for full and improving confidence. When the time came for each member to act as host he gave an address on his own business so that his guests might learn something worth while regarding it, and thus broaden their own knowledge concerning various busi- nesses outside their own. The constitution of every Rotary Club, whatever its membership, whether twenty or two hundred, clearly states that only one member from any profession or trade can be admitted. While many classifications have long waiting lists, the classi- fication is closed as soon as one member has been elected. That is to say, in each Rotary Club there will be one auctioneer, one dentist, one tobacco merchant, one fishmonger, one publisher, one editor, one restaurateur, one banker, one bookseller and so on. 'There will, there- fore, be no conflicting interests between any of the members.

Mr. Harris was a genius at organization, and the foun- dations of his movement were truly and ably laid. He recognized that people must lunch, and consequently a weekly lunch was fixed upon, when the entire circle would sit down and after the meal discuss business. A feature of Rotary is that every member must attend a very high percentage of these lunches unless prevented by causes of health or accident. There is a very friendly atmosphere at these Rotary Club lunches, and they are essentially a gathering of friends, for the Rotary Clubs are not too large and consequently every member knows everyone else.

After a quickly served and modest meal the agenda is dealt with by the officers, at the conclusion of which an invited guest gives an address of about twenty minutes' duration on any subject of a non-political or non-religious nature. Rotary has become one of the greatest agencies in the world at the present time in promoting international friendship, and it is impossible to over-estimate the part it plays in making the British and American people and the peoples of the British Dominions better known to one another.

At these weekly lunches before the week's business is dealt with the President is provided with a list of the names of visiting Rotarians—members from other centres. One by one their names are called out, they stand up and are given a word of welcome by the chairman, and in return some of them, especially those from branches of the Rotary Club in the United States, Canada, Australia or elsewhere who happen to be on a visit to England, give a few words of greeting from their brother-Rotarians across the seas to the stay-at-home Rotarians- Year by year since the date of its inception Rotary has slowly but surely spread ; it has never looked back, and to-day there are some 1,200 Rotary Clubs, over 120 of which are in the British Isles. In view of its founders' nationality it is natural that the Rotary move- ment should be strongest in the United States. It soon spread to Canada and to great Britain and subsequently to Australia and New Zealand and South Africa. But while the great majority of the Rotary Clubs exist in the English-speaking world the Rotary movement is by no means purely British-American, and it is now being taken up on the Continent of Europe,. in South America and in other countries.

While membership in the Rotary Club is undoubtedly, of benefit to each individual member, for he extends his acquaintanceship, and a wider acquaintance naturally means more business, special pains are taken in the publications of Rotary International to emphasize the fact that the ideal of service is the basis of all worthy enterprise. Hence the motto of the Rotary Inter- national, " Service above Self." The badge of Rotary is the well-known wheel with cogs in it. Other of its objects are high ethical standards in business and pro- fessions, and the application of the ideal of service by every Rotarian to his personal, business and social life.

Rotary is such a big subject that it is difficult to do justice to it in a short article ; in fact it stands for good citizenship, and the remarkable thing about it is that no Rotary Club has ever been a failure. It is not an exaggeration to state that if there were a Rotary Club in every town throughout the English-speaking world we should be a long way on the road towards complete English-speaking co-operation for the benefit of humanity.

From the British standpoint the most interesting Rotary gathering that ever took place was that of the International Association, which held its annual Con- ventian. in Edinburgh in 1921, when some three thousand delegates with their womenkind gathered together, nearly two thousand of whom crossed the Atlantic in two specially chartered vessels. Membership of Rotary implies that a man never need feel a stranger in a strange land, for now that the movement has become universal a Rotarian will find fellow-members wherever he may happen to go. We shall never get world peace until we get the rank and file of the peoples better acquainted, and in this great task the Rotary movement is playing a most worthy part.