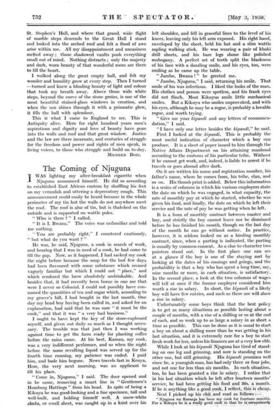 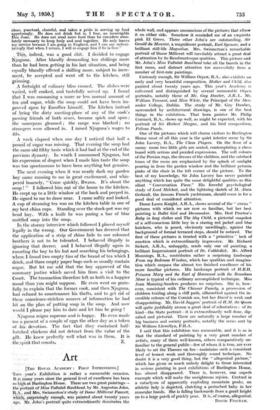 Page 10, 3 May 1930 — The Coming of Njuguna T WAS lighting my after-breakfast cigarette
Close

The Coming of Njuguna T WAS lighting my after-breakfast cigarette

when Njuguna announced himself. He did so according to established East African custom by shuffling his feet on my verandah and uttering a deprecatory cough. This announcement could easily be heard because in the whole perimeter of my tin hut the walls do not anywhere meet the roof. The roof is also of tin, but is thatched on the outside and is supported on wattle poles.

"It is I, Bwana." The Voice was unfamiliar and told me nothing.

- "You are probably right," I countered cautiously, "hut what do you want ? "

• He was, he said, Njuguna, a cook in search of work, and hearing that I was in need of a cook, he had come to till the gap. Now, as it happened, I had sacked my cook the night before because the soup for the Iasi few days had been flavoured with some substance which seemed vaguely familiar but which I could not "place," and which rendered the brew absolutely undrinkable. And besides that, it had recently been borne in one me that were I never so Colonial, I could not possibly have con- sumed the quantities of tea and sugar which, according to my grocer's bill, I had bought in the last month. One day my head boy having been called in, and asked for an explanation, had said that he was sure "it must be the cook," and that it was "a very bad business."

I ought to have kept the key of the store-cupboard myself, and given out daily as much as I thought neces- sary. The trouble was that just then I was working against time to get the farm ready for planting coffee before the rains came. At his best, Kaman, my cook, was a very indifferent performer, and so when the night before the same revolting liquid was served up for the fourth time running, my patience was ended. I paid him, and bade him begone. News travels fast in Kenya, Here, the very next morning, was an applicant to fill his place. - • "Come in,, Njuguna," I said. The door opened and in he came, removing a smart line in "Gentlemen's Homburg Hattings " from his head. In spite of being a Kikuyu he was good-looking and a fine specimen, tall and well-built, and holding himself well. A snow-white shuka, or small sheet, was caught up in a knot over his left shoulder, and fell in graceful lines to the level of his knees, leaving only his left arm exposed. His right hand, enveloped by the sheet, held his hat and a slim wattle sapling walking stick. He was wearing a pair of khaki drill shorts, and his bare legs shone like polished mahogany. A perfect set of teeth split the blackness of his face with a daziling smile, and his eyes, too, were smiling as he came up the table.

" Jambo, Njuguna," I said, returning his smile. That smile of his was infectious. I liked the looks of the man. His clothes and person were spotless, and his frank eyes did not flinch. Most Kikuyus smile little mechanical smiles. But a Kikuyu who smiles unprovoked, and with his eyes, although he may be a rogue, is probably a lovable rogue, and worth trying.

"Give me your kipandi and any letters of recommen- dation," I said.

"I have only one letter besides the kipandi," he said.

First I looked at the kipandi. This is probably the most useful indication of character which a boy can produce. It is a sheet of paper issued to him through the Native Affairs Department on his attaining manhood according to the customs of his particular tribe. Without it he cannot get work, and, indeed, is liable to arrest if he travels or goes abroad after dark.

On it are written his name and registration number, his father's name, where he comes from, his tribe, clan, and so on. His thumb print is added. Below this information is a series of columns in which his various employers state the date on which he was engaged, in what capacity, the rate of monthly pay at which he started, whether he was given his food, and finally, the date on which he left their 'service and the rate of pay he was getting when he left.

It is a form of monthly contract between master and boy, and strictly the boy cannot leave nor be dismissed before he has finished his month, though on the last day of the month he can go without notice. In practice, however, it is seldom looked on as a binding monthly contract, since, when a parting is indicated, the parting is usually by common consent. As a clue to character two pointers stand out. In the first place one can sec at a glance if the boy is one of the staying sort by looking at the dates of his comings and goings, and the probability is that a boy who has spent a long time; say, nine months or more, in each situation, is satisfactory. In the second place, a look at the two columns of wages will 'tell at once if the former employer considered him worth a rise in salary. In short, the kipandi of a likely boy will have few entries, and such as there are will show a rise in salary.

Unfortunately some boys think that the best policy is to get as Many situations as possible lasting about a couple of months, with a rise of a Shilling or so 'at the end of each, and so work up to as large a salary in as short a time as possible. This can be done as it is usual to start a boy on about a shilling more than he was getting in his last situation, and it is extremely rare for a boy to start fresh work for less, unless his finances are at a very low ebb.

While I look at his kipandi Njuguna has tired of stand- ing on one leg and grinning, and now is standing on the other one, but still grinning. His kipandi promises well since he, a youngish man, has had only three or four jobs, and not one for less than six months. In each situation, too, he has been granted a rise in salary. I notice that in his last situation which he left after fourteen months' service, he had been getting his food and Ws; a Month. If he is anything. like a good cook, I reflect, this is cheap.

Next I picked up his chit and read as follows :— "Njuguna wfrl Karanja has been my cook for fourteen months. For a 'Kikuyu he is a rea,11)i good cook in that he is;se.rupulou54r clean, punctual, cheerful, and takes a pride in serving up food appetisingly. He does not drink but is, I fear, an incorrigible Don Juan. He does not steal more food than he considers abso- lutely necessary to keep body and soul togethor. He only leaves my service because I am going to England, and I can say unhesi- tatingly that when I return, I will re-engage him if he is free."

.This,., indeed, . was a good Chit. I deCided to engage Njuguna. After blandly, demanding, ten shillings more than he had been getting, in his last situation, and being equally blandly offered a shilling more, subject to incre- ment, he accepted and went off to the kitchen, still grinning. A fortnight of culinary bliss ensued. The dishes were varied, well cooked, and . tastefully . served up. I found that I was: consuming a more or less normal amount of tea and .sugar,, while the soup could not have been im- proved upon by Escoffier himself.. The kitchen instead of ,beipg the dirty meeting-place of any of the cook's passing friends of both sexes, became spick and span ; the saucepans gleamed ; the range was blacked ; no strangers were allowed in. I raised Njuguna's wages to 35s.

. A week_ elapsed when one day I noticed that half a pound. of sugar was missing. That evening the soup' had the same old filthy taste which it had had at the end of the previous dynasty. In wrath I summoned Njuguna, but his expression of disgust when I made him taste the soup was too spontaneous to have been anything but genuine.

The next evening when it was nearly dark my garden boy. came running to me in great excitement, and whis- pered hoarsely, "Come quickly, Bwana. It's about the soup I" I followed him out of the house to the kitchen. He crept up to a little window at the back and peeped in. He signed to me to draw near. .1 came softly and looked. A cup of steaming tea was on the kitchen table in one of my best china cups. Standing over the stock-pot was my head boy. With a knife he was paring a bar of blue mottled soap into the Soup.

Inthe stormy interview which followed I.,,placed myself legally in the wreng. Our GoVernnient has decreed that the application of a strip of rhino hide to our coloured brothers is not to be tolerated. .I behaved illegally in ignoring that decree; and I behaved illegally again in escorting the boy to his hut and searching his belongings, where I found two empty tins of the brand of tea which I drink, and three empty paper bags such as usually contain sugar, But let me add that the boy approved of the summary justice which saved him from a visit to the Court. The transaction therefore left us both in a happier mood, than you might suppose. He even went on grate- fully to explain that the former .cook, and then, Njuguna, had refused to countenance his thefts, and to get rid of these conscience-stricken sources of information he had hit on the plan of putting soap in the soup. And now :would.I please pay him to date and let him be going ?

. • Njuguna reigns supreme and is happy. He even made me. a. present of a couple of eggs the other day as a token of this devotion. The fact that • they contained half- hatched chickens did not detract from the value of the gift. .11e.knew perfectly well what was in them. It is